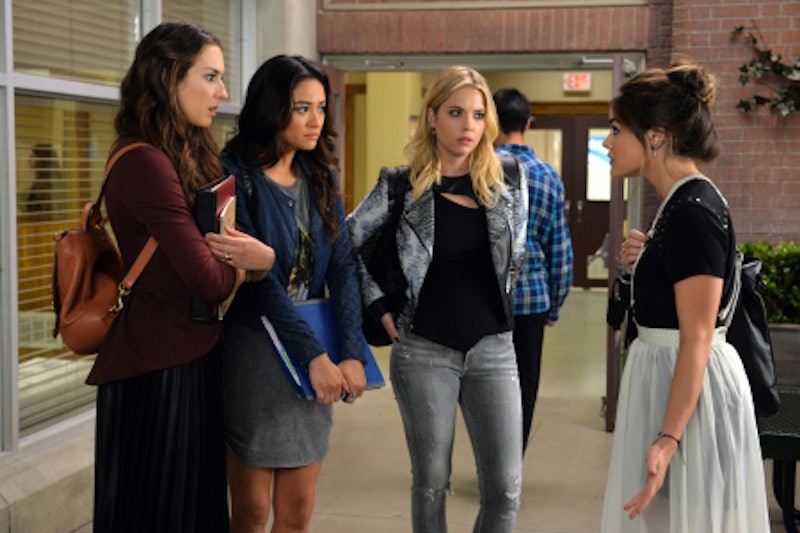 Leave it to Mona to leave us Pretty Little Liars fans wanting more, am I right? In last week's episode, the Liars got a message from the (possibly) dearly departed Mona Vanderwaal by way of a cryptic note she left in her room. Obviously, the Internet exploded with ideas about what it all meant, and many thought it was an anagram of "Charles DiLaurentis." Another theory floated around that Mona's note was actually an anagram for "Rachel S. DiLaurentis," and I am firmly of that camp.

Adding another man to the Pretty Little Liars roster, no matter who he is related to, seems a bit off to me. Even if Charles is Ali’s son (we’ll get to the child theory in a bit), I sincerely think that the writers would choose for Ali to have a daughter and not a son. The men on the show are the catalysts to some of the drama, but they're nearly never the source of it all. Case in point? Mike Montgomery was causing the liars some grief when he was trying to track Mona down, but if Mona never faked her own death, we wouldn't be having this conversation. It's all about the (cold-hearted, backstabbing) ladies on this show.

So, if the lines in Mona's note are indeed meant to spell out "Rachel S. DiLaurentis," the next question is clearly Rachel's identity. It’s obviously all in the family (mostly because Ali and Rachel share the same last name), so I’m thinking that there are really just two options.

In the Pretty Little Liars book series, Ali had a twin sister, Courtney, who Ali had committed because Courtney was prettier and more popular. (Oh, Ali, never change.) It seems like Marlene King has let this ship sail, partly because it's been way too long in the series to introduce an Ali twin now, and partly because it's really, truly what the audience is beginning to expect. I honestly don't think it could be a non-twin sister. The only way it would make be interesting is if, Mr. Hastings fathered the baby like he did with Jason. Spencer could have another mean, crazy sister! Plus, Ali already has almost-twins in CeCe Drake and the late Bethany Young, and how many bratty blonde girls can we jam into one show? Pass.

Ah, now we're getting somewhere. The summer that Ali and CeCe spent with “Board Shorts” Ali was afraid that she was pregnant. While as viewers, we were told that it didn't happen and that she wasn’t pregnant, what if it did happen? Screwing with timelines a little bit, I am willing to venture a guess that Ali got pregnant, hid it as long as she could, and her time spent with her grandmother in Georgia was actually when she gave birth. Where is this baby now? Maybe Ali gave it up for adoption, and this is the secret that A has been tormenting her with since day one. Is A threatening to expose Ali's secret love child? If so, who's the daddy? God, please don't let it be Ezra (though, as an Ezria hater I probably wouldn't mind all that much).

Rachel S. DiLaurentis, where (and who) are you? Mona doesn’t give clues for fun, so any anagrams that fans are pulling from her note must mean something. The PLL writers are loving this analysis of the show, by the way. Writer Bryan Holdman tweeted something about Charles DiLaurentis last week, egging viewers on:

Bryan, why won't you tell us?! Hopefully they’ll wrap it up before the season ends... in just two episodes.

More like this
What Is A "Hot Girl Book" & Why Is Everyone Talking About Them?
By Samantha Leach
What Is 'Pretty Wild' Star Tess Taylor Up To Now?
By Morgan Leigh Davies
At 14, Jurnee Smollett Was Taking Meetings With Missy Elliot & Lauryn Hill
By Chloe Foussianes
Shonda Rhimes' Net Worth Makes Her One Of The Wealthiest People In TV History
By Hugh McIntyre
Get Even More From Bustle — Sign Up For The Newsletter