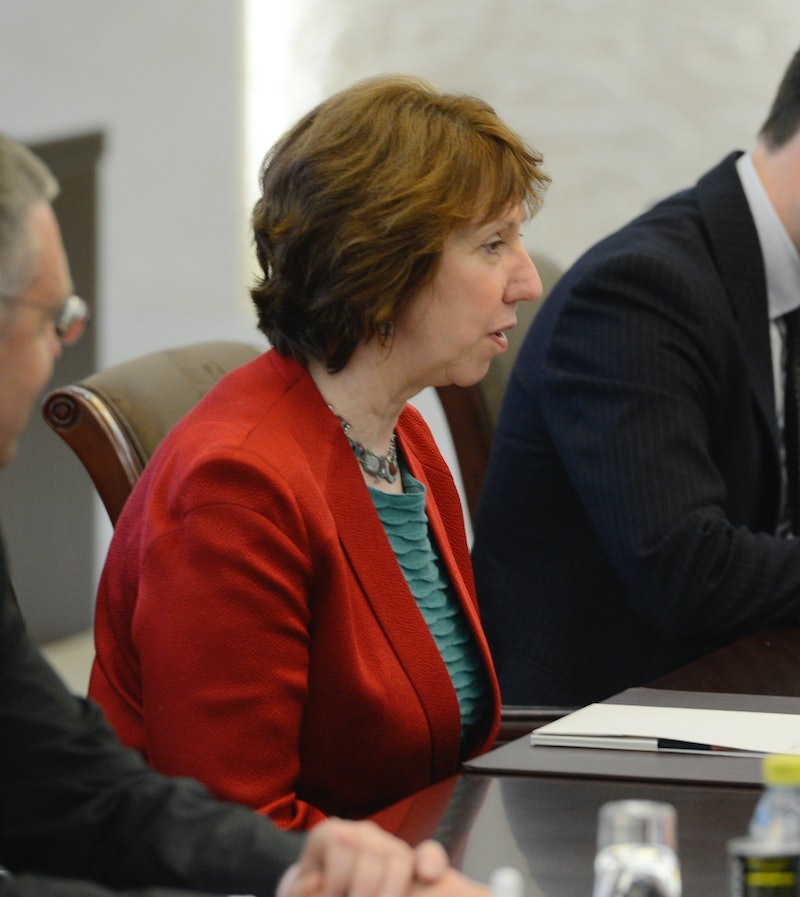 The spirit of 'cautious optimism' that surrounded yesterday's nuclear talks with Iran in Geneva has given way to one of downright positivity, delegates are reporting Wednesday. The second and final day of nuclear talks between six world powers and Iran began today after a slight delay for the P5+1 group to talk further among themselves before opening negotiations with Iran.

Although details of the conference are confidential, Iran's hour-long PowerPoint, titled 'Closing an unnecessary crisis, opening new horizons,' reportedly included several proposals about their nuclear program, which they maintain is peaceful. Michael Mann, the spokesman for EU Foreign Policy Chief Catherine Ashton who's leading the P5+1 talks, even went so far as to call the presentation "very useful." Other members of the world power P5+1 group (which includes representatives from the United States, Russia, China, France and Britain, plus Germany) said they were also impressed with the presentation and pleased with Iran's cooperation.

Although the specific points of the PowerPoint remain confidential, it's thought that they include several concessions by the state, one of which, Iran state media hinted, could be a reduction in uranium production. That would meet one of P5+1's negotiation demands — the other key one being that Iran allow what are essentially spot checks as part of a "comprehensive verification regime."

Araqchi seemed to confirm that these points were part of Iran's proposals, saying that "Neither of these issues are within the first step [of the Iranian proposal] but form part of our last steps."

Ultimately, delegates from P5+1 want to create a plan that ensures Iran is never able to create nuclear weapons. In return, sanctions that have been imposed for decades would be lifted. It's one of the first times Iran has been this cooperative — a new stance that is largely credited to the nation's new, more moderate president, Hassan Rouhani, whose campaign platform included getting rid of international sanctions and ending Iran's isolation. These nuclear talks are the first since his election.

Although Iran seems willing to make concessions, Araqchi said they're not the only ones who will have to give a little.

“Without a change in their attitude, it would be difficult to move forward,” he said yesterday.

Iranian news agency Tasnim reports that a joint comment from Iran and P5+1 will be issued at the conclusion of today's talks.