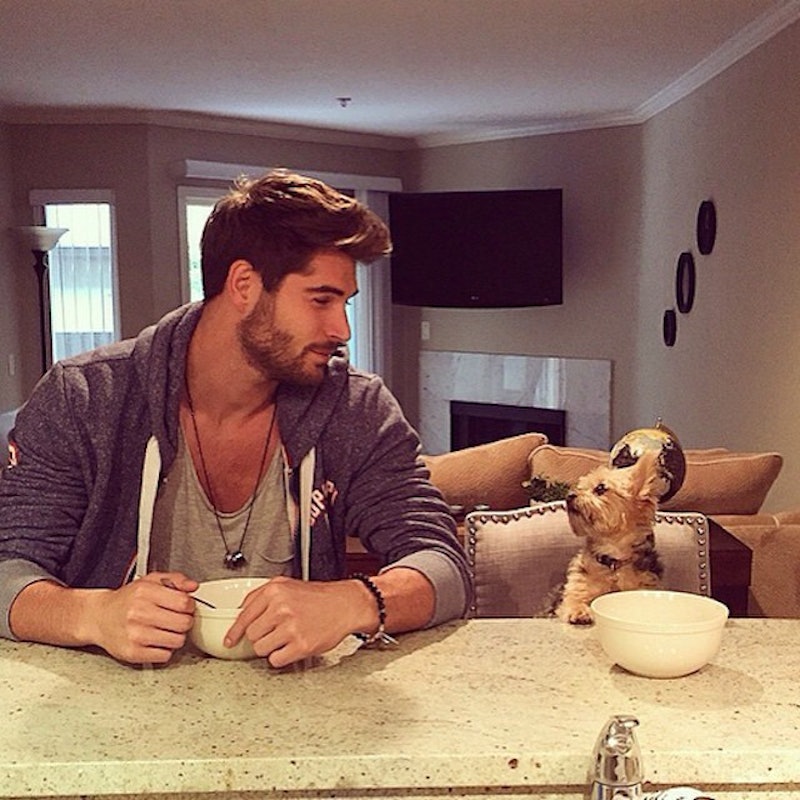 Well, it looks like the “Gorgeous Guys With Fill-in-the-Blank” trend is still going strong, because now we've got another one: @HotDudesWithDogs, the latest Instagram account featuring beautiful people posed with something else desirable — in this case, puppies, pooches, and other four-legged cuties ranging from the tiny and pocket-sized to the enormous and adorable. The account is less than a week old, but it's already garnered nearly 14,000 followers. This is perhaps unsurprising, given its subject, but still. That's a lot of followers. Now that's how you ride a trend.

Hot Dudes With Dogs was created by Elite Daily's Kaylin Pound, who's also the mastermind behind Rich Dogs of Instagram. After the rollicking success of Rich Dogs of Instagram, Pound decided to combine her love of canines with her love of attractive men — “It was only logical to bring these two heavenly creatures together,” she wrote at Elite Daily — and voila: @HotDudesWithDogs was born. I'm not totally sure where all the photos are sourced from, but a good number of them are reader submissions; if you're a) a hot guy, b) have an adorable dog, and c) would like to exploit both of these advantages for Internet fame, then go ahead and send a DM to the account. I'm sure you will be welcomed with open arms.

Like the others that have come before it, @HotDudesWithDogs is a little lacking in diversity; the guys are all conventionally attractive and generally white (there are a few POC, but not nearly enough). Given that the account is so young, it's to be hoped that it will broaden its scope a little as it ages — but at the same time, it's somewhat telling that the default setting for all these “Hot People and This Thing That I Love” accounts is White Model or Model-esque. I don't use Instagram, but if I did, that's what I'd try to do with the trend — redefine it and make it inclusive.

But maybe that's just me. @HotDudesWithDogs — and @HotDudesReading, @MenWithCoffee, and @WomenWithCoffee, for that matter — is still full of some tantalizing eye candy, and if there's one thing the Internet loves even more than attractive people, it's attractive people with an accessory that makes them even more attractive. Anyone else want to have play dates with all those winsome pooches? I guess the guys can come, too. If they must.

Catch more over at @HotDudesWithDogs.