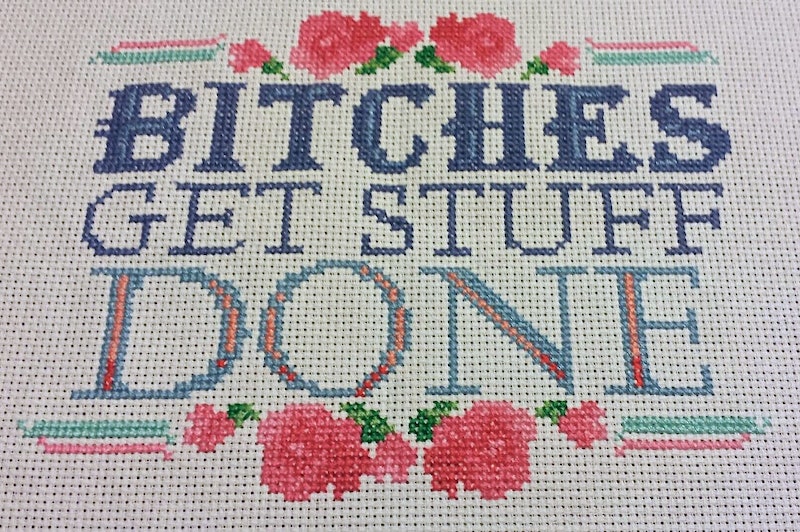 Ever been called a bitch? Yeah, me too. The first time I was ever called one was when I was only about 13 years old (by a family member no less). Though I barely knew what the word meant, I knew it wasn't something I was supposed to be. I could sense that the word bitch was code for something worse than a spoiled brat — and I feared it was something only a girl who was pushy, annoying, and unloveable could be.

As I got older, I continued to fear the b-word. Though I was editor in chief of my high school newspaper, I often found myself softening my demands of our male staff writers, in large part because I was afraid they'd call me a bitch behind my back. Every time I heard the word, I'd still get a small knot in my stomach, and remember the terrible feeling of being called a bitch as a little girl. Though I continued to be a boss as news director of my college radio station, I continued to fear the word bitch even more than the idea of being an ineffective leader.

That was, until I met my best friend Michelle. A gay woman who grew up in Miami, Michelle used the word bitch in a way I'd never heard before: as a term of endearment, and a compliment. At first, I would still get uncomfortable when she called me a bitch, and I told her so. But gradually, as we talked about the word and her use of it more, I realized what she was doing: she was taking the word back.

Slowly but surely, I began to also. While a man saying the word bitch still makes me cringe, I've learned to take back the word bitch for myself. It's been a long process, but these days, I don't much care if someone calls me a bitch behind my back: I am too busy being a boss. More importantly, I also know that I am a good person who cares about other people, and that no label can threaten that fact. These days, I smile when Michelle calls me a bitch. Because I know it means she thinks I'm a badass.

So you can imagine my interest when I found out that life coach Kali Williams was speaking at South By Southwest in Austin about how women can ditch the bitch stigma, and reclaim the word for themselves. Because I know it's anything but easy, I spoke with Williams to find out what practical steps she suggests women can take to reclaim the word — or at least stop worrying about it being used against them. Here are her tips.

1. Understand That You're Wasting Your Energy Worrying About It

"I like to use this example: In X-Men First Class, Magnito comes in, and Mystique is lifting weights, and she's made herself look like a normal human. And Magnito says, 'You know, it might come down to your life if you're spending so many resources pretending not to be who you are.' And she drops the weight and turns back into her gorgeous blue self.

I think that's a great analogy for how women are: we spend so much time worrying about people thinking we're going to be a bitch (and being a bitch has definitely been classified as a 'Really Bad Thing') that we [sometimes] don't necessarily put that effort into getting successful things done, because there's so much energy being spent elsewhere."

2. Recognize That There Is A 'Bitch Spectrum'

"Sure, there's the 'evil bitch' end of the spectrum, where you are being condescending, and rude, and you bulldoze. I'm not saying go out there and steamroll everybody and act like an asshole.

It's important to understand that there is this spectrum of bitchhood; and that if someone is calling you a bitch being for being assertive, or strong, or setting your boundaries, than that's the kind of bitch that I think needs to be a lot more acceptable for females to be. We need to not be afraid to be strong just because someone might mislabel that as being a bitch, in the 'evil' way.

3. Learn To Translate The Word In Your Mind

"I talk about the bitch stigma because it's such a cultural reference point for [what is really describing] a strong woman. And we need to just stop caring about [the threat of the word]. In our heads, when somebody calls us a bitch, what we need to hear is 'I'm a strong woman, and you're uncomfortable with that.'"

"A 'good' bitch would be someone who's standing up for themselves in a firm way. It doesn't have to be rude.

For example, when I was in my 20s, I had some roommates, and two of them decided to move out, and one wanted to stay. But I wanted to take over the lease myself (the remaining roommate was not someone I liked). He went appy — he said 'You're a bitch!'

I said, 'If being a bitch means that I'm setting boundaries for what's right for me, and not actively hurting you, then yes — a bitch I am. Confidence, assertiveness, and expecting your boundaries to be respected, would be [what I'd call] 'good' bitch behavior."

5. Practice Asserting Yourself In Low-Pressure Ways

"It's important to assert your confidence. If you tend to be sort of shy, do it in small ways.

Like, when you're ordering coffee, as opposed to being a bit timid and doing that question at the end — 'I think I'd like some coffee with cream?' — if you go in and practice saying things definitively, 'I'd like some coffee with cream, please' — the benefit you get is that when it comes time to set boundaries and be decisive in [higher stakes situations] you'll have practiced in low-pressure ways in order to build your confidence."

6. Understand The Physical Nature Of Confidence

"Amy Cuddy has an awesome Ted Talk where she talks about how body language not only affects others, but also ourselves. She talks about power poses (I've been doing the Wonder Woman power pose [hand on hips] naturally since I was about nine). So you can try to change your body language in a way that can reset your internal triggers.

So, for example, If you're not feeling confident, sitting with your knees crossed and hunched over looking at your phone in not going to contribute to you feel confident. Janine Driver, who runs the body institute in DC, also has a great tip where if you touch your chin, you're automatically seen as having more authority and being more intimidating."

"You can ritualize certain aspects of your life to help you get into a more confident headspace. For example, for me, I feel most confident when I have a pair of heels on. That's a Pavlov trigger for me, that I am in my strong power position.

More like this
Beyoncé & Madonna’s “Break My Soul” Remix Honors A Group Of Black Icons
By Stephanie Topacio Long
The Best Time To Date After A Breakup, According To Experts
By Bustle Editors
7 Women Share Their Best Orgasm Stories
By Lexi Inks
22 Movies On Netflix That Are Perfect For The Whole Family
By Bustle Editors
Get Even More From Bustle — Sign Up For The Newsletter