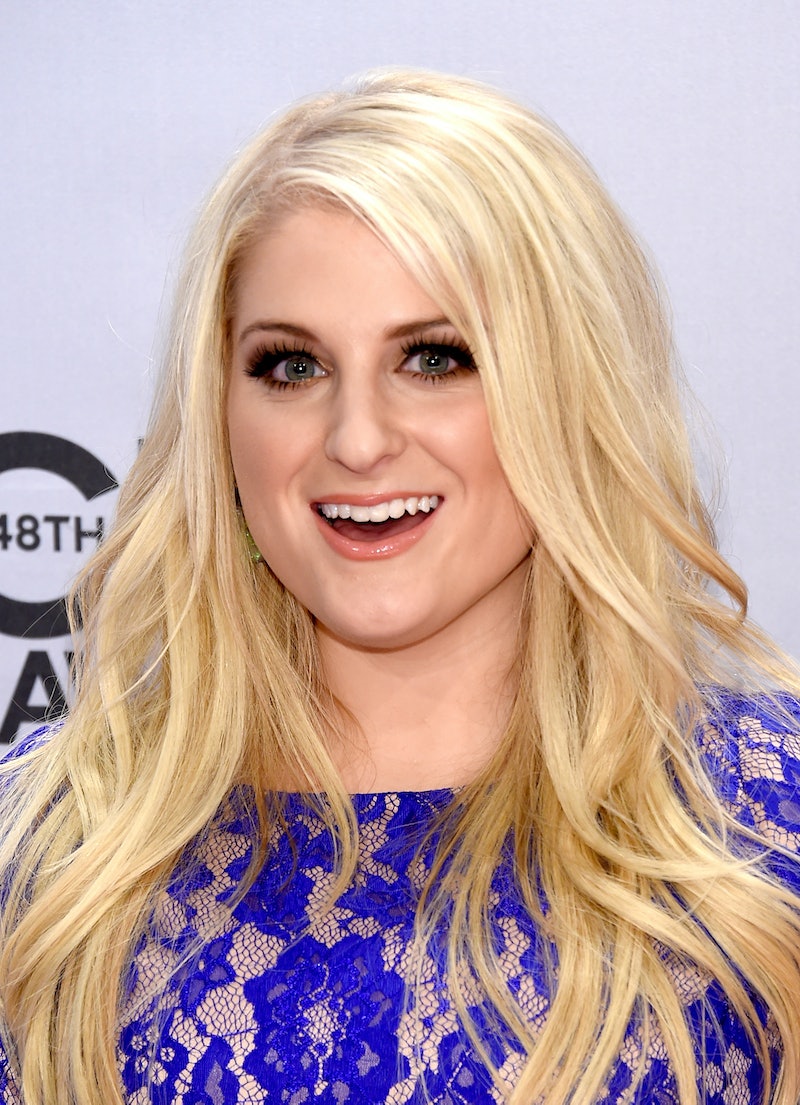 When Meghan Trainor first came onto the scene with her smash hit, "All About that Bass," the phrase "one hit wonder" was thrown around left and right. However, with the success of her follow-up single "Lips are Movin,'" and with the release of a band new music video for "Dear Future Husband," Trainor has cemented her place in the world as a bonafide pop star. Along with her knack for putting out endlessly catch earworms, she has also made a visual brand for herself in her music videos. Each one is filled with bubblegum pastel hues, vintage fashion, and bright, bold shots that place Trainor front and center. She sort of makes it impossible not to get sucked into the magic.

In "Dear Future Husband," Tranior puts suitor after suitor through the ringer. They must wine and dine her only to her liking, and she demands they put a ring on it. A string of studs fail to impress her until the right guy arrives just at the last second... with pizza no less. The pizza is by far the only saving grace of an otherwise "Yeeeeeesh"-inducing video. I think we're all a little over the narrative of, "Boy chases girl. Boy buys things for girl. Girl Settles. They live happily ever after." With the knowledge that Trainor is on the "I don't want to call myself a feminist" train, the video feels even more out-of-date.

As much as Trainor was applauded for the empowering messages within "All About that Bass," she has since put out singles and videos that send pretty mixed messages. Even in her debut single, she celebrates full-figured bodies while shaming smaller bodies. Let's take a look at Tranior's videos and the messages she is promoting, intentionally or unintentionally, and ways she can fix that.

Okay, sure, the whole "don't expect me to bake you a pie" thing is on par with where the world is headed in terms of erasing boring gender roles. However, the overall message of the song and the video is that women want superficial things — a man to buy jewelry, to be strong enough to wield a sledgehammer, and to be ordered around like a glorified pool boy. Aren't we beyond these expectations? Has Beyoncé taught Trainor nothing? The easiest way to fix this message is to remember that relationships (be it between a woman and a man, a woman and a woman, a man and a man, etc.) are partnerships. Be assertive and be powerful... but don't be shallow.

The song itself sends a pretty good message: Don't be a scrub. If you are a lying, cheating scrub, you will get caught and I WILL PUT YOU ON BLAST. I can get on board with that. However, after "All About that Bass," I was hoping that Trainor would practice what she preached and used a more diverse range of dancers and actors in her video. Sadly, that turned out not to be the case in the music video, in which Trainor is mainly the only person with a fuller figured that is featured. This isn't just a lesson that Trainor alone needs to learn; every music video should at least try to feature a broad range of people of different looks and styles.

"All About That Bass"

I know, I KNOW. This is the song in which Trainor promotes body positivity by celebrating her body and her self AS IS. However, she does a little mean when it comes to people with thinner body types. With that single line removed, the song is otherwise there to say that Trainor loves herself from the inside out, and that is always a good message. It also doesn't hurt that we see people of all ages, shapes, and genders dancing joyously together in the music video. As far as messages go, "All About That Bass" is the one in which the song and video are in the most harmony. Hopefully, Trainor will have a better eye for what she's promoting as time goes on.