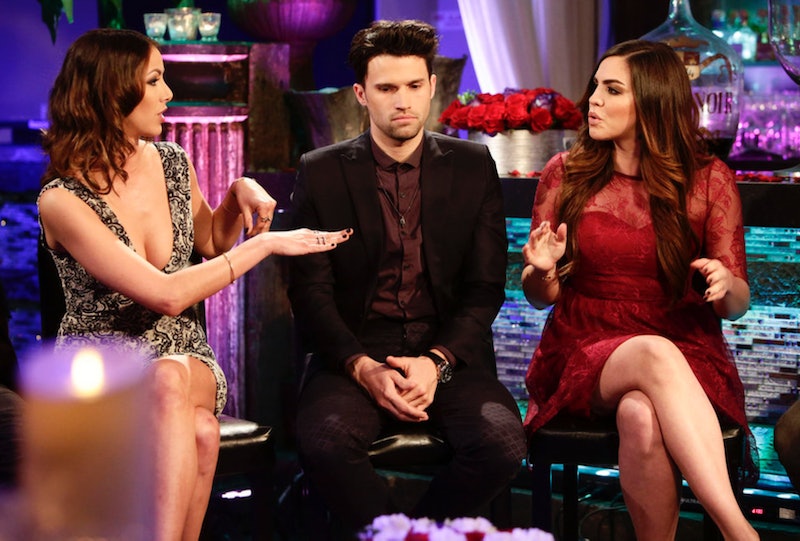 Fast-forward to Monday night's reunion special: Andy Cohen brought up The Ultimatum. Tom Schwartz acknowledged that the time limit set by his longtime girlfriend was almost up. Without missing a beat, he took Katie's hand annnnnnd...

...put a cocktail ring on her finger. He asked if she'd continue to be his girlfriend. Well, then. And so it is. At the very least, I hope he warned Katie beforehand.

What's that? You want to know if I've imagined how that conversation might go down? Funny you should ask! Here's a Katie/Tom Schwartz pre-reunion convo that I totally made up:

T: "Hey, you know they're going to ask if we're engaged yet. I don't want to propose at the reunion, because come on, but I think it'd be good TV if I pretended like I was going to do it. Is that OK? Let's at least have a little fun with this."

T: "Hey, at least I didn't do it without warning you. I learned my lesson with the ring on the string: No more proposal fake outs! No more getting your hopes up only to smash 'em into smithereens!"

K: "Let's just say we're not engaged and leave it at that. I don't want to make this a thing. I'm so sick of this being a thing."

T: "No, no! Turn that frown upside down, Bubbie. I promise I'll pop the question eventually, Bubbie."

K: "But when? You keep putting this off. I'm a patient person, but I have my limits."

K: "Fine. But you know the longer you wait, the higher my expectations are, right?"

T: [Holds up Gordo the dog] "Do you hear that Gordo? She expects a lot out of us! That's a compliment!" [Waves Gordo's paw at Katie]

K: "Don't drag Gordo into this. He had nothing to do with that ring string debacle. This is all on you, buddy."

T: "Wait, can I see your hand? I want to make sure this pinky ring fits your ring finger.

T: "Bubbieeeeee, you're the cute one!"

More like this
Twitter Is Still In Hysterics Over 'Love Island's Chaotic Heart Rate Challenge
By Frances Stewart
Twitter Can’t Move Past *That* Secret Kiss On 'Love Island'
By Frances Stewart
Bachelor Nation's Blake Horstmann Is Dating 'Love Is Blind' Star Giannina Gibelli
By Jake Viswanath and Radhika Menon
The 'Love Island' Contestants *Do* Know Who Gemma's Dad Is, After All
By Bustle UK
Get Even More From Bustle — Sign Up For The Newsletter