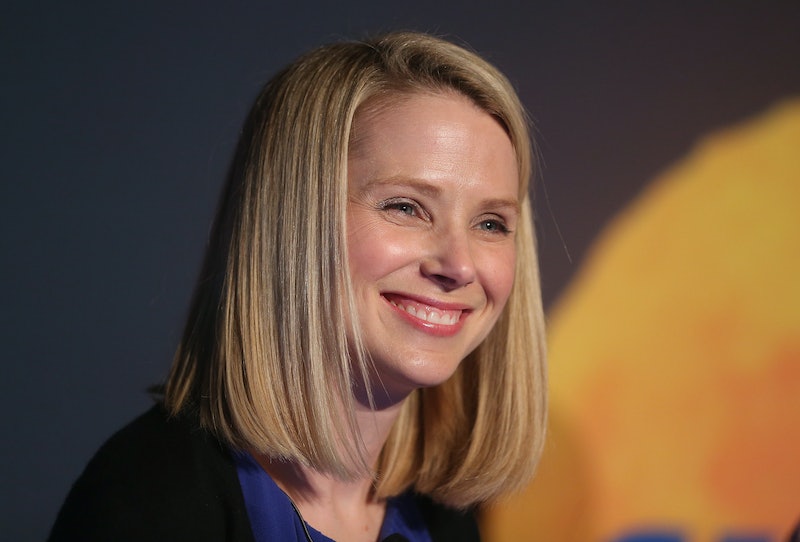 So, how tired are you of gender-based stereotypes and discrimination in big business? Given the stark lack of female corporate leadership, and the myriad ways that management environments can be hostile to women, your answer is probably "really tired," with an expletive of choice thrown in for good measure. Well, good news for anyone who's sick of the big business boys' club — new analysis from algorithmic trading platform Quantopian has found that women-led companies outperform the S&P 500 by three times, a little factoid that's sure to rankle your local men's rights activist.

The findings, expertly detailed by Fortune's Pat Wechsler, are especially promising given the steep odds that women face when it comes to securing top corporate jobs. Right now, just four percent (24 out of 500) of S&P 500 companies are led by women, a dismally low figure. Of course, we shouldn't need this kind of analysis to want to see that number change — men and women alike can flourish in corporate jobs, and bringing some balance to those numbers would be righteous enough on its own. But when you consider this new information, the outcome-driven angle becomes more apparent too.

As you can see, courtesy of billionaire philanthropist Melinda Gates, the results of the experiment are pretty clear.

Here's how it worked: Quantopian's product manager Karen Rubin simulated buying $100,000 worth of stock in companies with women CEOs from 2002 to 2014, and tracked their value from the start of their tenure to the end. Basically, she "bought" the stock when a woman stepped into the top job, and "sold" it when she left, then compared those results to the changes in the S&P 500 over the same period.

And what she found was, well, pretty awesome — the women-led companies outperformed the S&P 500 by a wide margin, with a return of 348 percent against just 122 percent. How's that for your gendered stereotypes in corporate culture? As Wechsler details, Mindy Grossman of the Home Shopping Network and Debra Cafaro of Ventas proved to be standouts. Former Jack In The Box CEO Linda Lang also rated highly — I guess marketing junk food to stoners really does pay off?

In any event, this is some handy information to fall back on the next time you hear somebody spouting off about women not thriving in corporate leadership. The fact is, when given the chance over the last decade-plus, on average their companies haven't just competed, they've soared.

Hopefully we'll reach a time someday when this gap is erased entirely, so we can transition from decrying corporate sexism to decrying, well, all the other things that make many major companies problematic. It sure feels long past due, doesn't it?