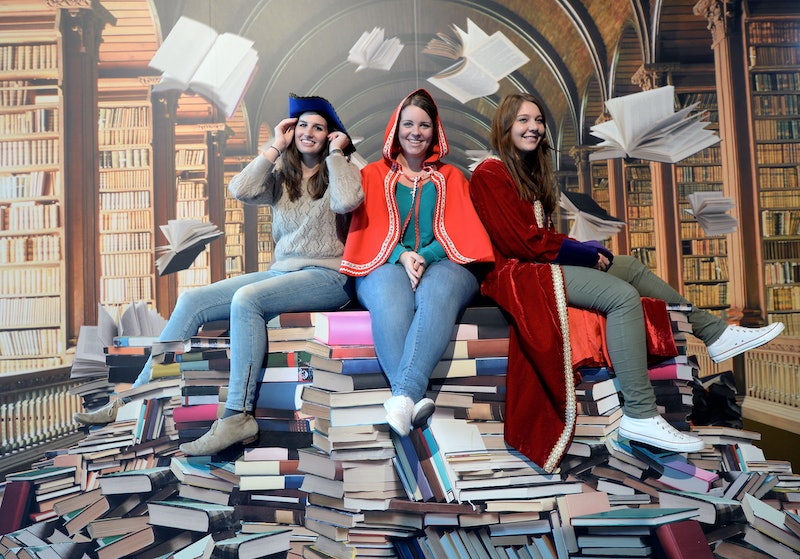 If you grew up as a literature-loving young lady, there's no doubt that you also had a bookshelf full of novels with characters you felt were as near and dear as any flesh and blood friend out there in the so-called "real world." Did you ever pretend that Ramona Quimby was your own precocious little sister? Or ponder which member of the Baby-sitters Club would be your best pal in real life? Perhaps you dreamed about somehow folding yourself in between the Pevensie sisters, giving The Chronicles of Narnia a fifth kid to honor? Or imagined that you lived up in that nasty old attic alongside Sara Crewe?

Children's literature has always been full of gals we wanted to be real friends with — and plenty who still empower us even to this day — but not all of them might be able to pass a crucial coolness test. Sure, we wanted to be friends with them back then, but who among kid lit's biggest heroines do we still want to hang around with now that we've grown up?

Given such a deep pool of awesome leading ladies from our childhood to pick from, who is actually the coolest of the cool? Whose smarts, spirits, and loyalty mark her as a timelessly cool lit lady? We think we just might have found the best of the bunch, at least as it applies to all the characters you loved to read about in your younger years.

The club's official secretary, Mary Anne has always been cast as the "shy" and "quiet" one, and her more intellectual pursuits and reserved nature serve as a nice counterpoint to some of the more outsized BSC personalities. Still, Mary Anne has some pretty cool stuff going for her — she's a good listener, she's got great handwriting, and she's a super-loyal friend.

Ramona Quimby's bigger, badder, older sister Beatrice Anne "Beezus" Quimby has kind of a thankless job, essentially playing second fiddle to her wacky baby sister. But Beezus has style, and she's also super-smart with some appropriate sass. Who wouldn't want a cooler older sister like that?

Yes, Kristy is bossy and loud and sometimes a little bit abrasive, but she's also awesome at generating ideas (great ideas, even!), and her head for business and heart for sports are very cool. Her trademark laidback style (jeans, sneakers, tees) might not scream fashion plate, but you know what is cool? That she's always herself.

The late-arriving fifth member of the BSC is the prototypical California girl — blonde, relaxed, super-into health food, and way concerned with the environment. She's a major breath of fresh air into staid Stoneybrook, Conn., but her sudden move back to California does lower her stock just a bit.

On the surface, the youngest (by four minutes!) Wakefield twin is extremely cool. She's pretty, popular, head of the cheerleaders, smart enough to bring a sorority to her high school, and constantly surrounded by admirers. But Jess is also — how do we put this delicately? — kind of catty and mean. That's so not cool.

The diabetic treasurer of the kid-watching club earns major cool points for her wardrobe alone. Stacey is the resident fashionista of the group, and her sparkling and on-trend outfits are enough to rack up a bevy of cool points. But Stacey also has another very cool side to her — a mathematical mind and a logical brain. How many sartorial superstars join the Mathletes, we ask you? Only the cool ones.

Like her slightly lower-scoring sister, Liz Wakefield has the looks, the popularity, and the beloved friend group to push her into "very cool" territory, but while Jess loses out because of her bad attitude, her older twin has the precise kind of positivity cool kids need. Liz is a nice gal, a loyal pal, and a surprisingly mature teenager. Even better? She's career-oriented and exceptionally driven when it comes to her journalistic dreams.

The most creative and expressive member of the BSC, Claudia is also — by far! — its coolest leading lady. She paints! She draws! She wears crazy outfits! She loves junk food! She has an aunt named Peaches.

Collectively, the Pevensie children are really cool (they go through a wardrobe into a magical world that they are meant to rule, after all), but Susan is still not nearly as cool as her younger sister, Lucy (more on her later). Susan is smart, good with her siblings, and aces with a bow and arrow. She even becomes queen of Narnia, where she is known as — wait for it — Susan the Gentle. Later, though, Susan the Gentle becomes Susan the Self-Involved, leaving Narnia for the "real world." (Bad choice.)

Switzerland's favorite mountain girl is doubly cool, because she is cool both on the mountain (she's aces at goat-herding) and off her native hillside (she serves as a loyal and sweet companion to Clara, the resident "sick girl" of Frankfurt). Heidi is comfortable out in nature and learning to read and write alongside the already book-smart Clara. She's loyal to everyone she loves, and she even helps Clara learn how to walk. She's a total (adorably pigtailed) package.

15. Julie/Miyax, Julie of the Wolves

Julie/Miyax from Jean Craighead George's beloved classic is a survivor who possesses the kind of life skills most people don't even have when they grow up into adults. Cool bonus? She's a big animal person, and the furry ones just love her.

The titular princess of Frances Hodgson Burnett's heartbreaker, Sara never relents on her belief that she's, well, kind of princess. Sure, she has just about everything stripped from her, but she maintains such a true spirit and such a lively imagination throughout even the worst situations that she's impossible not to root for — and she's definitely the coolest girl at Miss Minchin's boarding school for young ladies.

The Weasley family is, by and large, the coolest (entirely living) family in the Harry Potter universe, and Ginny happily and handily upholds the family honor — especially considering she's not just the only girl in the family, but the only one born to the family line in seven generations. She's super-special, really, but she never acts like she's above anyone or anything. She's a team player, a solid sister, and a loyal friend. She's not the coolest Weasley (hey, Fred and George), but she's up there.

The star of Lewis Carroll's enduring classic, Alice might be the kind of person that things happen to at the start of the book, but she grows into a fierce fighter with an excellent sense of humor (and literary importance) by the story's end.

Roald Dahl's Matilda is, like so many other entries on the list, a survivor. Saddled with an unforgiving and uninteresting family, Matilda makes the best of what she's got — which just so happens to be a big brain and lots of magical powers. Matilda gets things done, and gets them done for the better, and that's a pretty cool way to go through life.

No, Harriet's propensity for spying on people isn't exactly cool, but her eye for a good story and her dedication to improving her craft is super-cool. Harriet might be a bit too honest with her observations, but she's a very good sport when it comes to learning important lessons and applying them to the rest of her life. Too cool.

9. Margaret Simon, Are You There God? It’s Me, Margaret.

Like Harriet, Margaret doesn't always make the right choices, but she's excellent at learning from past problems and using them to right her current state. A searcher, a thinker, and a wonderer, Margaret isn't afraid to tackle the big questions, even in the most personal of ways.

Sure, Lucy's older sister Susan was known as "Susan the Gentle" during her Narnia-ruling years, but Lucy was known as "Lucy the Valiant," unquestionably a cooler title. Little Lucy isn't just brave, she's also extremely faithful, and her unwavering belief in Narnia and its inhabitants holds C.S. Lewis's series together. Oh, and just for extra cool points, she's also an awesome warrior.

Did Anne of Green Gables make you want to run away to Prince Edward Island, be your own (quirky) person, and become a teacher? Of course she did.

Beverly Cleary's infuriating Ramona may be a whole lot of trouble, but she's also a bundle of joy, wild imagination, and pure fun. No, you might not want to be her big sister, but you probably wanted to be like the uninhibited Ramona at least once in your life.

Eloise is automatically very cool because she lives the kind of life that most of us grow up wishing for — and then never grow out of. She lives at the Plaza Hotel with her pug and her turtle. If you met someone today who had that lifestyle, you'd automatically think they were the coolest person you'd ever met, and Eloise did it as a kid! She did, also, cause a lot of trouble and destruction wherever she went, but she's got such a sweet spirit, it's sort of hard to hold it against her.

Wild, fun, wild, really fun, crazy, imaginative, nutty old Pippi is the heroine of her own life — and her blasé attitude towards authority and big love for animals mark her as cool even today, despite the fact that she was invented in the early part of the twentieth century.

Little half-pint might have an edge here — after all, she did write all of her own stories — but Laura's enduring charm doesn't have much to do with her trying to appear "cool," even the 19th century American settler idea of "cool," she was just Laura. She wasn't "pretty" like her sister Mary or obedient like baby sister Carrie, she was a bit of a hell-raiser and wildly curious. Nothing is cooler than being yourself.

It's hard to deny just how cool Hermione actually is, not even just in the context of the Harry Potter universe. Think of it this way: If Hermione stepped out of the pages of J.K. Rowling's beloved series and became a real girl, wouldn't you want to be friends with her? Of course you would! She's smart, funny, insanely talented at magic, a true friend, a good dancer, a cat lover, and she's got a way with the opposite sex. She's a charmer and the coolest girl in any (and every) story she appears in — and that's not just due to her prodigious magical powers.