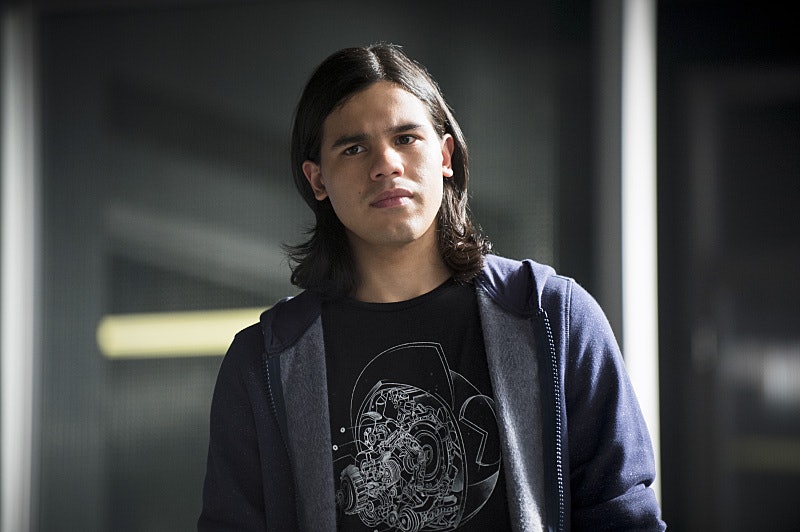 After a hiatus that seemed to last forever, The Flash returned Tuesday night with "Out Of Time." For most of the hour, it was a pretty standard episode. Barry and Iris continued to dance around their feelings for each other, the team hunted down a newly introduced metahuman, Harrison Wells was very suspicious, and Cisco made some great jokes. Then in the episode's final few moments, a million explosive things happened at once, with one horrible scene standing out above the rest. Harrison Wells killed Cisco Ramon just after revealing himself to be Reverse-Flash, in one of the series' most heartbreaking scenes.

I knew Cisco uncovering Wells' big secret couldn't end well, but I never thought The Flash would kill off one of its best characters. But that appears to be what happened — well, sort of. By recreating the night Reverse-Flash came to S.T.A.R. Labs, Cisco figured it all out, just in time for Wells to walk in (yes, he walked in front of Cisco), confirm his identity as not just any Reverse-Flash, but DC Comics staple Eobard Thawne, and give a heart-wrenching speech about Cisco being the closest thing he's ever had to a son. Tears were flowing down Cisco's face as he feebly offered to help Wells travel back to his time, after being trapped in the present for 50 years, but it wasn't enough.

Wells menacingly shook his hand so fast it appeared to be vibrating, and as my own face began to match Cisco's, the evil scientist plunged his hand through Cisco's chest, killing him. But before you curl into a corner and cry or give up on the rest of this season, I have some good news. At the very end of the episode, Barry time traveled.

In an attempt to prevent a tidal wave from the Weather Wizard, Barry ran faster than he ever had, traveling back in time to a few days earlier. That means he can save Cisco, as Barry is in the past, when Cisco was still safe and sound. And since photos from next week's episode show a very alive Cisco, rest assured that as always, Barry will save the day — or technically, he already has.