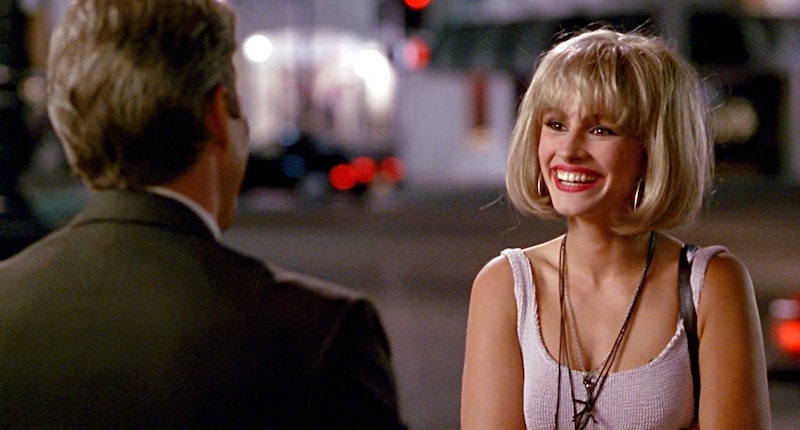 With a title like Pretty Woman, I think it's fair to say that the iconic film wasn't the most groundbreaking when it came to its portrayal of women. As the ultimate rom-com, Pretty Woman, turns 25 years old on March 23, people can still debate whether or not the story of prostitute Vivian and businessman Edward is a modern and feminist retelling of a fairytale. (This writer's opinion: Modern? Yes. Feminist? Eh, no.) But what did film critics back in 1990 have to say about Julia Roberts's character's profession and — more importantly — did they slut-shame her for it?

Now usually when people talk about slut-shaming, they aren't discussing an actual female sex worker. Vivian accuses Richard Gere's Edward of not treating her well (and Jason Alexander's Phillip definitely doesn't), but how did the critics treat Vivian back in 1990? And for that matter, how did they treat Roberts herself? In the media, men and women actors are intertwined with the characters they portray, but female actors are typically targeted more if they act promiscuous. (A woman who portrays a "slut" must be a "slut," right? Yuck.)

Well, the reviewers of 1990 made me pretty proud since if they took any issue with Pretty Woman, it was mostly directed at the film's plot holes. (I know, I know — it's blasphemy to say such things about a classic, but c'mon, we should all be able to acknowledge that the film's plot isn't airtight.) And if the critics did target Roberts's — or Gere's — performances, it usually focused on their acting and not the sexuality portrayed. So, let's go 25 years in time and check out what some of the most notable critics originally had to say about Pretty Woman.

"[The prostitute] is played by Julia Roberts ... as a woman who is as smart as she is attractive, which makes her very smart. Like many prostitutes, she is able to perform the mental trick of standing outside of what she does, of detaching herself and believing that her real self is not involved. That's what she does. ... [Edward] offers her money to spend one week with him, she accepts, he buys her clothes, they have sex and of course (this being the movies) they fall in love."

Roger Ebert, the man behind the Thumbs Up gold standard of movies, gave Pretty Woman a good review in the Chicago Sun-Times. I'm completely with him that the reason the pair fell in love was because it's a movie. (And as Ebert astutely observed, Edward had only broken up with his girlfriend a half an hour previously.) My main concern with Ebert's review is how many prostitutes did he know to have written the line "Like many prostitutes ... "? Sounds like he was basing that generalization on the entertainment industry's interpretation of prostitutes.

"With its tough-hooker heroine, it can work as a feminist version of an upscale princess fantasy. Pretty Woman pretends to be about how love transcends money, but, like Paula Abdul’s "The Way That You Love Me" video, the film is really obsessed with status symbols. It’s saying Roberts’ character becomes a better person when she lands a rich guy and learns to cry at the opera."

Entertainment Weekly reviewer Owen Gleiberman was not very smitten with the film, giving it a D rating. He was dismissive of the character Vivian — but it wasn't because he thought she was a slut for being a prostitute. He didn't buy Roberts's acting, or the plot for that matter. Yet, Gleiberman had the foresight to know the movie would become a classic, writing, "And yet the movie may catch on."

"Nothing works, except perhaps the sight of Julia Roberts' lean, well-tempered midsection and her roughly eight yards of legs that, in this frail comedy, are worked until they're almost a story point of their own. ... "Pretty Woman's" shorthand Cinderella message is: Wear the right clothes, know what every hooker knows and the world is yours. Even "Working Girls' " [sic] delirious wish-fulfillment worked a little harder than that. Her boss' clothes may have been Melanie Griffith's character's entry-card and she may have had that bod for sex, but those months of night school were her ace in the hole."

Isn't it fascinating that this female reviewer — Sheila Benson of the Los Angeles Times — was more critical of Roberts than most of the men reviewers? I don't think Benson was technically slut-shaming Vivian (she was criticizing the film for not having much substance), but she was condemning Vivian for getting by on her appearance and prostitution skills — and nothing more. Sure, Vivian may not have had the education that Melanie Griffith's Tess McGill had in Working Girl, but there was an allure to Roberts's Vivian that went farther than just her body. At least Benson did acknowledge — even in a very snarky way — what an amazing body it is. And fun fact: Griffith and Roberts were both nominated for Best Actress at the Academy Awards for their respective roles.

"Edward spots a gorgeous hooker named Vivian and asks her for directions, nothing more. ... And the hooker is played by Julia Roberts, who is so enchantingly beautiful, so funny, so natural and such an absolute delight that it is hard to hold anything against the movie."

The crème de la crème of journalism, The New York Times, was actually quite complimentary of Roberts in her role of Vivian. The worst thing that reviewer Janet Maslin wrote was that she kept using the word "hooker," which is a bit harsher word than prostitute. But, to be fair, that was Vivian's profession. Maslin also condemned the fact that Vivian took issue with Edward treating her like a prostitute when she wrote, "Every now and then, just to add to the film's confusion on this basic issue, Vivian picks a fight with Edward and accuses him of treating her like a prostitute. But Edward can hardly be blamed for having a memory that goes back longer than three days." Touché, Maslin. Touché.

"Years from now, Hollywood historians may try to pinpoint the precise moment when Julia Roberts became a star. ... It's here, about fifteen minutes into this silly-shallow comedy, when she's soaking in a tub in a posh hotel, radio earphones on, harmonizing off-key with Prince and oblivious of how she looks to Richard Gere, who's watching her and losing his heart like the rest of us. ... Edward soon learns to care, and Vivian reforms, teaching her tart pals by example. The moral seems to be that shacking up is stupid; hold out for a ring and community property. ... You're likely to have a fun night at the movies with Pretty Woman, but you'll hate yourself in the morning."

Peter Travers of Rolling Stone decided to focus on the star power of Roberts rather than what her character did for a living. Of course, he was absolutely right since the world fell in love with Roberts (and is still loving her). But Travers wasn't completely innocent in his review. His use of the words "tart pals" made me raise an eyebrow and his last line — though very clever — insinuates that people hate themselves for sleeping with prostitutes. Hey there, buddy — you just made it very clear that you wouldn't hate yourself for sleeping with Roberts no matter her profession.