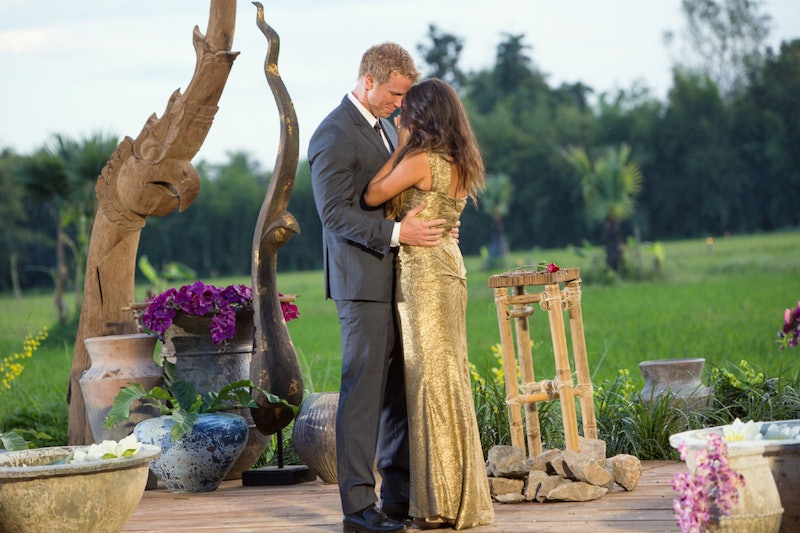 One of the best parts of any Bachelor finale is seeing which dresses the contestants are given to wear to their possible proposal. It's the only time during the show that an outfit is provided for them, and, as such, it's usually a lot nicer than the average rose ceremony attire. With 19 seasons of extravagant gowns under its belt, what better way to celebrate the show's stunning fashion than by ranking The Bachelor finale dresses?

Usually, the women on the show are allowed to wear all their own clothing for dates, rose ceremonies, pool parties, etc. But for the final episode, the show provides the final two contestants with glamorous designer dresses, instead. In recent years, producers have even used the gowns to tell a story, like during Sean Lowe's finale when Lindsay Yenter wore a silver dress and was runner-up, while Catherine Giudici wore a gold dress, and won the show. OK, so that was a coincidence. But maybe it was also a psychic at work.

There have been a lot of lovely dresses over the past 19 seasons, each emblematic of the changing fashions as the years have gone by. Here's my definitive ranking of the best of the finale outfits from each of the winning ladies.

This burgundy crochet dress feels very 2002, which is when this Season 1 gown hit the screens.

Season 4 marked the first of many times that the finale dress was a basic black gown. Gardinier's dress is certainly pretty, but it's also fairly average. (Though you gotta love those 2003-style spaghetti straps.)

Bowlin kept things boho-chic in Season 5 with this creme lace dress (and no shoes)!

Bischoff's navy gown in Season 19 was certainly stunning, but felt a little out of place for her barnyard proposal.

Although Robertson's Season 16 Alberto Makali dress is one of my favorite of the black Bachelor gowns, the leather gloves make this look a little over-the-top.

Brice's plunging Season 7 dress was basic, but had just the right amount of detail to make it shine on screen.

For The Bachelor's 10th season, the show branched out a little and went for some color with this soft mint gown.

Season 3 took place in 2003, which makes total sense when you look at this chiffon slip dress with tiny straps. It's a blast from the past, but also just a really pretty gown. I especially like the subtle branch pattern around the waist.

For Season 15, Maynard was pretty in pink, and the dress suited her complexion perfectly.

This emerald dress literally shone during Stone's Season 8 finale episode. It was a definite statement gown.

Season 18's Nikki Ferrell went bold with this blue dress and a thigh high slit. She didn't win a ring, but she looked gorgeous.

For Season 17, The Bachelor went big with this shimmering golden gown. I love when the show uses color for their finale dresses because they pop so much more.

Season 6 put Delgado in this slinky black gown. She wore the number really well, keeping it classy and sexy at the same time.

In Season 14, Girardi expressed her desire to have a dress inspired by the ocean and the sky. Of all the finale dresses, I think this flowing blue gown fits the proposal scenery the best. She looks like a true ocean princess.

I love how unique this Season 2 dress is. While she looks casual, she also looks elegant, and the red piping makes the black dress pop.

She may not have kept Jason Mesnick's heart, but Rycroft's Season 13 Grecian gown was stunning. That color on her tanned skin, and the silhouette, were so flattering. So, all other finale drama aside, at least Rycroft had the winning gown.