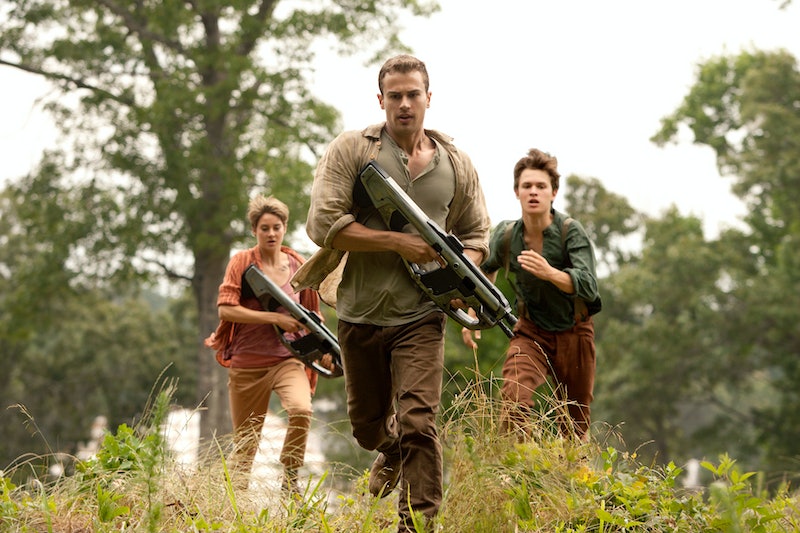 The Divergent series has a cult following thanks to author Veronica Roth's impressive dystopian world, and as the books transformed from page to movie screens around the world, they have picked up even more loyal fans. Like with The Hunger Games, the series has a central female heroine, Tris Prior, and her relationships with her family and her boyfriend are vital to her story. In both the first film adaptation and its sequel, Insurgent, those relationships are some of the only things that stayed true to the novel. The main ideas are the same in the adaptations, but some parts — including the entire ending of Insurgent — are changed to make the story more Hollywood-friendly and exciting. So, what is different in the Insurgent movie from the book? A whole lot, but this isn't necessarily all bad news since many additions and deletions were enhancements.

Many Characters Were Cut Or Had Decreased Roles

Susan Black, a girl from Abnegation who has a relationship with Caleb (Ansel Elgort), is not in the movie at all. Marlene (Suki Waterhouse) is only seen a few times onscreen — her death happens, but no funeral — and they do not show her relationship with Uriah (Keiynan Lonsdale) at all. Uriah is only seen a few times as well, and Lynn (Rosa Salazar) and Hector (Emjay Anthony) also have very minor roles. Lastly, Lynn doesn't die in the movie (at least not yet) and characters like Will's sister Cara and Edward aren't seen at all.

Jeanine's Role Is Bigger (Again) In The Film

Like in the first Divergent movie, Jeanine (Kate Winslet) was given a much bigger role. In Insurgent, she finds a mysterious box in Tris' parents home and sets up a complex machine to test Divergents through five different simulations. After all the simulations are passed, the box will unlock, which Tris is able to do on her own after Jeanine thinks she is dead. In the book, the video message comes from Four and Caleb finding it and playing it across the computer system, and Jeanine just does some testing on Tris before having her killed. In both the novel and film, Peter saves Tris, and both also have Jeanine dying — in the book, by Tori (Maggie Q), and in the movie by Evelyn (Naomi Watts).

In the book, Tris overhears Four and Evelyn's first conversation about making Dauntless join the Factionless, but in the movie, that scene happens over an awkward dinner with Caleb. Also, Marcus (Ray Stevenson) has a strong relationship with Amity's Johanna (Octavia Spencer) and he tries to convince Tris that her parents died to save information that Jeanine stole, so everyone works together to get it back. That ends up being information that Four and Caleb find and they broadcast to everyone at the end of the book. In the movie, Marcus is barely there.

The book has Four, Tori, and Harrison (who is not in the movie) as Dauntless leaders who put Eric (Jai Courtney) on trial and ultimately kill him. In the movie, there is no leadership elected and Four shoots Eric in the head after Eric tries to kill Tris and bring her to Jeanine. In both the book and movie, Tris turns herself in to Jeanine without Four knowing, but the movie does not have Four agreeing to destroy the Erudite and form a new government like he does in the novel.

For a more in-depth, spoiler-filled look, here's how the ending of Insurgent is different from the book. A Cliff's Notes version is that Jeanine's entire plan wasn't in the book and Tori kills her before the video message is even broadcast. In the movie, Tris hooks herself up to Jeanine's crazy machine to complete a final simulation — where she has to be calm and not fight herself; in the book, she has a simulation where she has to shoot herself — and then unlocks a message about there being life outside of the wall around the factions. The setup for the third book, Allegiant, was having a factionless government led by Evelyn, but in the movie version, everyone seems happy to get out into the world and see what's out there, not worrying about government or factions just yet. It will be interesting to see what happens in the next movie.