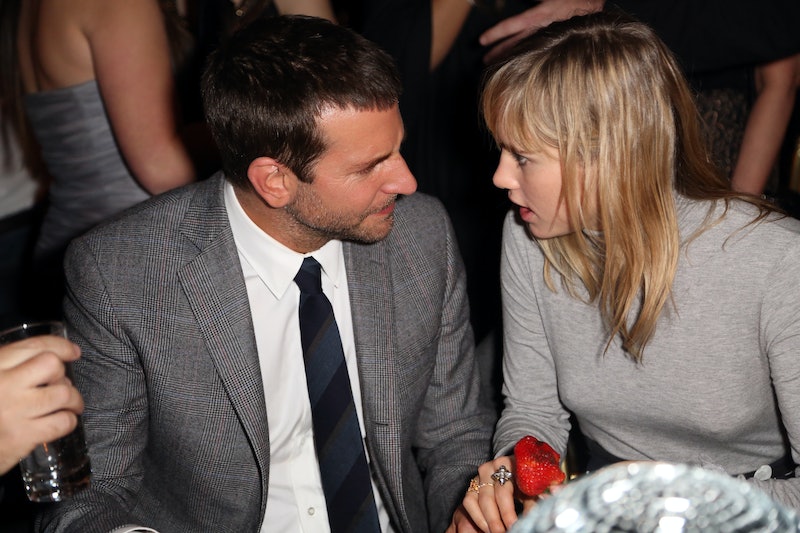 Another longterm celebrity couple has called it quits. Bradley Cooper has split from Sookie Waterhouse, his girlfriend of two years. According to Waterhouse's interview with Rollercoaster, Waterhouse and Cooper met in February of 2013 at the Elle Style Awards. He asked her to go to a club, and the rest is history — which means, unfortunately, that it's over.

(Update: According to an E! News report from Friday, March 20, a source explained the couple's split saying, "They remain friends but they both want different things right now." The source added that Cooper is ready to start a family and Waterhouse is not. "She loves Bradley and he loves her but she's so young and wants to concentrate on her acting career before becoming a mom.")

Not that the press was aware of it, of course: According to People Magazine, the couple actually separated in January, but remained good friends post-split, which explains why Cooper took Waterhouse as his date to the Oscars in February, despite "Cooperhouse" ending their romance a month or so earlier.

Why did the couple call things off? As Waterhouse and Cooper haven't commented on the reason behind their breakup, any reason right now is pure speculation. However, there is one report that suggests a reason behind the breakup, which comes from December of 2014 — just a month or so prior to the couple's split. UK's edition of Yahoo! Celebrity reported that the formerly hot and heavy couple were on the rocks because of Waterhouse's love of partying. The 23-year-old model allegedly had no intention of settling down, and liked the freedom that came along with her often long-distance relationship with Cooper, while the American Sniper actor had intentions of starting a family.

Ultimately, no matter what caused this split, it seems that Cooper and Waterhouse are still on very good terms with one another. Not a lot of people can be pals with their ex, but it's good to see that these two are making it work so that they can still have one another in their lives.

More like this
Kanye West Has The Most Kanye Reaction To Kim Kardashian & Pete Davidson's Split
By Jake Viswanath
Khloé Kardashian Is Reportedly Dating A Private Equity Investor She Met Through Kim
By Jordyn Tilchen
Fans Are Convinced That 'Love Island's Gemma & Luca Have Secretly Split
By Frances Stewart
Who Is Camila Cabello Dating? She's Getting Cozy With Lox Club CEO Austin Kevitch
By Radhika Menon
Get Even More From Bustle — Sign Up For The Newsletter