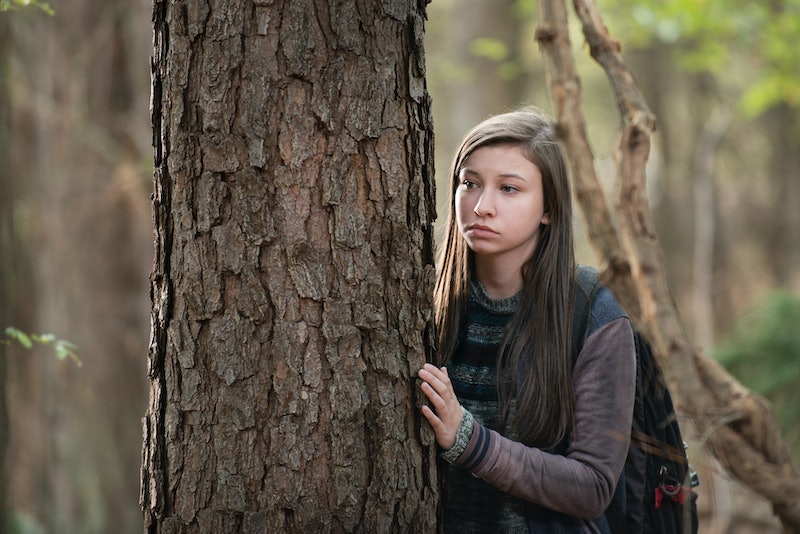 She may be one of the quieter mysteries, but I'm fascinated by the Alexandria Safe-Zone's Enid on The Walking Dead right now. Who is this child? I love that Carl has recognized a kindred spirit and gravitated towards her, rather than the boys who have been playing video games while he's basically been living in one. Her constant need to escape safety and chill in the woods strikes me as very Katniss Everdeen, and I am not mad about it. She's also interesting because she's not in the Walking Dead comic book series, while most of the other Alexandria Safe-Zone residents are recognizable characters to comic fans. Who is she?

Ernie Padaon at Fansided suggested that Enid is taking on the role that Sophia did in the comics at the Alexandria Safe-Zone. Andrew Sims at Hypable floated this theory as well. It makes sense. At this point in the comics, Sophia is still alive and becomes Carl's girlfriend — well, in a sense. They're younger in the books than they are on the show. A Hypable commenter pointed out that there are several girls in the comics' Alexandria Safe-Zone, so I would posit that she could be an amalgamation of those girls as well. However, Carl's relationship with Sophia is the strongest.

As many fans know, the AMC series sort of switched Sophia's death with Carol's. Thank goodness, because Carol "Scarol" Peletier is one of the best characters on this show right now. This is interesting on a larger scale as well. Just by switching the deaths of these two characters, so much changes! Carl gets close to a different girl, one that he doesn't know as well and could get him into trouble. Carol, on the other hand, has instantly recognized Jessie's situation and alerted Rick to the threat. Had she not been there and had that backstory, Rick's jealously could have stayed unfounded for ages.

I think the way we'll know for sure that Enid is "the new Sophia" is if she draws the attention of Glenn and Maggie. In the comics, Sophia is taken in by the couple and becomes distraught when Glenn is brutally killed. Sophia and Carl "break up" soon after that incident. Again, it's more like puppy love. Sophia is also known to repress memories, which makes sense considering her traumatic history. At this point in the series, we've only seen Enid with relation to Carl, and he's not one to pal around with Glenn and Maggie. Plus, I doubt Glenn will be willing to take on any daughter-figures after losing Noah last week. (Side note: Have revolving doors been making anyone else queasy lately?) Maggie also has her hands full, now that she's overheard Father Gabriel's warning to Deanna Monroe.

Personally, I think there is more to Enid than that. She doesn't seem to want to forget, or she would stay within the walls of Alexandria. However, she isn't into sharing with Carl either. In the sneak peek for Sunday's episode, she tells him that what happened to her doesn't matter, while picking away with her mother's knife. That's a theme that started in this series with Beth at Grady Memorial Hospital. Does any of this matter? Are they all just going to die young anyway?

I still think that Enid's family were the folks that Deanna exiled, and that's why she rebels and repels against the wall. Also, that knife could be a clue. Were Enid and her mother part of the group that's been carving Ws on walkers? Whether she's a stand-in for the late Sophia or something much more dangerous, her presence on The Walking Dead is an excellent addition.