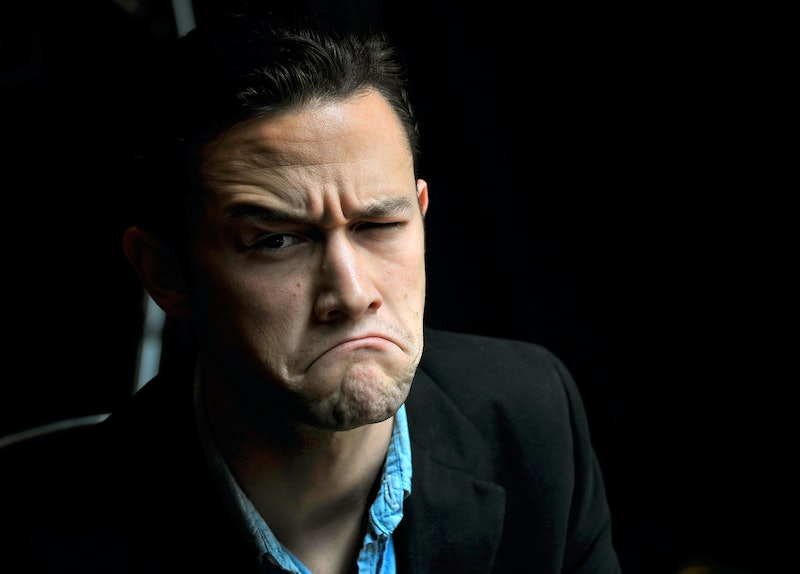 Proving he's forever a perfect man, it was recently announced that Joseph Gordon-Levitt will star in a Fraggle Rock live-action movie, and I'm super excited... I think. That is, I always love me some JGL, but it's been FOREVER since I last tuned into Fraggle Rock (considering that I am a full grown adult and it's, you know, 2015). So I took to the Internet for a definition of what exactly IS a Fraggle. Luckily one of their kind, Uncle Traveling Matt, sums up the Fraggles accordingly in the first episode:

Fraggles are a noble race - fearless, dignified, and intellectual. They represent the very pinnacle of civilization and culture. A Fraggle is, most assuredly, the best of all possible creatures. Music is the greatest of the Fraggles’ art forms, but Fraggles also possess uncanny curiosity and great athletic ability. Fraggles naturally have physical prowess and a dance-like grace.

Truthfully, it's debatable that Gordon-Levitt will take on a Fraggle role himself. He suffers from the unfortunate handicap that is not being born with skin made of felt. So it's more likely he'll play the part of Doc, the wacky inventor and sole human in the midst of the muppets misadventures. But, based on Traveling's Matt's description, I think he'd make a good Fraggle. Here's why...

1. Fraggles are fearless. So is my adorable raven-haired imaginary boyfriend.

He's never afraid to try on a new challenge, whether it's an indie flick, a blockbuster, directing, producing, putting together a multimedia variety show for the new generation, etc. He's the kind of man that slices his arm open after crashing through the rear window of a taxi and is like, "We need to be recording this!" Not a joke, guys.

2. Fraggles are dignified. So is this classy gentleman.

Not in an uppity way at all, he's a bit more laid back than that. But he has super good manners and wears the hell out of suit. You go and politely own Hollywood, babe. It's all yours.

3. Fraggles are intellectuals. So is this stunning specimen with the sexy brain.

No joke, Gordon-Levitt attended Columbia University, no big deal or anything. Also he speaks French. Oh god, does he speak French.

4. Fraggles represent the very pinnacle of civilization and culture. So does this precious creation with the heart-melting smile.

All of my lovers, past, present, and future, are held up to the standards set by this glorious guy. It's really just unfair.

5. Music is the greatest of Fraggles' art forms. This most wondrous being has mastered every art form, but music is definitely up there.

He once did a Nirvana cover and it was so good it sent me into heaving sobs.

6. Fraggles possess uncanny curiosity. So does this God among mortals and destroyer of worlds.

Every week he asks his loyal followers/peasants on his site, HitRECord, different questions about life, love, their thoughts on the world, and whether they have anything to contribute to his grand collaborative efforts to bring together the best creative forces of our generation.

So you know. That.

7. Fraggles have great athletic ability. This magnificent beast can do backflips like a gymnast.

8. Fraggles have physical prowess. Even though he's generally better known for being a sensual swizzle stick, he still managed to get extra fit, because he can do no wrong.

I still prefer skeletal Gordon-Levitt, but it's good that he has Channing Tatum potential.

9. Fraggles have a natural dance-like grace. So does this boy wonder, who makes Fred Astaire look like a rogue amateur.

Tap-dancing his way into my heart.

10. Fraggles are the best of all possible creatures. Besides this incredible man.

So all that, and they have similar hair.