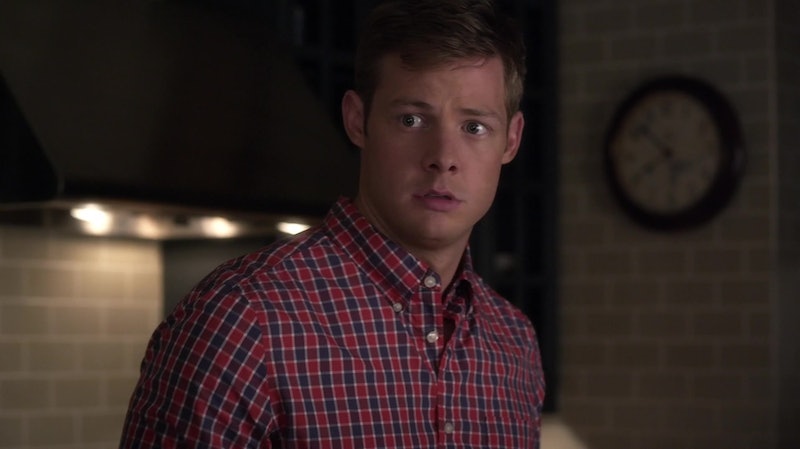 Curse you, Pretty Little Liars. Just when I think there's a viable love interest for one of the girls that isn't involved in the A conspiracy, you have to go and make Andrew look shady as hell. Spencer's one-time strip poker partner and Aria's current love interest (it happened so fast, didn't it?) may be an award-winning honor roll kid, but he's looking more and more suspicious by the day. First it was his rapid interest in Aria that raised eyebrows, and now it's the fact that Andrew could have Mike's attacker (aka the person who tried to make a kabob out of Aria's little brother). Andrew is definitely a suspicious guy, which is why Mona's potential anagram of Charles DiLaurentis is seeming more and more like it could suit Andrew — because whoever Charles DiLaurentis is, he's probably a super bad guy.

We have no idea if Charles DiLaurentis is the real anagram, or if that's a real person. But let's pretend that it is, shall we? Charles could be a relation of the DiLaurentis family, most likely someone that the family kept hidden for a specific reason. My guess is that Charles is a secret sibling of Jason and Ali who was kept away from the family. Perhaps Charles was the illegitimate child of Mr. DiLaurentis and another woman, or the son of Mrs. DiLaurentis with another man. Or, Charles could be unstable — perhaps he hurt someone at a young age and was taken away before the kids registered any memory of Charles. Any of these options would mean that Charles would feel abandoned by his family, which would give him plenty of motivation to hurt them.

If the DiLaurentis family kept Charles — so, if this theory is correct, Andrew — away from their own children, then Ali and Jason wouldn't recognize Andrew as Charles, which would give him the perfect cover to stalk, torture, and potentially kill the family over time. Perhaps Mrs. DiLaurentis was the only one who knew the truth — that Andrew was adopted by the Campbell family — and decided to protect him from afar. But the unstable Andrew wasn't satisfied with that arrangement, so he tried to kill Mrs. DiLaurentis' daughter, Ali, so he would be the only A in Mrs. DiLaurentis' life.

If Andrew is Charles, he could be responsible for trying to kill Ali with that rock. It would make perfect sense — why else would Mrs. DiLaurentis protect the person who tried to kill her daughter unless it was another family member who committed the crime? Andrew could also be the culprit behind Mrs. DiLaurentis' murder — he could be jealous that Alison didn't stay away from home and his "family" and wanted to punish Ali by taking away the mother he never got to have.

It would be a seriously dark, twisted tale, but I'd expect nothing else of PLL.