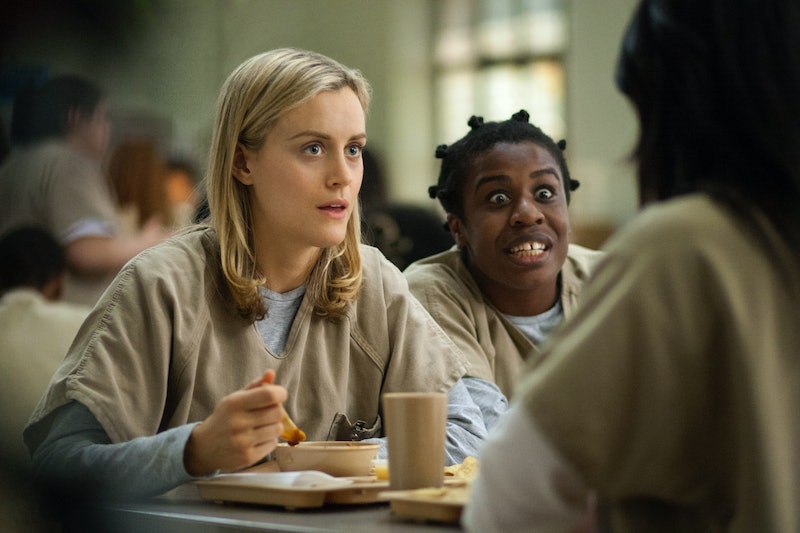 The third season of Netflix's hit show won't even premiere for another three months, but already it's stirring controversy. On Friday, the Television Academy responded to a petition from the streaming service by announcing that Orange Is the New Black will compete as a drama series at this year's Emmy Awards. Despite the fact that Orange Is the New Black is not a drama. And that last year, it competed as a comedy. Oh, awards shows.

The news came a month after the Academy announced that it had changed several rules for the 2015 awards, including the qualifications for submitting a show in the comedy or drama category. Comedies, they deemed, had to be no more than 30 minutes long, meaning that hour-long shows like OITNB, Shameless, and Jane the Virgin were no longer eligible. Earlier this week, per its "exceptions" rule, the Academy had granted requests from the makers of Shameless , Glee , and Jane to be allowed in as comedies, but it seems they weren't so generous when it came to OITNB.

As a result, the prison-set show will now likely compete against contenders such as House of Cards and Game of Thrones, dark, serious dramas with entirely different tones than OITNB. It doesn't make much sense, but then again, nothing about how the Emmys has handled its competitions does; for years, people have campaigned for a "dramedy" category, so that this very problem wouldn't occur, but judging from the new rules, it appears that's not going to happen anytime in the near future.

The decision is surprising, considering the granted petitions for the three other shows. One would think that allowing OITNB, another show with a mixed tone of drama and comedy, would be the obvious next step, but apparently, the Academy did not see it that way. Yes, OITNB might do well just as a drama as it did when submitted as a comedy, but it's frustrating that a show so different from its competition can't be honored for being just that rather than forced into a category it clearly doesn't belong in.

Because, as all fans are aware, OITNB is not a drama — which isn't to say it's a comedy, either. The show is the clearest example of a dramedy currently on TV, and hopefully, the Emmys will recognize this before it's too late. Five times OITNB was clearly a dramedy:

All of the show's first episode, which saw a very unprepared Piper attempting to adjust to her new surroundings, could qualify as a dramedy. The hour zigzagged between her fear over prison life to the hilarity of her first shower to her anger over her sentence, setting the tone for all OITNB episodes to follow.

One moment she was cracking jokes and being OITNB's funniest character, the next she was breaking hearts by asking Piper, "how come everyone calls me Crazy Eyes?" It was a sharp, perfect swerve between comedy and drama.

No scene went from hilarious to terrifying as quickly as this one, which saw a crazed Pennsatucky attempt to kill Piper. The insanity of the situation was too funny not to note, but the look in Pennsatucky's eyes made it clear that this was no lighthearted fight.

Learning the truth behind Morello's love life was scary and surprising, but seeing her sneak into that guy's home and turn her stalking into a love story also made for some of the show's funniest moments.