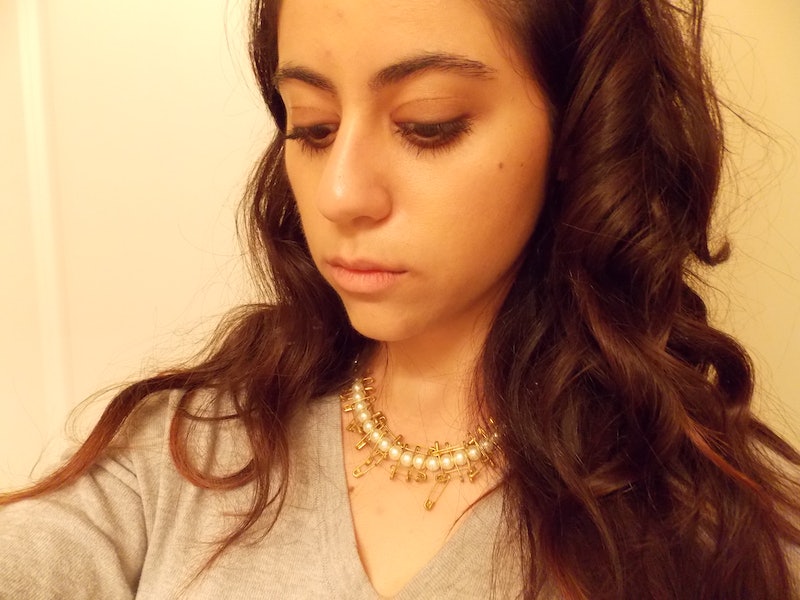 Makeup, much like food, has an expiration date. There comes a point and time when your favorite mascara that you’ve been using for months dries up, or that expensive blush you bought on an impulse purchase years ago thickens like concrete in its pan. While it varies from product to product, almost all makeup eventually goes bad and becomes as lethal and deadly as that moldy sandwich at the back of your refrigerator that you thought you could eat later but has only grown toxic for the past month and a half.

Using old makeup can have many implications, from cysts in your eyes to breakouts, to other reactions depending on how sensitive you are. But I know that no matter how old my favorite shade of lipstick is (it may or may not date back to freshman year of high school), and no matter how many germs I'm aware it may hold, I’m probably still going to use it. But how does an old product’s application compare to a lipstick I bought last week? In other words, does an aged makeup product deteriorate in quality with age?

Like I said before, it probably depends on the product, the brand, and how a product was taken care of during its lifespan. Obviously, if you dropped your holy grail powder compact in the toilet, it’s time to say goodbye. But otherwise, for the products that look just as new as the day they were purchased, do their formulas change with time and make them harder to apply? Or, for makeup, is age simply just a number?

While we all know for a fact that that old sandwich won’t taste as good as the day it was made, I set out to find if it was the same story with makeup.

If this were a high school science fair experiment, my hypothesis would be that the old makeup wouldn’t even be able to compete with the quality and results of my newer, more recently purchased cosmetics. I'm a firm believer that things are better when they’re newer, especially considering how often I come across lists and articles about when to throw out your makeup and why you should never use old products. And sure, maybe this is all just a marketing pitch for brands to encourage customers to purchase makeup more often. But, like I said before, I’m not going to eat an old moldy sandwich just because it’s still in my fridge. It probably smells disgusting and it would likely make me sick (probably? For sure make me sick).

Nevertheless, I also mentioned that my favorite lipstick is easily one of the older products in my makeup bag. I couldn’t bare to throw away my favorite cult product with still a quarter of the tube left, though, even if I know it’s covered in germs and isn’t as creamy as it was the first day I used it.

I’m the kind of person who likes to hold onto my makeup products for as long as possible, until I get the very last bit of use out of them. But in this case, I have the mindset of the person who likes to purchase products as often as possible to get the best quality of use out of them. When I started this experiment, I would've bet newer products simply work better than my oldies. It just made the most sense to me. But I was willing to be wrong.

With the help of my mother’s super old and barely used makeup bag, I scored up some beauty products that have some years on them, but are still in relatively good shape. By the end of the dig, I found an old Estée Lauder eyeliner that’s so old my mom couldn’t even remember when she got it, and the original Urban Decay Naked eyeshadow palette that is at the very least six years old. I combined her stuff with a few of my older makeup products, including a six-month-old L'Oréal Voluminous Miss Manga mascara, an ELF powder, a two-year-old bottle of L'Oréal True Match liquid foundation, and finally, a bullet of MAC lipstick in Hue that I got at least seven years ago.

I decided I was going to do a brown, easy smokey eye look, and that I was going to incorporate another old product: My now discontinued Victoria’s Secret bronzer that I got at least five years ago as well. I figured the more, the better.

In the morning, I applied my makeup like I normally would. But I took extra note of the products right from the beginning to see if I noticed any differences from when I last used them. Because I scarcely use my liquid foundation (I just prefer using concealer to hide blemishes and dark circles) I wasn’t surprised that it glooped out onto the back of my hand. I applied the foundation with my favorite dense brush but it wasn’t smooth; the liquid felt like it spread across my skin rather than really blending in.

The rest of the application went as usual. The super old eyeliner did tug on my eyelids, but it blended well enough to not seem too harsh. The mascara was dry, and again, tugged on my lashes, but didn’t give me too much of a hassle. The powder products I used worked just as they would typically, including my eyeshadow, bronzer, and translucent powder. I went about my day, and revisited my makeup in the afternoon.

By afternoon, I noticed some downfalls. My mascara was already falling underneath my eyes, and was smudging around my nose as well. The foundation was gathering around the oily spots on my face, like by my nostrils, on my chin, and on my forehead. My powder was completely gone, even though my bronzer stayed strong. My eyeshadow started to crease, and while I know my skin is oily, my eyeshadow usually lasts a little longer than a measly three hours. The eyeliner wasn’t as dark as it was when I first applied it either.

I refrained from touching up any of my makeup. It was a struggle not to grab my favorite, three-month-old (basically a baby in this sense) face powder that’s my new love and adoration. And I avoided all contact with my favorite moisturizing chap stick since the lipstick I applied earlier left my lips as dry as the Sahara. I walked away from the mirror, and continued my day.

By nightfall, I was over my makeup. All I wanted to do was wash my face and Get. It. All. Off. The foundation felt super heavy and cakey on my face, and the mascara might as well have been applied underneath my bottom lashes because that’s where it all ended up. Additionally, my oily skin did not help the creasing eyeshadow on my lids. The black eyeliner was almost completely gone, as was my face powder. The bronzer surprisingly stayed pretty potent on my cheekbones but did fade a little, and a lot that was left behind was just glitter.

Compared to my usual makeup routine, this old makeup look was not cutting it for me. The makeup was cakey, clumpy, and barely lasted a day. On an average day, my makeup would still be going strong by the evening. Granted, there may be some flakes of mascara, and I might need to touch up on my powder. But never have I seen eyeliner fade so quick, and mascara fall apart with every bat of my lashes. The gloopiness of the foundation when I applied it seemed to keep a consistent theme and just clumped right onto my face. It wasn’t very pleasant to be walking around with this face on, and I was very relieved to wash it off at the end of the day.

So, I think it’s safe to say that old makeup clearly deteriorates in quality as it ages. Granted, you might find it varies from product-to-product, or brand-to-brand. But what I’ve found is that the liquid products aren’t as long-lasting as some powder products. Eyeshadow can stay good for quite some years, but liquid foundations, concealers, and other creamier cosmetics will probably have to be evaluated on a more regular basis. While it’s easy to avoid throwing those types of products, instead keep them "just in case" you’ll need them one day, it’s probably best you do not do that. From what I’ve found, those products are not going to perform as well as you remember them doing. They’re way past their prime!

So excuse me while I take the afternoon to clean through my makeup collection. It breaks my heart that I’m having to throw away products I spent time and money on, but alas. At least I’ve avoided a makeup tragedy in the future and, of course, I get to rid myself of gloopy, germy messes.

Plus, I have an excuse to shop for new stuff!