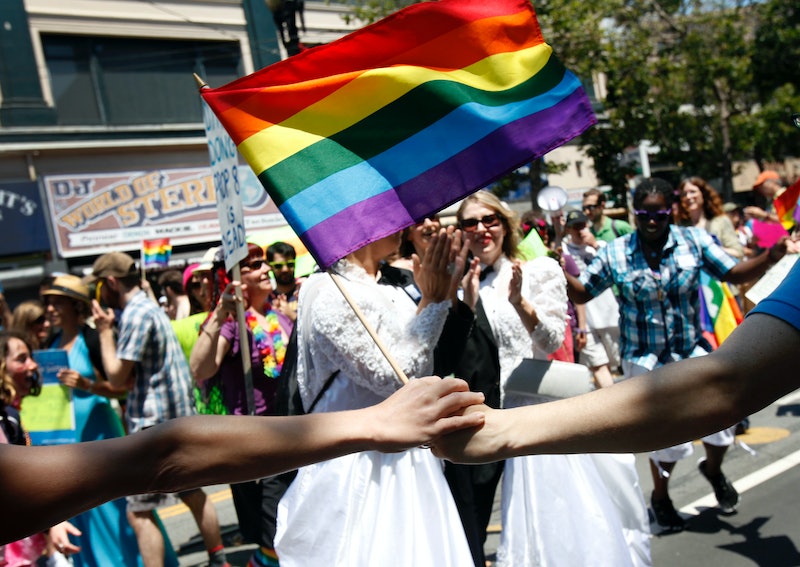 Which cities in the US skew most heavily LGBT? Well, according to The New York Times analysis of metro areas with the most LGBT people per capita, the answer is mostly cities in the West. But perhaps the most surprising thing is the fact that the difference between the cities with the largest LGBT population per capita and the cities with the smallest really isn't a large as you'd think.

Interestingly, one of the main cities you'd expect to make the list, New York, doesn't. Although New York does have a large LGBT community in terms of total numbers, on a per capita basis, it's about average. There were also several surprising cities who did make the top 15, especially Salt Lake City, Utah and Louisville, Kentucky. Although both are in deeply conservative states, it seems that a relatively significant portion of their population identifies as LGBT. In the case of Salt Lake City, The New York Times suggests that it "seems to be a kind of regional capital of gay life, attracting people from other parts of Utah and the Mormon West." In other words, it's a chance for LGBT people to live in a relatively more supportive place without having to move too far from home.

But perhaps the most interesting thing is that the cities with the most LGBT residents per capita aren't that much further ahead than cities with the lowest. Nationwide, according to Gallup, about 3.6 percent of American adults identify as LGBT. The metro areas in The New York Times analysis in turn range from 2.6 percent LGBT residency and 6.2 percent. Which suggests that American's LGBT population is not nearly as concentrated as you might expect. Even the city with the lowest rate of LGBT people per capita isn't very much below the national average. In other words, there are LGBT people everywhere.

But when it come to the rankings, where do specific cities fall? Well here are the five places with the highest and lowest rates of LGBT residents per capita.

Almost all of the lowest metro areas are located in the Midwest or the South.

With LGBT people making up only 3.2 percent of its residents, Cincinnati is a bit below the US average for LGBT residents and has one of the smallest LGBT communities per capita.

Memphis might be known for its music, but it's not known for its LGBT community for a reason. Only 3.1 percent of residents identify as LGBT.

Most of the cities with the lowest LGBT population have rates that don't differ from one another by much — the city with the 15 lowest LGBT occupancy is 3.7 percent LGBT while the second lowest city is 3.0, after all. But Birmingham is an exception, with an LGBT population that's onl 2.6 percent of its total population. Bummer.

But what are the cities with the most LGBT people per capita? Well, more are in the West than any other part of the country, but quite a few cities from other regions made the list as well. Here are the top five.

New Orleans might be famous for Mardi Gras, but now it can also boast about the fact that 5.1 percent of its residents are LGBT, as well.

As a rare liberal enclave in Texas, it's probably not surprising that Austin would attract lots of LGBT people. In fact, 5.3 percent of its residents are LGBT.

Seattle isn't the only city from the Pacific Northwest to make the cut. 5.4 percent of Portland's population is LGBT.

This one really shouldn't be a surprise. After all, it's San Fransisco, the place where pride parades originated, and the first city to elect an openly gay man to political office. And still today, 6.2 percent of the population is LGBT.

You can find out where more cities fall by checking out the New York Times website.