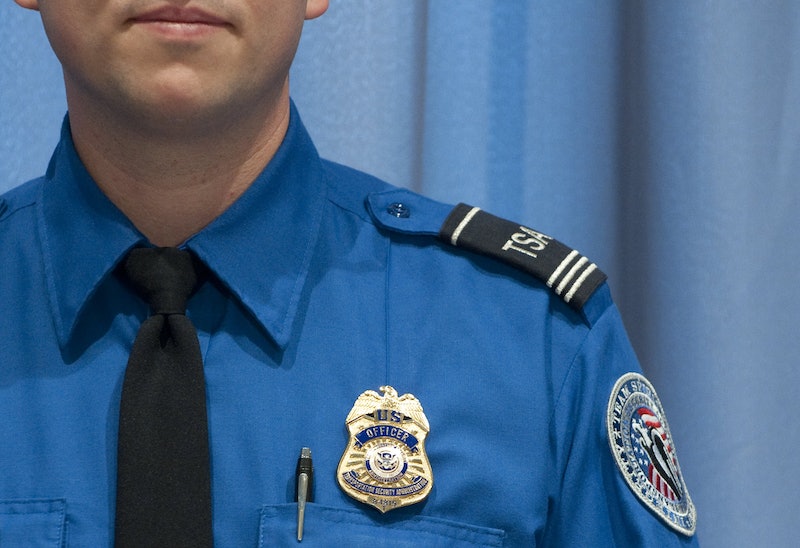 Some new information has been revealed about the harrowing attack on a TSA agent at New Orleans' Louis Armstrong International Airport Saturday Friday night, and it only sounds more concerning: the alleged New Orleans TSA attacker had molotov cocktails in his bag, in addition to the machete and wasp spray that had previously been reported. It's another wrinkle in this frightening, bizarre story, and it doesn't even stop there — the attacker, identified by authorities as a 62-year-old former taxi driver named Richard White, reportedly also had smoke bombs in his car.

He was shot after allegedly attacking TSA agents with both his machete and wasp spray, and according to Jefferson Parish authorities (as reported by The New Orleans Advocate), he was unconscious after undergoing surgery for his injuries. Now, however, it's being reported by multiple outlets that White has died.

So far, there's perilously little known about White's motivations, mental state, or basically anything alluding to the cause of this violent near-miss, and those questions only get tougher to answer upon news of his death. Thankfully, nobody else died in the incident. According to the Jefferson Parish presser, White is believed to have a mental illness history, and his family has been cooperative with the authorities.

Obviously, the presence of items like smoke bombs and molotov cocktails ups the potential hazard and import of this attack considerably. When you start talking about explosive devices in an airport, connotations of terrorism spring to mind effortlessly. There's not much value in speculating at this point, obviously, but It'll be worth paying attention for what information the authorities turn up next. Jefferson Parish Sheriff Newell Normand says that White has a light criminal history — some traffic violations and disturbing the peace charges, according to CNN — but that doesn't seem to shed much light.

The airport, for its part, has tried to move on as quickly and smoothly as they can — as CNN detailed, they've reassured flyers that "the situation is under control and the airport is secure," and maintains that "there is no threat to the public at this time, and the airport is returning to normal operations." Hopefully the people who survived this scary encounter will be able to say the same for themselves soon — "returning to normal operations" has to be a challenge in the aftermath of something so frightening and unexpected.