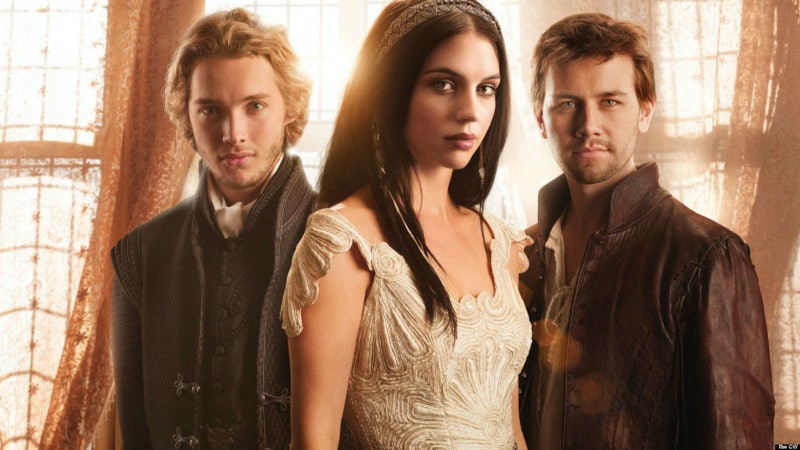 Part of the problem is the word "girly" in and of itself. The word evokes signs of hyper femininity like pink, sparkles, and flouncy skirts, but it also implies a level of immaturity. It can also refer simply to age, but considering the steps Reign's teenage Mary takes to assert herself as a leader, "young woman" would be a more apt moniker than "girly girl" — even if she is decked out in Alexander McQueen gowns and Jimmy Choo shoes.

Plus, the word doesn't often speak highly of the person it describes. As XOJane rightly pointed out, TV shows with "girl" in the name don't often signal the presence of role models: "Consider, for example, the three shows on television right now with "Girl" in the title: They're not exactly hard-hitting political dramas. In fact, the one thing they all have in common is that they're about young women disastrously crashing into strangers, hustling through their financial straits, and getting into and out of shenanigans." Still, Reign is a series about a teenager and thus "shenanigans" may rear their silly heads; "girlier Game of Thrones" could just mean "more focused on a single young woman than about 4,000 characters whose names you have trouble remembering."

The problem is, that's not really an accurate description of Reign, which is basically a campy historical romance that attempts to deal with questions of patriarchal strictures and the lack of sexual and intellectual freedom they created. There is a ghostly mystery as well and one beheading that's no more gruesome than scenes from The Vampire Diaries, but it's pretty insulting to George R.R. Martin to suppose that his influence is expressed in two plot points and that could have been culled from any number of classic books and films. His universe is far more unique than that. And if we're talking time period, it should be noted that Game of Thrones is inspired by the Middle Ages (another thing Martin does not own), while Mary Queen of Scots was alive after that time, during the 16th century.

But beyond those incongruities, there's the issue of Game of Thrones being a show that's somehow not girly or girl-friendly, when in fact Game of Thrones is arguably one of the best shows for women and girls (who are old enough to handle the violent and sexual content) because it features so many young, strong women struggling against the misogynistic rules and norms of their fictional, medieval-esque society.

From young Arya Stark, who's determined to assert herself as a warrior and the governor of her own destiny (even though her tiny stature makes that tough from time to time) to Margery Tyrell, who's an expert at exerting power through persuasion, we find women worth coming back for. Plus, do we even need to remind you about Daenerys Targaryen, Mother of Dragons or Ygritte and her blatant disregard for the care and handling of penises?

If "girly" just means "more young women and fabulous clothing are present" then fine, Reign is girlier. But what it seems to suggest is that Reign is girly because its costumes are pieces of haute couture and the main draw is romance. It suggests that it's a series that replaces Tyrion Lannister's fantastic one liners with gossip and pillow fights. And to that point, I'm not sure which is more annoying: supposing that Game of Thrones isn't a girl-friendly show or proliferating the limited definition of girly to mean "includes shiny things, romance, and cute guys."