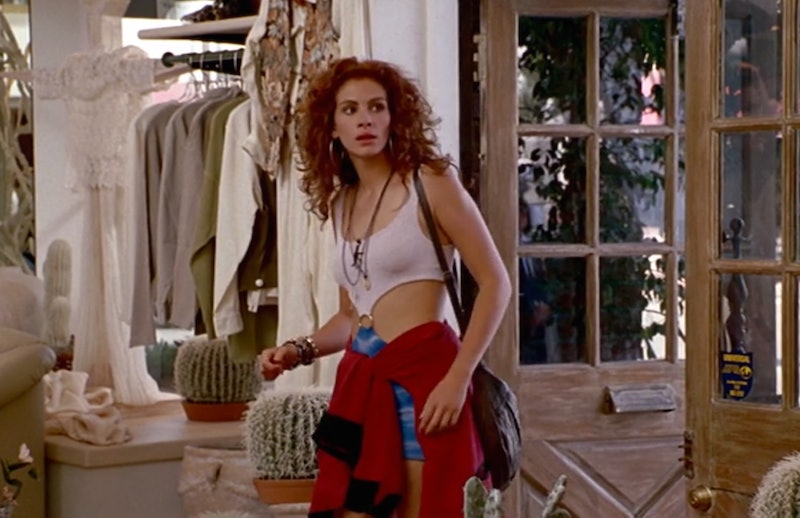 It might be one of the only movies that turns prostitution into a kind of fairy tale romance, but despite its far-fetched scenario and other small issues, Pretty Woman is easily one of the most memorable Julia Roberts movies of all time, and the movie that turned her into a star. And it is potentially a feminist classic depending on how you argue for it, especially if you consider how the film would look with the gender roles swapped. Pretty Woman has now turned 25 years old this year, and it's easy to remember certain elements about it, especially the fashion sported by Roberts' character Vivian. From her iconic "Vivian" dress to her "revenge shopping" outfits montage which ended with that all-important phrase "Big mistake. Big. HUGE," Pretty Woman features quite the range of outfits from absolutely gorgeous to completely, hideously 90s.

That's one of the best things about watching older movies from a time in fashion long, long ago. It's fun to be reminded by all the strange outfits we all once wore, or couldn't wear yet pined for thanks to the price. No matter what you might think of Pretty Woman, it's obviously very difficult to argue that Roberts' range of clothing is really quite spectacular in the film. So in honor of its 25th anniversary and a true love of its iconic style, here is the definitive ranking of the good, the bad and the totally ugly outfits from Pretty Woman,start to finish.

It's just awful. No one should ever wear a pantsuit in shorts again, and that salmon color is not the most flattering. This should not have been the outfit Kit De Luca saw Vivian in for the first time since her big shopping spree. Why couldn't we have brought back one of the more casual, revenge shopping montage outfits?

The sheer sleeves mixed with the stripped dress and the white pantyhose just don't do it for me. It's easily the least favorite out of Vivian's outfits and thankfully again it doesn't seem to be a staple in her wardrobe later in the film.

Pants in a mustard-y color with a top that almost screams kindergarten art project? I'm glad we only get a glimpse of this look because it is not a top contender.

The Going Out Of Town Look

Simple, casual, cute, and the perfect amount of comfort when taking a several-hour bus ride up to San Francisco as Vivian was planning to do. Not the most stylish outfit but definitely still something I would wear for a trip.

More than anything else, I wish we could have seen more of this vintage dress. Without having much to go on, I have to rank it at a lower level, but if the complete look was as cute as I hope it was, this dress could have easily cracked the top 5 outfits.

This moment has a huge impact not only because Julia Roberts is being her trademark sassy self, but because of the shopping bags and the almost My Fair Lady-esque reveal of elegant clothing. Back in the 90s this dress was probably flawless but now I do have some trouble with the awkward shoulders. Yet I'm still loving the dress, and the shoes are vintage perfection.

A cute "little black dress," though not quite as nice as the LBD Vivian wears earlier in the film to Edward's business meeting with James Morse and his son. The necklace and the twirly bottom though are quite fun and girly. But is it just me or is the salesperson's olive pantsuit (or maybe jumpsuit) way cuter than this look?

The Vivian Plus Edward's Shirt

Not as iconic as the Vivian in all its glory, but is it just me or would this look totally work if the skirt was just a touch longer?

I want this look. Blazer on top of more menswear? It's a perfect balance of structured and feminine, and I want it.

We don't really get to see much of this dress, it's part of the montage where Edward and Vivian go out on the town together and fall in love with one another, but can you imagine how adorable it must be if we could see the complete look? It's a gorgeous color, the sleeves and cut on the neck are classy and flirty. I want more of it!

The first moment Edward sees Vivian sitting at the bar, this dress was a winner. I don't love the styling of Vivian's hair here, I think it's just a little too done up and awkward looking, and I'm not the biggest fan of the necklace thing. But overall, an LBD in a shiny cocktail style, I'm all about it. It's a dress fashionable in almost every recent time period.

Maybe I'm the only one here, but this adorable derby outfit is hands down better than some of Vivian's other nicer outfits throughout the movie. It's the most complete look from head to toe. Actually now that I think about it, did Rodeo Drive boutiques in the 90s really sell complete outfits, like where the hat, shoes and purses and other accessories totally matched the dress? Man, the world I was missing. Also polka dots!

An almost perfect look, complete with the gorgeous necklace Edward borrowed for the night. Roberts looks incredible in this outfit and it's easily remembered thanks to the famous jewelry box scene, as well as this line Vivian later hilarious utters at the Opera when asked how she enjoyed it, "Oh it was so good, I almost peed my pants."

It's the most iconic look, and despite the red Opera gown being the most fancy and most beautiful, this is the outfit we always remember from the film. Without this look, there would be no Pretty Woman, at least not the one we know and love.