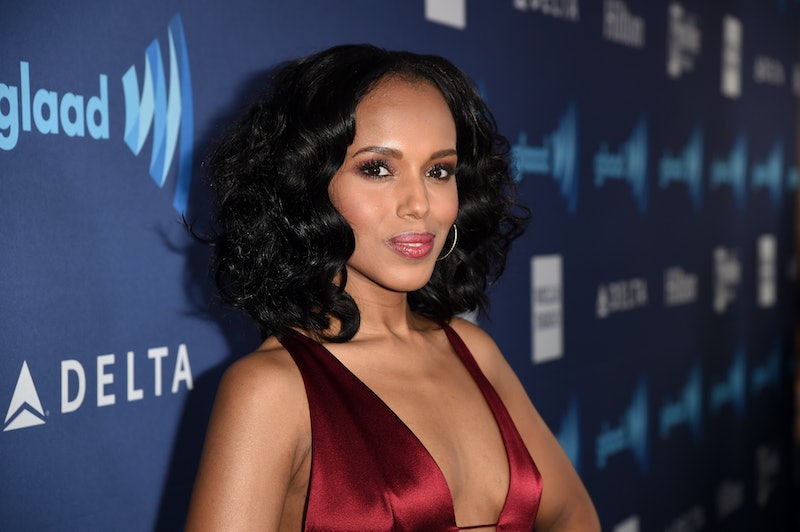 "I'm gonna say some stuff. And I might be preaching to the choir but I'm gonna say it. Not just for us but because on Monday morning, people are gonna click a link to hear what that woman from Scandal said at that awards show, so I think some stuff needs to be said." This is how Kerry Washington's incredible acceptance speech for GLAAD's Vanguard Award began, and it was just the tip of the iceberg in her words that hoped to incite conversation, acceptance, communication, and cooperation between everyone who is categorized as "other."

The award was given to Washington for her continued efforts to be an ally to GLAAD, and Washington did not take that honor lightly. She advocated heavily for change and spoke about how those who do not have the same liberties and freedoms as others should band together in the quest for equality. And yet somehow we've been "pitted against one another," believing there just isn't enough room for equality to be granted to everyone, no matter their sex, creed, orientation, race, ethnicity, or any other distinction for that matter.

Washington spoke that she knows part of the reason for her receiving the award was because of the roles she's played over the years as those segments of society considered to be "others," and that while she has had no choice but to do so thanks to being a person of color and a woman, she has had the choice to play characters who are judged for their differences. And thanks to this those characters become political statements because "having your story told as a woman, as a person of color, as a lesbian, or as a trans-person, or as any member of any disenfranchised community is sadly often still a radical idea." Think these words are powerful? Wait till you hear the whole inspirational, amazing speech.

I'm thinking maybe Washington is even more badass than Olivia Pope, which is certainly difficult to do. Amen to everything you said, sister. Let's make change happen.