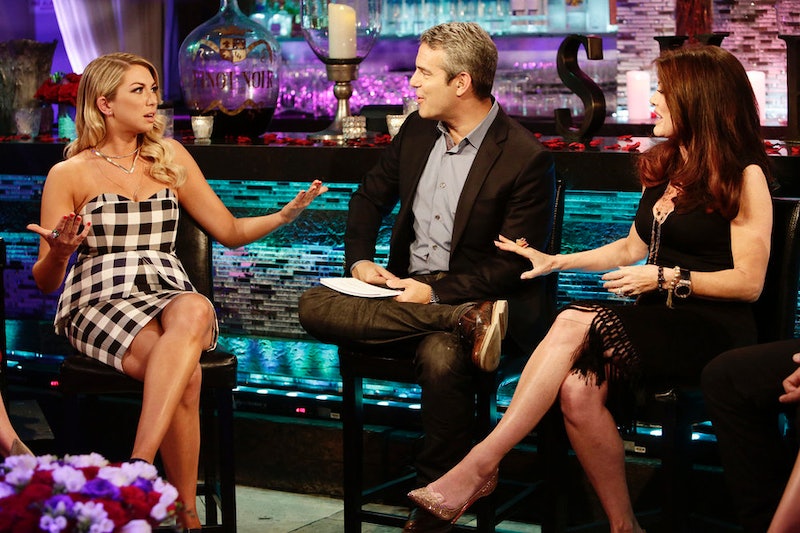 Last week's Vanderpump Rules reunion was a doozy. Katie finally got to tell Stassi how she felt about her, Jax showed off his new Stassi/Carmen hybrid tattoo, everyone got to yell at Kristen, and, per usual, Tom Sandoval and Ariana proved that they're pretty much the perfect couple. It was all relatively par for the course for a reunion special — that is, until Stassi revealed why exactly she hates Scheana. Apparently, Stassi has a sex tape floating around, and while Scheana wasn't the guy who showed Stassi's tape to all of the SURvers, she did see it, which of course is the equivalent of dropkicking 20 dogs in a row in Stassi's book.

But back to the real issue here: Stassi has a sex tape? While I'm not necessarily surprised about the tape itself, since everyone has the right to do whatever they want in the bedroom so long as everyone's consenting, it seems out of character for a raging control freak like Stassi to entrust something so sensitive to someone else. The question remains: Who is the culprit? Who took the time to show the SURvers this scandy video? Here are the four most likely candidates, ranked in order of likelihood from least to most:

You guys remember Frank, right? He was the bartender from Season 1 that Stassi dated after Jax? He got unceremoniously fired from SUR, basically for being a douche. If Frank is the one who showed the tape around, it would kind of come out of nowhere, but maybe he's bitter that his 15 minutes of Bravo fame ended so quickly and he's looking to catapult himself back into Andy Cohen's good graces.

Conclusion: Not likely, but it would definitely be an interesting twist.

I guess this one is kind of tied in with Jax, because I don't think Schwartz would actually have the cojones to do anything even remotely controversial on his own. But who knows? Jax could've blackmailed him or somehow convinced him that showing the video around would vindicate Katie in her fight with Stassi. Schwartz is weak enough that Jax could probably have convinced him to show off a sex tape of his own if he wanted to.

Conclusion: Somewhat likely, but not probable. The only reason I would want Schwartz to be the culprit is to give Katie yet another reason to dump him.

Peter loves to tell everyone about how he and Stassi dated for a little while, so we know they have some sort of sexual history. Before Season 3 though, I never would've thought that Peter would be the kind of guy to show off a video of an ex-girlfriend — he always seemed so nice and responsible. It wasn't until he started pursuing new Pump Rules cast member Vail that I started to realize that Peter is, in fact, kind of a creep.

Conclusion: Kinda likely? Peter's just starting to gross me out, and I'd like to have an actual reason to dislike him as much as I do.

Jax is the obvious culprit. Think about it: he's gross, he lies about literally every possible thing, and honestly, he just seems like the type of guy who would try to humiliate an ex-girlfriend, or even just a random girl who refused to hook up with him.

Conclusion: It seems pretty likely given his proclivity for lying, but Scheana didn't give him up at the reunion, which is suspect.

Mystery Guy: He's Never Appeared On The Show & Never Will

If Stassi's current BF has managed to avoid the cameras, isn't it possible that another past dude has as well?