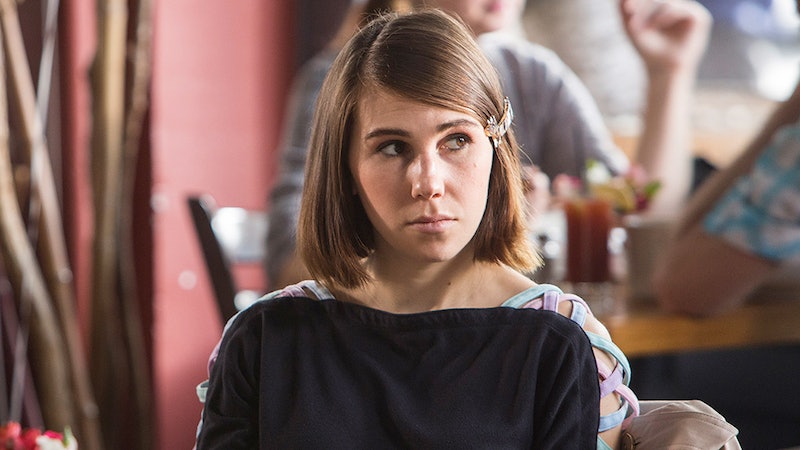 The season four finale of Girls is tonight, and if you relate at all to those discombobulated 20-somethings, you're probably wildly unprepared. Maybe you've been slacking on the past few episodes, or maybe you're confused about a few plotlines. Well, don't fret, because we got an expert recapper on our hands: the one and only Shoshanna Shapiro, retelling season four the only way she knows how... with emojis.

There's a reason Shosh lives by emojis, though: because she otherwise spews mile-a-minute word vomit. And while her rapid fire speed is impressive and she sometimes produces some hilarious non-words ("Budussy," anyone?), Emojis are a much more suffice alternative.

With regards to the end of Girls' fourth season, I decided to have Shoshanna recap the last several episode for you via texts to her friend Radhika (it's been SO long since they chatted). And if you're not fluent in Emoji, don't worry: I've provided a translation that would certainly be Shosh-approved.

Translation: "OK, so Hannah left for Iowa in pursuit of higher education for like, a literal second and then came back. I've tried asking her why, she said it was 'creative differences.' Not important, but you will not belieeeeve this, when she came Adam was dating this totes obnoxious art chick who had like, I hate to admit it, a pretty inspiring TED Talk, but omg, seriously. Hannah had an entire breakdown about it, and refused to leave her apartment and I had to rally her up. You know me, you know how inspiring I am. Hannah said that her and Adam's new girlfriend came to "a negation of minds," but also that she's a first rate psychopath, so whatever, we'll get back to that. ANYWAY, Hannah ended up deciding to teach, so in short she's pursuing... lower education now? Idk, at least someone's making money. Unlike me."

Translation: "So Marnie is totally in a relationship with Desi both professionally and romantically right now. I swear to god, it's actually kind of disgusting how well that worked out for her, especially given the whole Clementine thing. Anyway, now they're shopping around for a record label and they're probably going to be like world famous in a week, but that's not the worst part. The worst part is that Marnie is effing engaged and now I'm going to go to a wedding and like, I have no money to buy Marnie the crystal salad tongs that she probably wants, let alone a new dress. Well, maybe enough for a new dress. I basically just have to stop wearing white until they get married, I don't want to make that mistake again."

Translation: "Jessa's actually been like, really weird right now, and not in her typical bohemian chic way. Like, I've always looked up to her because she has that effortless Kate Moss thing where men just gravitate towards her, but like, she conceived this whole thing to set Adam up with weirdo art chick in order to date this guy Ace. She won't get into the specifics of what happened, but I think it went wrong, because the day after their first real date like, everyone ended up single. Super weird, we definitely need a spa day to talk that our real soon."

Tad and Loreen (and Elijah!)

Translation: "Omg, side note: Hannah's parents may or may not be getting divorced because her father just came out of the closet. Hannah is actually like, surprisingly composed about the whole thing? I wonder if she realizes how crazy it is that she dated a gay man, and then her father ends up being a gay man, and like, I really should ask her if she noticed how funny that is. She IS a little weird about Elijah taking her dad shopping and calling her father "daddy" in like, a sexual way, I guess. Elijah's fine, btw, he joined Hannah on her 5 minute Iowa venture and returned on her heels. We brunch sometimes."

Translation: "Ray is like, absolutely amaze right now. We actually got past our weirdness and have evolved our relationship as mature adult lovers into that of mature adult friends after bonding while shopping at Lucky Brand Jeans. Anyway, I don't know if you read the news or got my Facebook e-vite, but I helped him with his campaign to be on the city council, and he WON.

Translation: "UM, things are... OK with me, I guess. I got this super cute new lob haircut in order to establish myself as a poised and professional young lady, obvi I'll send you some pics later. I went on a date with this entrepreneur from Harvard who runs his own company but he hasn't like... texted me yet, and I wonder if I may have said at dinner. And I've been exploring my options in the working world, going on interviews and... actually there are no jobs for me. I am so jobless. I don't... I don't know how this could happen, I thought I was absolutely reflective of the strong modern women but there is NOTHING out there.