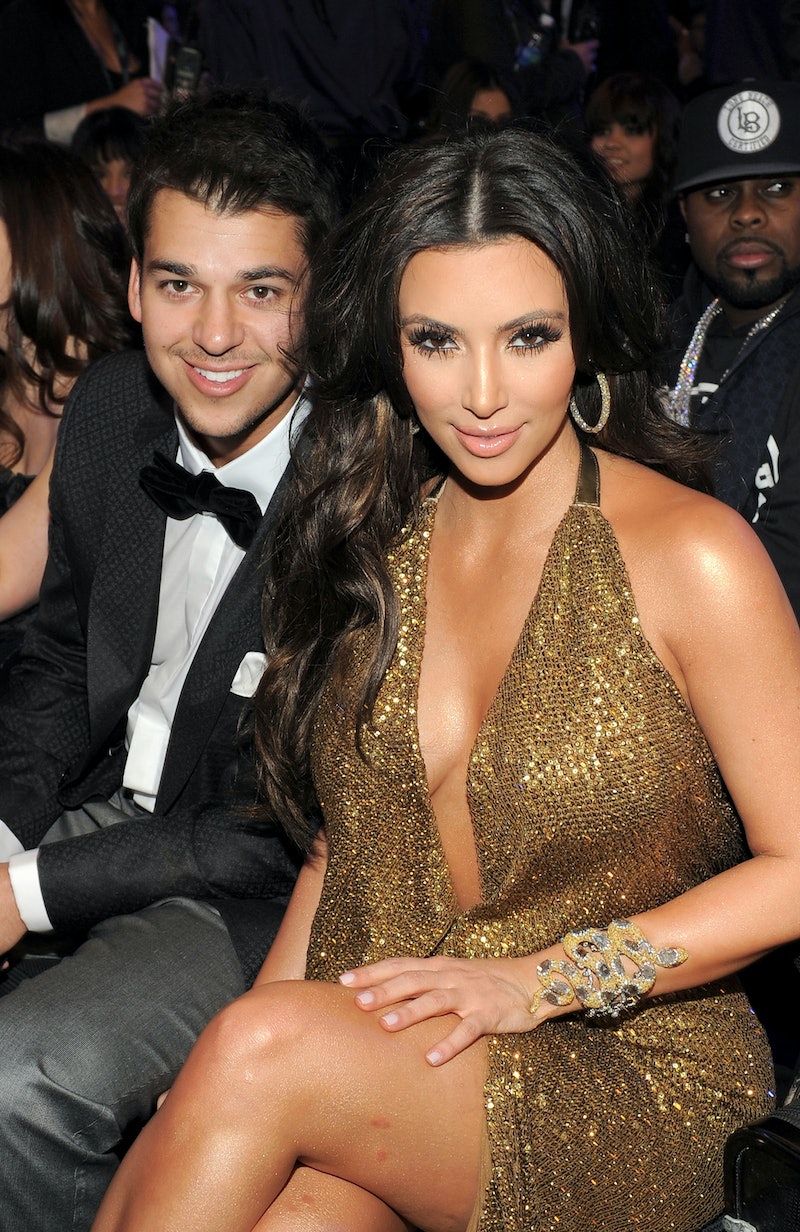 Over the weekend, the Kardashians once again broke the Internet. Specifically, one of them did. Rob Kardashian compared Kim Kardashian to Gone Girl on his Instagram in a way that people aren't quite sure if it is hilarious or mean-spirited. Are they in a fight or is Rob telling a funny joke? The mystery was further complicated by the fact that all of Rob's Instagram posts have disappeared aside from the one possibly insulting Kim — and theories have been flying as to the explanation behind all of this. But why did Rob compare Kim to Gone Girl ? That's something we'll have to wait for an official statement on to know for sure.

Still, the world can't just hang around living in suspense. What fun would that be? There are so many theories that we could ponder about why this happened, theories that all carry some weight in this situation. The most likely reasons are either that the two Kardashian siblings are in some kind of fight or that Rob's Instagram account was hacked, but, until we know for sure, then there's not much we can do besides wonder. So what's your favorite theory about what's going on between Rob and Kim Kardashian at the moment?

See if it's one of the theories below.

When Kim first dyed her hair platinum blonde, we were all quick to realize that she is now a splitting image of Draco Malfoy from Harry Potter. But what if Rob saw something different? What if Rob thinks she's rocking Amy Dunne from Gone Girl-chic? To the best of my knowledge, Kim has yet to walk around in a blood-splattered nightgown, but, hey, I don't know what Kim does with her time.

This is the most obvious answer, and the one people are eager to jump to in the usual feeding frenzy that celebrity feuds tend to inspire in the public. The fact that Rob referred to Kim as the "b**** from Gone Girl..." can be interpreted very literally to mean that he is beyond angry with her — especially since he deleted every other post on his Instagram besides this one. Why he chose so public a forum, and so symbolic a method, to call Kim out on any manipulative behavior (as Amy Dunne is famed for) is beyond me, though.

Maybe Kim watched Gone Girl and just really identified with Amy Dunne. Maybe Gone Girl is all she's been talking about for weeks, and the film is the reason she dyed her hair, and she spends all of her time praying that Gillian Flynn will write a sequel. Maybe Kim even dreams of starring in the sequel, and this is Rob's hint-hint nudge-nudge to Flynn to make his sister's dream come true. Obviously, he had to delete all of his other posts in order to make sure his hint gets all the attention it deserves.

Maybe all of the Kardashian-Jenners named themselves after crazed people from pop culture. You know, Kim is Amy Dunne, Scott is King Joffrey... or Lucious Lyon. The point is, maybe he literally means that Kim is Amy from Gone Girl because it's a joke that the two of them have between them — but now the secret is out. We just don't get the hilarity, you guys.

Another popular theory is that Rob's Instagram account has been hacked, though people can't seem to agree on whether the hackers just deleted every post except the obvious one or if they also posted that one themselves. This seems incredibly likely to me considering how infrequently Rob actually uses his Instagram and how easy it appears to be for any old person to get into a celebrity's Instagram.

Kim is trolling her world and trolling her brother at the same time. Maybe this is an elaborate prank she set up in order to get Rob to call her in a panic, apologizing and insisting that he had been hacked. Then she could say, "Early April Fool's!" and he could threaten not to get her anything for her birthday and everyone could laugh and laugh.

The Kardashians really don't have to do much in order to get worldwide attention, but Rob has been flying pretty low under the radar since Kim's wedding. Maybe this is his way of launching himself to the kind of ridiculous fame that his other sisters enjoy, by giving the world a mystery to solve surrounding the most famous of all the Kardashians. Maybe he's sitting at home right now, twirling a cartoonish mustache and cackling at us all. The world may never know.