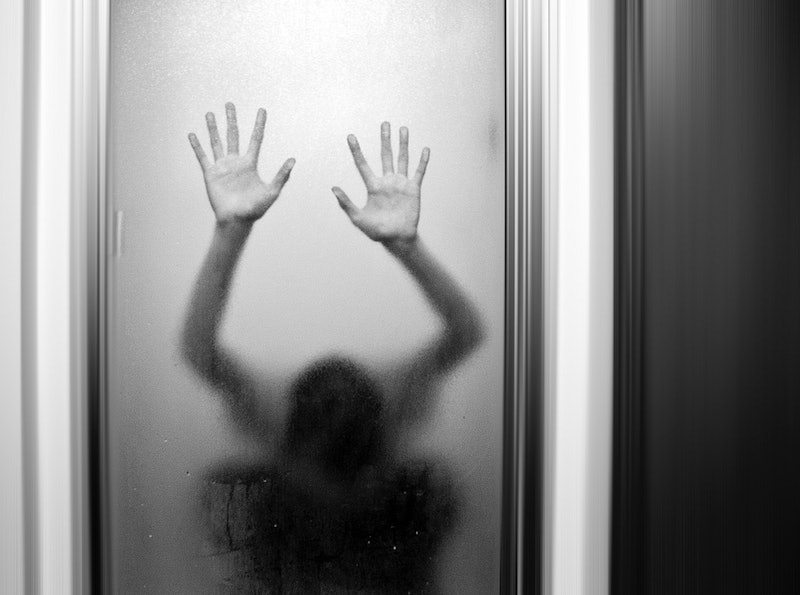 I am all for folks trying whatever sex stuff they want, so long as it's consensual and safe. That's one of the coolest facets of sex: the fact that there are nearly endless positions, tactics, and styles in which one may get down. However, it's no secret that movies are basically lie machines when it comes to representing sex. One example: I don't know any women who actually reached orgasm while losing their virginity. (I mean, having sex in the backseat of a 1986 Volvo is hard enough without worrying about reaching Valhalla on top of that.) Above all non-truths perpetuated in film format and folklore about sex, I have to proclaim the gospel of shower sex literally the worst, most lie-laden one. Shower sex, despite what pop culture would have you believe, sucks so hard. It is terrible and difficult and not worth it. WE NEED TO STOP LIVING THIS LIE, YOU GUYS. There are better ways to get off.

The idea of shower sex as a fun thing is essentially a really mean myth I wish we would all admit to ourselves as fake. For starters, I'm pretty sure everyone who writes a steamy hot shower scene is also a person who has probably never had sex before. Or maybe they're a person who only sleeps with obsessively tidy, Mr. Clean types. Anyway, I wouldn't say the shower isn't useful in getting turned on—fooling around in the shower and washing each other can be a really fun form of foreplay. But once y'all are both ignited, GTFO of there to bone without threat of drowning or slipping to your broken-hipped demise.

To be fair, I understand how shower sex sounds like a great plan in theory: You get to keep all, ahem, fluids contained and simultaneously get clean while getting it on. This Elite Daily video about why shower sex is terrible raises some fair points and, sure, sex stuff is essentially ruled by personal preference. But here is why I definitely believe shower sex is universally a lame plan:

Waterboarding is not hot

Sex should be a happy, marvelous activity. Adding challenges can be cool sometimes, but not when those challenges include actual survival. Trying to avoid getting a face full of shower blast sucks. If you have long hair that gets wet and hangs all over your breathing holes, that creates more obstacles. Sometimes reaching orgasm is challenge enough—why add gasping for air to the mix when you don't have to? We evolved to avoid situations exactly like this, guys. Stop letting down our ancestors.

It's slippery as hell

I know what you're gonna say: "What if you have a chair or sitting area in your shower, dummy, also I hate you?" Well, right. Sometimes showers come equipped with a small resting perch but those are mostly for old people and rich people. I am neither of those things. A lot of people are neither of those things, but that doesn't stop them from trying to get their freak on in a tiny, seat-less shower. And if you see a lawn chair in someone's shower without any reason, you probably don't need to be boning someone who is so clearly next-level lazy. Too lazy to stand up while they wash their ass = too lazy to please you effectively.

If there's any height difference, it's basically impossible

Speaking of levels, getting your sex parts literally on the same level as someone else's can get pretty tough when there's any noticeable height difference. Standing sex can and does happen successfully between couples with differing vertical capabilities, but that's only possible when there is a reliable surface for leaning. When that surface is repeatedly pelted with running water, it does not count as reliable.

Really, for straight couples, there is only one option for positions

It involves the woman doubling over to get rammed from behind while trying to maintain normal, life-allowing breathing despite relentless hot water blasting her face, and that sounds terrible because it is. Also, who wants their face smashed into a possibly-dirty shower wall?

Water does not equal lube substitute

WATER IS NOT LUBE. In fact, water does a damn good job of washing any kind of lubrication away. I had sex in a pool exactly once. Because I was 17 and only when one is 17 does one consider this a cool idea—and only once. Water ironically usually creates extra friction (not the fun kind) and therefore, threatens to leave your Lady Area pretty sore.

There's not a lot of room for error

When banging on a bed or couch or other stationary surface, you always run the risk of whacking your head or knee or something on a wall, sure. But all it takes to correct such a situation is a little scooching over. I guess you could get super wrapped up in the sesh and potentially fall from whatever surface you choose for sexing but...this is very doubtful. And if you do fall, there's likely a carpet or rug or disrobed clothing to soften the blow. If you fall from your very limited sex area while having shower sex, you're surrounded exclusively by hard surfaces. I don't know your life, but the strong possibility of brain bruises makes my vagina feel sad.

We're usually not that cute in the shower

If it's the end of the day, chances are your new shower sex face comes complete with melting raccoon eyes and half-deflated hair. We look like drowning rats and again, I don't know your life, but I don't really wanna fuck a rat, drowning or not.

How clean is this shower, anyway?

Have you ever peaked into a partner's shower? You could be lucky and learn they are Magic Eraser enthusiasts but more likely, you will learn about five new kinds of mold. Grinding important orifices up in these molds is not super appealing.

You don't actually get to shower

Liiike, you're hot and everything but I kinda planned to shave my legs right now.

Also, since when did we become the self-appointed czars of the world's water supply? Isn't California experiencing a major water shortage? How about we keep showers quick and sex long and awesome? Just one idea.

Soap up, get turned on, rinse off, then turn off the water. Life and sex should not be so incredibly difficult—there's no reason.

More like this
The Best Time To Date After A Breakup, According To Experts
By Bustle Editors
Jennifer Coolidge Got A Lot Of “Action” Thanks To 'American Pie'
By Catharina Cheung
20 Things You Should Never Tolerate In A Relationship
By Rachel Sanoff and Kathleen Ferraro
Are Virgo & Capricorn Compatible In A Relationship?
By Kristine Fellizar
Get Even More From Bustle — Sign Up For The Newsletter