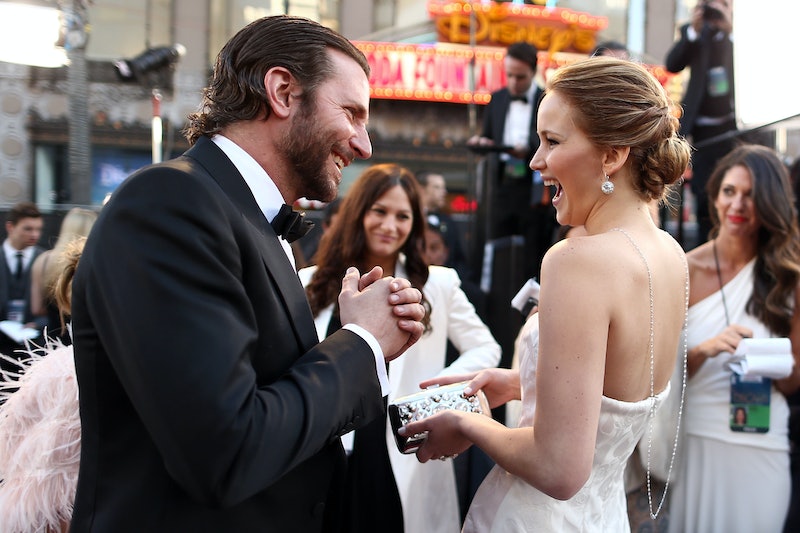 Of all the people in the world, there is no one I 'ship harder than Bradley Cooper and Jennifer Lawrence. They are literally the perfect couple, and I'm not the only one who thinks so. Despite the prolonged presence of Suki Waterhouse in, and her recent departure from, Cooper's life, his on- and offscreen chemistry with J. Law continue to leave people wondering why these two aren't together. J. Law recently admitted that Cooper was basically her work husband, teasing us all and making us consider the myriad of ways in which Cooper and Lawrence are perfect work spouses.

I know the terms 'work wife' and 'work husband' get thrown around a lot, so I did some digging to see what the proper definition of the term was. On the Wikipedia page for "Work Spouse" — because there really is someone out there willing to put the time and effort into editing the Wikipedia page for "Work Spouse", likely someone who is trying to justify their work spouse to their actual spouse — work spouses are explained like this:

With so many of the quality hours of a day spent at work, having someone there who has an intuitive understanding of the pressures, personalities, interactions, and underlying narratives of the workplace society can add safety and comfort to what can otherwise be an alienating environment. 'Work marriage' appears to be a genuinely caring relationship fostered by the propinquity effect and associated with love-like feelings and possibly limerence Some 'work spouses' admit that sexual attraction between them is present, but is not acted upon, and the sexuality is 'channeled' into a productive collaboration.

J. Law and Bradley Cooper might as well have written the metaphorical book on work spouses. We've seen them together in Silver Linings Playbook, we've seen them in American Hustle, and now we'll be seeing them onscreen together with the release of their new film, Serena . With all of these collaborations, it's hard not to notice all the ways that Lawrence and Cooper are perfect work spouses.

They Are Both Pretty Good at Their Jobs

With 1 Oscar win and 6 Oscar nominations between the two of them in the last five years, it's safe to say these two are a good collaborative duo. I mean, they are just completely slaying it in their line of work over and over again, no big deal.

He Is So Supportive of Her...

Cooper is never hesitant to sing J. Law any praises for her talents. At the screening party for Serena, Cooper said of his work wife: "I respect her so much as a professional, as an actor, and I think she’s the best there is. I just learn from her. You always want to work with people who are better than you."

...And She Supports Him, Too

It's clear that J. Law looks up to Cooper, and she is never one to be shy about how he inspires her.

They Know How to Nomz

Apparently both Cooper and Lawrence know how to throw down when it comes to eating. In Lawrence's own words, "We're both two of the biggest eaters in Hollywood!"

They Keep It In Their Pants Off-Set

Despite their sexual chemistry on-screen, Lawrence was sure to clarify that her work marriage with Cooper is totally platonic. This is obviously a key stipulation of successful work marriage. This is also key to their onscreen chemistry; as Joey from Friends wisely taught us, "The rule is when two actors are actually doing it off-stage all the sexual tension between them is gone. Okay? So as long as it’s hot onstage you got nothing to worry about. It’s when the heat goes away, that’s when you’re in trouble."

He Didn't Even Laugh When She Fell at the 2013 Oscars!

If that's not a knight in shining armor right there, I don't know what is. We all remember J. Law's epic fall at the 2013 Oscars, but probably not everyone remembers Cooper rushing to her aid immediately upon seeing her begin to tumble. And he didn't even crack a grin at her misstep. #truelove

They Are Perfect In Every Way

I seriously don't think they could be anymore perfect for each other. It seems like these two will forever tease us with their perfect chemistry but I, for one, will never give up hope that someday these two will drop the 'work' from their 'work spouses' relationship.