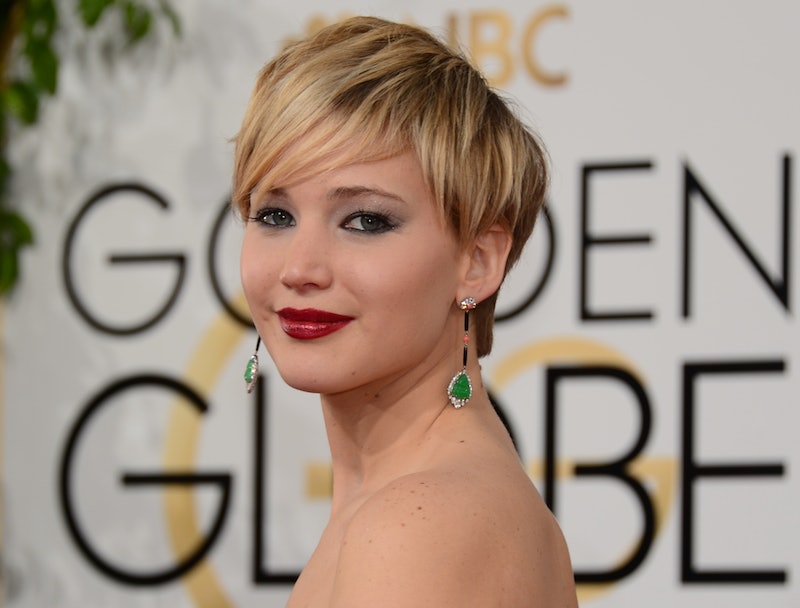 It's official, as in actually happening: Jennifer Lawrence is leaving X-Men after X-Men: Apocalypse . It's probably fair to say that whenever Lawrence leaves a film, terror flashes through, at minimum, three studio executives' eyes. But what does this departure mean for the X-Men franchise? Will the X-Men movies wrap up after Lawrence leaves? Despite Lawrence's undeniable power over the box office, I'd say this series is going to be fine, that it may even just be getting started — as long as they play their cards right from hereon out.

It's important to note that, while Mystique was crucial to Days Of Futures Past — she was the lynchpin in the whole plot — the series hasn't always focused on her. There is plenty of room to move on without her even now that Lawrence is the biggest movie star in the world. Mystique's a great character with a lot of potential, but X-Men is a sprawling world that is full of great characters with a lot of potential. The retcon of the end of X3 in Days Of Futures Past ensured that the new life First Class built into the franchise could keep going, and, while Lawrence certainly helped (there's no denying she's a major box office draw), the "whether or not X-Men should continue" question revolves mainly around story, not around her. Both she and X-Men staple Hugh Jackman could jump ship and there'd still be plenty left to do.

It should also be noted that now that Spider-Man's re-joining his Marvel cohorts the Avengers, the X-Men series is in an interesting place: They, too, are of Marvel origin. There are even a couple mutants in Age Of Ultron via Scarlet Witch and Quicksilver, though they weren't allowed to use the m-word. However, they're still floating around that weird world in which studio rules dictate there shall be no crossover. If there were to be a deal allowing the two to connect, that would open up miles of canon rife for exploration, and theoretically extend the life of all of these superhero movies by decades. Alas, no such deal is even rumored, but a girl can dream.

The bottom line here is that X-Men has a lot of characters, and, though Mystique has been crucial up to this point and will probably play another crucial role in Apocalypse, it's hardly as if they've got nowhere to go from here. And if you're worried if they'll find another female character to plop into the center of these movies? If they're smart they will, and if they're smart they'll write her right. They're surrounded by some of the best options in all of comic book history, and Apocalypse promises to give us younger versions of both Storm and Jean Grey, the latter of whom will be played by Game Of Thrones ' Sophie Turner and the former by Alexandra Shipp.

They didn't knock it outta the park with older Storm, but here's to hoping they do better with the younger gen and beyond. This series has some pivoting to do, and what they do next will determine exactly how viable this promising series is in the long run.