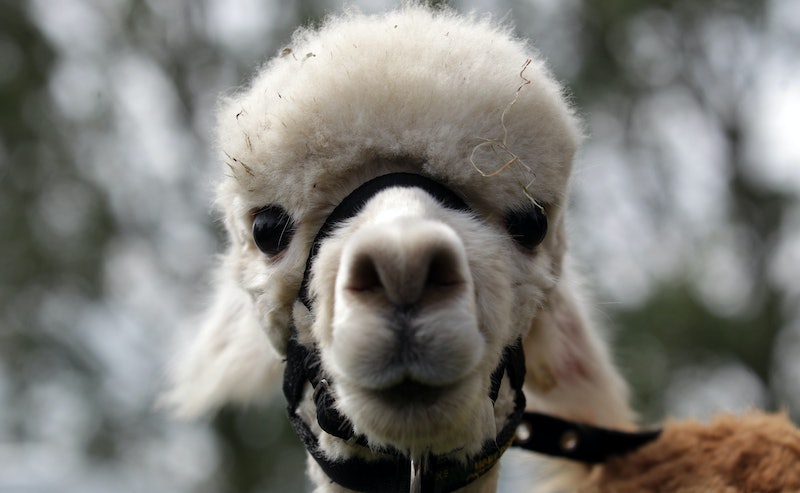 When an escaped llama and goat surprise a man, an unsuspecting plumber, you get a recipe for laughs, viral video stardom, and... speculations about a new Disney prince? I'm sure all of the above were the last things Stephen Peterson expected when he filmed a llama and a goat approaching him after he left work one Friday afternoon. According to the video, what he thought to be a dog turned out to be a "goat in the middle of a business type district in Liverpool, NY." In the beginning of the video, he screams, "This is really happening! There's a goat! Why is there a goat? Hi!" Not too long after at the 0:18 mark of the video, a llama gleefully trotted into the picture: "Oh my God! There's a f*cking llama!"

This is all so wonderful because, honestly, it's exactly the right mix of delight, confusion, fear and excitement that any sane person would experience if this happened to them. "I got bum rushed by a Llama and it scared the hell out of me as you can tell by the screams," Peterson goes on to explain. Yeah, pretty much!

After the initial shock seems to wear off, Peterson continued to be very warm and affectionate towards the two animals. At one point in the video, he even said, "I guess I have a pet now." The magnetism between him and the furry pair lead several YouTube commenters to speculate about his potential for being Disney royalty, which, if you think about it, makes perfect sense. Disney princesses normally have a penchant for attracting animal companions (Snow White? Cinderella?), so why can't Disney princes? And who better to do it than this man who managed to unknowingly called a llama and a goat to his side one day after work? Even he seems to down for it:

Fortunately, the future Disney Prince managed to get the animals back to the safety of their owners. Here's to hoping they will reunite in the made-for-TV animated feature, "The Plumber's New Groove."