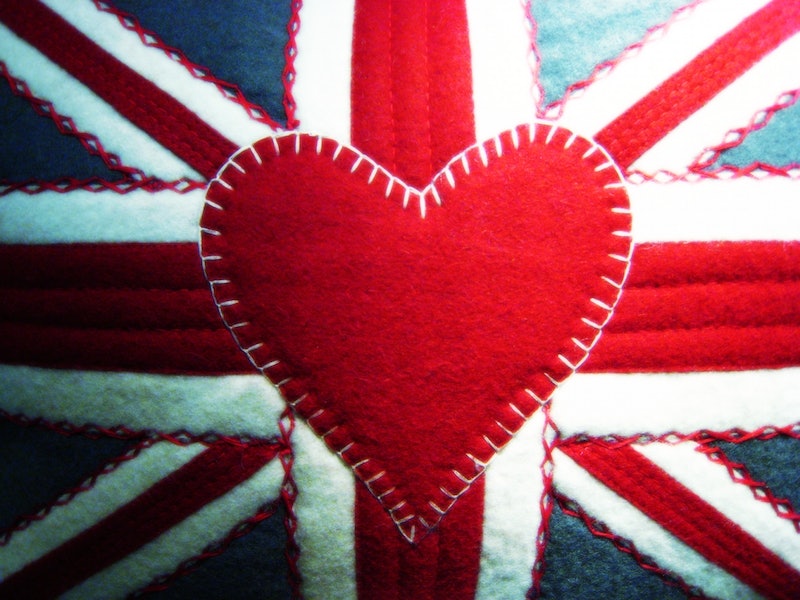 I am a very firm believer that studying abroad is one of the best things you can do in college. I know that there are some major hurdles involved in going to live in a foreign country—like timing, money, and language—but I would urge anyone in their college years to try to make it happen. You’ll see the world, learn about other people, learn about yourself, and maybe even learn a language. I studied abroad at a university just outside of London when I was a junior in college, and, many years later, I still regard it as one of the best decisions I ever made.

For me, choosing the UK as my new temporary home was a no-brainer: By the time I was 20, I was already a hard core anglophile, consuming everything that British literature and the BBC had to offer and wishing desperately that I knew how to say words like “Gloucestershire.” My actual study abroad experience more than lived up to my English-accented fantasies, and I left with a deep, abiding love for the UK. There are still a lot of things about England that I still miss on a daily basis—if you also studied there, you might recognize them:

Americans do a lot of things very well. Making tea is not one of them. I became a tea addict when I lived in England, and have been living the tormented life of an American tea lover ever since. Coffee shops often simply don’t know how to make tea properly: The water isn’t hot enough; The tea is under-steeped (or over-steeped); There’s not milk available, only cream; The barista has fastened the tea bag to the cup so well that it’s impossible to remove it and the tea gets bitter. Why would you do such a thing?? Oh, the ANGST!

In England, tea is a way of life, and a cure for all ailments. Are you sick? Have a cuppa. Sad? Here’s more. Visiting? You must need tea. Cold? Tea. Happy? Celebrate with tea. It’s a national religion. To get a true sense of tea lovers’ passion for a freshly brewed cup, check out this awesome rant from Doc Brown, an English rapper/comedian:

McVitie’s biscuits are an English institution. A 2011 article in the Washington Post claimed that 52 McVitie’s biscuits are eaten every second; I don’t know if that’s actually true, but I would believe it—in fact, it wouldn’t surprise me if the number was higher. In the US, a biscuit is a flaky, buttery, bready thing, but in England, it’s closer to a very plain, crunchy cookie that pairs perfectly with tea. McVitie’s sells the gold standard for biscuits in England, in varieties including Rich Tea (an almost cracker-like biscuit), Digestives (a more substantial, wheatier biscuit), and HobNobs (my faves—an oaty, knobbly biscuit). There are also caramel and chocolate-covered varieties. You kind sometimes find McVitie’s at import stores in the US, but they’re generally scarce on this side of the pond. It’s worth the effort if you can get your hands on a roll—tea always feels incomplete without a biscuit to dip in it.

In my hometown in Texas, there was a little neighborhood of houses that were built just before 1900. They had been refurbished, marked as historical buildings, and made into a museum. In England, those houses would have been like thousands of others, and people would have lived in them, because, in the UK, a century is nothing. One of my favorite aspects of England is simply that so much of it is old—walking around a city like Cambridge, for example, you’ll randomly stumble across buildings that are entering into their sixth or seventh century on the planet.

One thing you’ll miss after studying abroad in the UK is hanging out at pubs, watching football (the non-American version), playing trivia, and chatting over a pint. There is really pretty much nothing better.

Britain produces some fantastic television: Sherlock, Doctor Who, The Fall, The Office, Coupling, Downton Abbey, The Bletchley Circle, Scott and Bailey, Black Mirror, Spaced, and all the literary adaptations that end up on ­Masterpiece Theatre in the US. Eventually most of these shows make their way to America, but it’s so much easier to get them from the source.

Britain has just as much crap telly as the US does—it is, after all, the nation that gave us Big Brother. But I love a lot of terrible UK shows for their utter ridiculousness—the last time I visited, I was addicted to Top Dog Model (yes, it is a modeling competition for dogs) and Embarrassing Bodies, a reality show about people with bizarre health conditions (and because UK TV is less regulated than in the US, you get to see all the gross/salacious stuff).

7. Everything is close together

Geographically, England is much, much smaller than the United States, making it much, much easier to get from one end of the country to another. I grew up in a state that is so large that you can drive for 14 hours and still be within state borders. The idea that I could get from London to Edinburgh in seven hours completely blew my mind.

I’ll say this up front: England has terrible weather. If it’s not raining, it’s drizzling, and if it’s not drizzly, it’s foggy. But one upside to all that water is that the plants are gorgeous—you kind find amazing, lush gardens pretty much anywhere. If you’re from one of the US’s many arid states, English flowers seem positively glorious.

Pimm’s No. 1 Cup is a gin-based drink invented in England. Usually people mix it with lemonade (which in England is a sweet, carbonated liquid), fruit, and mint. It’s sort of like the English version of sangria—delicious and super refreshing.

Boots is a major pharmacy chain found all over the UK. The shops sell a huge variety of products, and Boots’ own line of skincare products is awesome and inexpensive. Every time I visit England, I come back with a suitcase of Boots products.

More like this
These Are The 3 Most Mellow Zodiac Signs
By Kristine Fellizar
TikTok’s Viral Tunacado Sandwich Is The Internet’s Favorite Lunch Right Now
By Alexis Morillo
How Long Does Leftover Stuffing Last? Here's When To Toss It
By Chelsey Grasso and Alexis Morillo
Pepsi’s Festive Flavour Is Finally Coming To The UK
By Sophie McEvoy
Get Even More From Bustle — Sign Up For The Newsletter