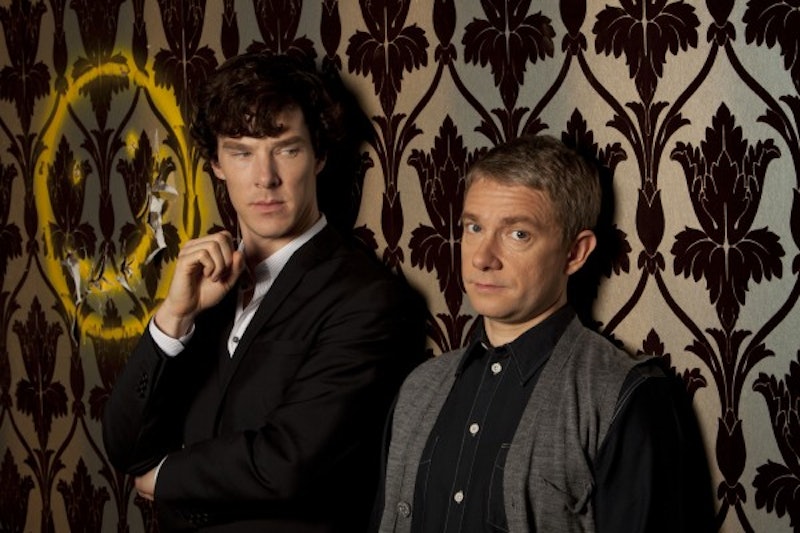 I’ll admit it: I suffer from Anglophilia. That is, I love all things British, unabashedly. What’s not to love? The British have great accents, they know how to make a proper cup of tea, they’ve got castles everywhere plus they have universal health care, and they make great television. OK, so I know the country—and my love for it—is more complicated than that, what with a centuries-long history of imperialism and all, but I’ll stand firmly by the TV thing. It’s excellent.

If you, too, love British television, or you think you might love British television, if only you had some obsessive BBC-watcher to shower you with recommendations, this is the guide for you. It would be impossible to contain all of the wonders of British TV into a single post, so I’ve limited myself to only a few samples from different genres—a “starter pack,” if you will, of some of the best that British television has to offer. I’ve tried to create a delicious cocktail of both classic shows and ones that are still currently airing, but really, my message is simply, “Go! Go forth and watch!”

I'll just put this directly out there: British humor isn't for everyone. It tends to be a bit drier and more ironic than the kind we enjoy in America. But for those of us who like like our laughs to come with a strong dose of snark, British comedy is the best.

A cornerstone of British comedy. There is nothing more to say other than that this show is totally brilliant and if you do not like it, then your mother was a hamster and your father smelled of elderberries.

The Office and Extras

As any Anglophile will leap to tell you, The Office was British first!!! Ahem. Sorry for the outburst. Actually, the American version is great, but Ricky Gervais's original is awkward, hilarious, and often unexpectedly heart-wrenching. It's worth watching, even if you do have "Jim & Pam 4ever" tattooed somewhere on your body. Gervais followed up with a second series, Extras, which features actors from Kate Winslet to Daniel Radcliffe to Sir Ian McKellen playing hilarious, often ridiculous, versions of themselves.

It's only natural that the country that birthed Sherlock Holmes would know how to make a great TV mystery.

The show that launched a thousand Tumblrs, Sherlock is a contemporary update of Arthur Conan Doyle's classic detective stories. The show is well-written and well-acted by leads Benedict Cumberbatch and Martin Freeman, it's only downfall being the tortuously long waits between seasons. (Season 4, will you ever arrive??)

I love this show so hard. Set in a post-war England, The Bletchley Circle is about a group of lady code-breakers who start doing detective work. What could possibly be better?

This is the nation of Shakespeare, people. Of course there's great drama.

A crime drama set in Northern Ireland, The Fall follows a female investigator as she pursues a serial killer. What sets this drama apart from other crime series is the fact that show let's us into the lives of both the detective and the killer, often to very chilling effects. Gillian Anderson is riveting, as usual; Jamie Dornan, the soon-to-be star of 50 Shades of Grey, is so creepy as the killer that I will never, ever be able to find him attractive, no matter how much he take his clothes off in that movie. I mean that as a compliment.

England is so good at period film that it gets its own category. You can check out my previous post about British historical dramas here.

If you haven't already seen this adaptation of Jane Austen's most popular love story, what are you doing with your life?? Mr. Darcy is seriously displeased. Go watch it right now.

I've been loving this recent series, which tells the stories of a group of midwives working in East London in the 1950s. Emotional, funny, and just the right amount of heart-warming, this show does a great job of exploring the lives of women: their work, their families, and their relationships with each other.

British science fiction ranges from the goofy to the terrifying. Or, in the case of Doctor Who, it's goofy and terrifying at the same time.

Having celebrated its 50th birthday just over a year ago, Doctor Who should rightly be called a British Institution. Following the adventures of a centuries-old alien as he careens across time and space in a blue police box, the show is fun, silly, scary, and altogether wonderful.

Black Mirror works in the spirit of The Twilight Zone, with each episode presenting an entirely new cast and storyline. Many episodes consider the consequences of contemporary technology and social media, in thought-provoking, sometimes deeply disturbing, ways. I won't go into any specifics because you definitely don't want spoilers here, but get thee over to Netflix (where the show has recently become available), and prepare to have your mind blown in the best way.

More like this
Ryan Gosling Is Officially Ncuti Gatwa's Biggest Fan
By Maxine Harrison
Here's How To Stream 'Downton Abbey: A New Era' & The New 'Downton' Channel
By Alice Broster and Sam Ramsden
What’s New On Netflix: 'Stranger Things' & 'Mean Girls'
By Arya Roshanian
What’s New On Netflix: The Return Of 'The Umbrella Academy'
By Arya Roshanian
Get Even More From Bustle — Sign Up For The Newsletter