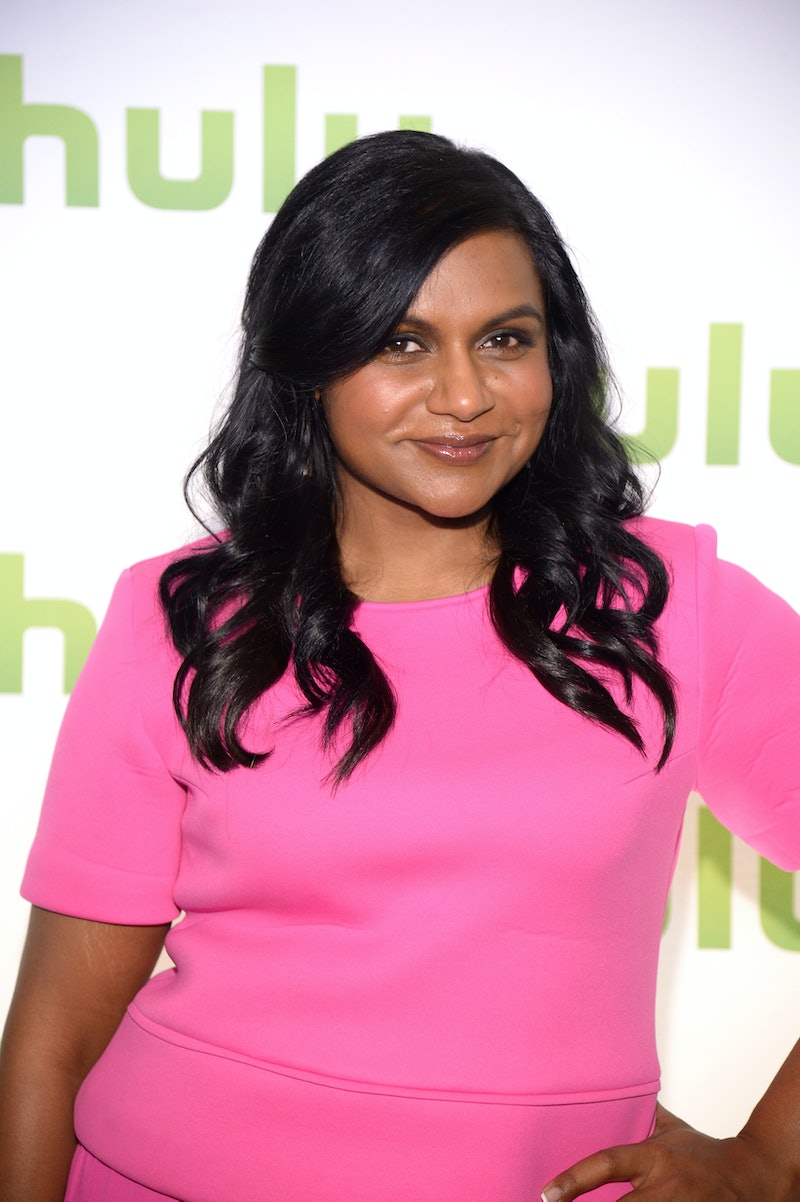 By now, it's basically fact that Mindy Kaling is an authority on all things related to romantic comedies. Not only is she a vocal fan of the movies in real life, but her fictional self, Mindy Lahiri, applies common themes from rom-coms to her actual life on The Mindy Project all the time. And being that movies based around a love story, various hilarious mishaps, and potentially a makeover scene or two are my favorite kind to watch, I definitely understand wanting to know what happens when the movie ends. The happy ending can't be all there is to it, right? I am not alone in thinking this, and in a recent interview with E!, Mindy Kaling gave her opinion on famous rom-com couples and whether or not they'd still be together.

After reading her imagined futures for the relationship, I agree with a lot of what she's saying... even if, realistically speaking, some of my favorite couples wouldn't make it past the credits rolling. Because unfortunately, rom-coms often end with a couple getting together, and we never get to find out about the hard stuff that follows. Like what happens when the honeymoon phase is over and Meg Ryan starts to realize Tom Hanks actually does have morning breath, or the first time they disagree about something stupid and it blows up into a big fight?

Here's what Kaling thinks about these classic couples. Usually, she's right on the nose, but some of her theories could use a little bit of work.

Kaling's right — Harry and Sally probably do disagree a lot more than the average couple, but it's what keeps their relationship interesting. Their underlying friendship is obviously strong enough to ensure that they grow old together, though, and not just because Harry's too old and tired to find love. More because he knows now that everyone is flawed, and he loves Sally enough to put up with her flaws. And their grandchildren will be adorable, and gather around to hear their timeless love story every Christmas. The end!

There's no way. That relationship is really not…like, one Thanksgiving dinner at Richard Gere's house and that's done. That's a relationship that burns brightly but doesn't last.

I hate to agree with Kaling on this one, but she's right again. Edward and Vivian come from two totally different worlds. I can't imagine that, 25 years later, they're still together having raised a family.

Kathleen & Joe From You've Got Mail

Oh yeah. They are definitely together. Forever.

100 percent correct. You've Got Mail is the holy grail of rom-coms. It's the first movie I watch when I'm sick and has been since middle school. They fight a lot, much like Harry and Sally do, but the bottom line is that they love each other and their children, in whom they've fostered a lifelong love of reading.

I love Helen Fielding as a writer, so I respect the way that she writes the characters and I want to respect her as the author of that amazing love story. My feeling with the two of them, because they're so real, the characters would've gotten married, had kids, gotten divorced and then started dating again as they got older. Like still be in love with each other and maybe even grown old together, but technically not be married. Bridget is such a handful that she would drive anybody crazy.

I don't think they even would have made it to the altar, honestly. Bridget needs someone more like her who will balance out her crazy with some crazy of his own.

Oh, I don't think that's a relationship that would stand the test of time. They're just too young. One semester as USC for her and she'd be like, "Forget it."

Kaling, this is blasphemy. Don't you ever speak these words again. Josh and Cher forever!

Sam & Annie from Sleepless in Seattle

Yes. But for different reasons. In You've Got Mail, they stay together because the two of them are a little bit older and I think that they had been through these relationships that were bad…they had to get that out of the way, but that they were ready. They were going to stay together. InSleepless, that movie is interesting because they're so pure. You know how in You've Got Mail, both of them are a little, especially Tom Hanks' character is a little competitive and he's kind of a d—k and a businessman? I kind of like that movie better than Sleepless in Seattle because in Sleepless in Seattle they're both so perfect and good-hearted. And so for him, he's a widower with the world's cutest son; she's got the heart of an angel and is so sweet...I think they wouldn't break up because they're so good. I don't recognize those characters as much as I recognize the You've Got Mail ones.

EXACTLY. Now can we all just pretend that Meg Ryan and Tom Hanks got married in real life?

More like this
Only 3 Of The One That Got Away Couples Seem To Still Be Together
By Brad Witter
The 'Spiderhead' Movie Ending Is Nothing Like The Short Story It’s Based On
By Morgan Leigh Davies
Eva Mendes Just Claimed Ryan Gosling’s “Ken” Underwear
By Rachel Mantock
At 28, Emma Thompson Was Already A Star — But Unhappy In Love, Actually
By Olivia-Anne Cleary
Get Even More From Bustle — Sign Up For The Newsletter