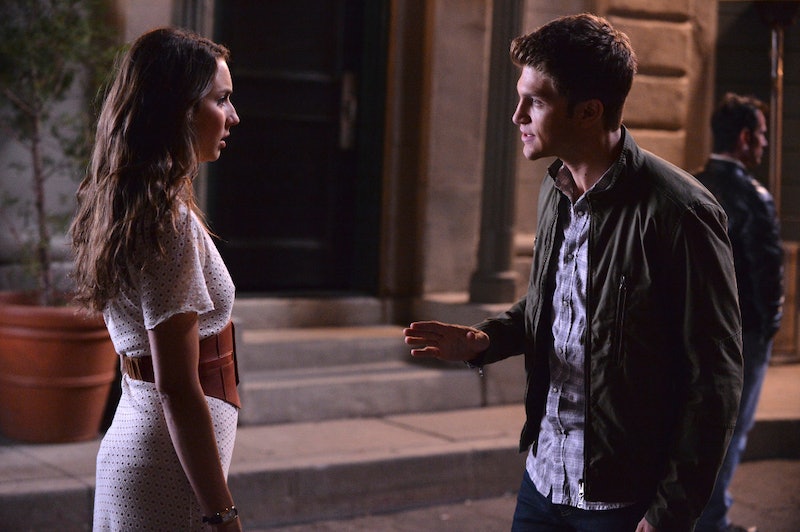 It's not exactly news that, in the search to reveal Big A on Pretty Little Liars , Toby's name has come up more than a few times. However, as time went on and Toby dropped out of high school to become a police officer (because suuuuuure this one made sense), he sort of dropped out of suspicion. However, what people don't realize is that he's still up there on the list of potential culprits, and if after everything Toby turns out to be Big A, the show is in for a major change.

In some ways, this reveal would be even bigger than finding out that Maya was actually alive or that Ezra really had been A all along. Think about it: This wouldn't be some kind of soul-crushing reveal or out-of-nowhere shock like some past A suspects have been. Toby has had some real horrors happen in his life at the hands of Ali and the girls, and in a way, he's the only one with a real motive for revenge. Needless to say, his proximity to the girls via his relationship with Spencer and his access to the police would make him a very formidable opponent. Here are all the ways PLL would change if Toby is Big A:

Spencer Would Be Irreparably Crushed

This goes without saying, but I'm gonna say it anyway. Spencer all but snapped when she thought she found Toby's dead body in the woods back in Season 3 — can you imagine how she'd react if she found out that Toby really was the one who was totaling her life all this time? There's no coming back from that.

We'd Officially Be Unable To Trust The Police

I mean, it's not like this would be a shocking fallout, given the corrupt officers of seasons past, but if Officer Toby is Big A, then we really can't believe anything that any officer says. What if he has the entire force working for A as hi little minions? This could enter some seriously complicated territory about police corruption that PLL writers might not want to touch, but it would definitely add an interesting dynamic to the show.

We'll Have To Revisit The Jenna Thing

Let's all just be honest here: We all thought Toby was A for pretty much the entirety of Season 1. He had a good enough reason, as reasons for murder go, I suppose. After all, Ali was responsible for blinding his sister, and then Ali chose to blackmail him with her knowledge of his and Jenna's, let's say heated, relationship. If Toby ends up being Big A, there's no way the Jenna Thing doesn't come back into play. Maybe there are some things that happened that we don't know about? Maybe Jenna is red coat? This could go so many ways.

Radley Is Going To Be Back In A Big Way

If Toby is A, then Radley has to have some impact on his motives. After all, his mother was a patient there before she committed suicide (or so we're led to believe) on the premises. I have to believe that, if Toby really is Big A, that he's not doing it to torture the girls. Rather, he's doing it to find out how and why his mother died. Keegan Allen told Bustle that the Big A reveal will be "heartbreakingly beautiful"; completely devoting his life to avenging his mother's death seems pretty heartbreaking and somewhat beautiful to me. Oh, and on a related note, this tweet from Marlene King proves a rather interesting read:

That Tattoo Will Become Important Again

This tattoo hasn't really been mentioned in a while, but it was pretty significant both times it was brought up. The first time, the girls thought it could represent the day he got out of jail or the day he ended his relationship with Jenna. The second time, it was what Spencer used to determine that it was his body she found in the woods (though that was obviously a bait-and-switch). Maybe it really means something different. Something A-related.

And So Will Toby's Family History

We'd have to dive way into Toby's back story if Toby really is Big A. In this case, it might not be enough to just justify the reveal with what we already know about him vis a vis his mother and his history with Ali and the girls. We don't know all the much about Toby's father — could he have something to do with the DiLaurentis'? Could he possibly be related to Ali? We'd be forced to open a SERIOUS can of worms.

We'll Have To Deal With A Lot More Jenna

Something was clearly going on with Jenna the last time we saw her. I mean, why else would she have her little minion Sydney going all around town? That plot point ended pretty abruptly, didn't it? Almost around the time that Toby started making his serious transition into becoming an officer. If Toby is Big A, Jenna is going to know a lot more than she's been letting on.

More like this
Everything To Know About The 'Pretty Little Liars' Reboot On HBO Max
By Mary Kate McGrath and Jack Irvin
'The Summer I Turned Pretty' Using “Cruel Summer” Has Twitter Begging Taylor Swift To Release A Music Video
By Radhika Menon
'The Summer I Turned Pretty' Book Ending Is An Emotional Rollercoaster
By K.W. Colyard
'Stranger Things' Star Joe Keery Ditches The Upside-Down With New Single "Change"
By Radhika Menon
Get Even More From Bustle — Sign Up For The Newsletter