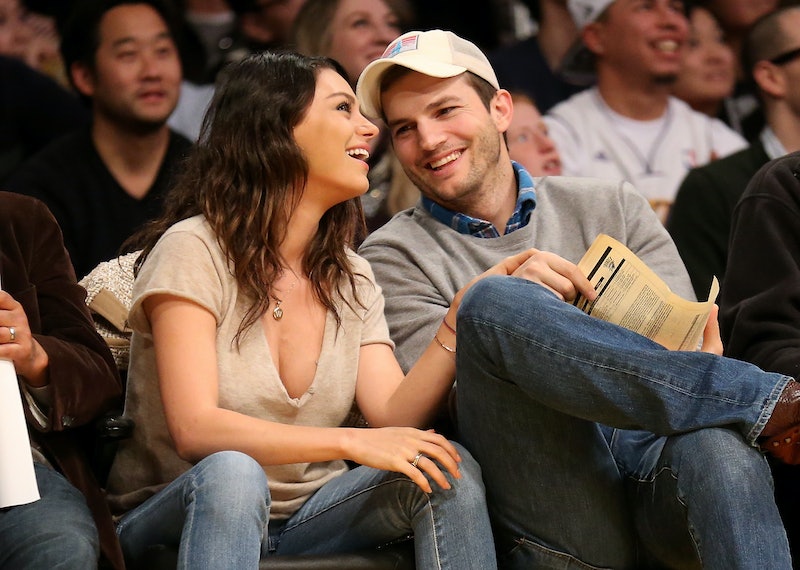 Are they or aren't they? This is the question we continue to ask regarding the marital status of Mila Kunis and Ashton Kutcher. On Monday, it seemed obvious that Kunis and Kutcher got married based on an interview the actress had with James Corden. Now, Us Weekly is reporting that Kunis and Kutcher are not married. Stop confusing me, you damn news reports and secret sources who want all us to believe one thing over another. I can't keep up with it all! How about you?

Even though the Daily Mirror reports that Kunis confirmed her marriage news to James Corden on The Late Late Show on CBS, a source told Us Weekly that Kunis and Corden were joking about tying the knot with Kutcher. Apparently, Corden inquired about Kunis' ring on her left ring finger and he reportedly said, "They are married, look." None of this has officially been confirmed or denied, but you can make your own guess based on the video of Kunis on Corden's show below.

With that said, you can't help but wonder if the former That '70s Show co-stars are truly married. Ever since they gave birth to daughter Wyatt, fans and shippers of the couple have hoped they did (or at least will) get married. Well, we'll never know until these two reveal it themselves. Even though they remain mum and never give a definitive answer, Kunis and Kutcher sure act like they're married. Who's with me? Here are a few times their actions have given us all the inclination that they are indeed married.

They Got Engaged... Have You Seen The Ring?

In February 2014, Us Weekly confirmed via an anonymous source that Kunis and Kutcher got engaged. The actress later confirmed the engagement and told Marie Claire, "The best day of my life so far was the proposal. I cried. I was a mess. Not to discredit any relationships in my past, but this relationship is different." Also, who could miss that big rock on her finger?

Mila's Played Coy On More Than One Occasion

From "joking" around with James Corden to playing coy with Ellen DeGeneres, on more than one occasion Kunis has been caught trying to avoid the conversation. Her explanations have, at times, seemed forced and appear to be a cover-up for the fact that the two have made things official.

For New Year's, Kutcher posted this photo reading: "Happy New Year. Love, The Kutchers." I think this picture says it all, right?

This brings us back to the beginning: are they or aren't they? Let's face it, Kunis and Kutcher are super private people. We will only ever know that they are indeed husband and wife when it comes out of their mouths loud and clear. Until then, well, let the speculation continue.