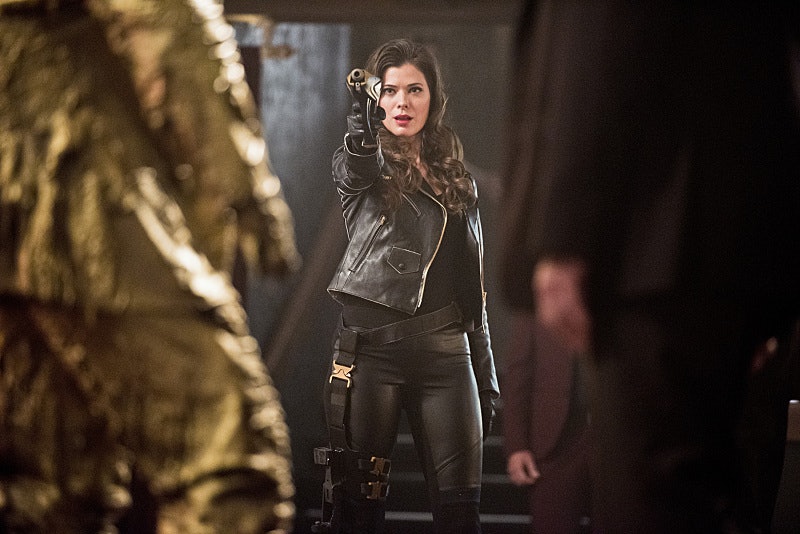 When Leonard Snart returns to The Flash, he'll have his sister Lisa in tow. She was first teased a handful of episodes ago, as the person behind Leonard and Mick Rory's escape from prison transport. We always knew Captain Cold would be back, and now we've got the Golden Glider too. As for this brand new character, who plays Lisa Snart on The Flash? When we first see her arrive in Starling City, she might look vaguely familiar. You're more than likely come across the actress who plays Lisa, Peyton List, before. But you should know: there are two different Peyton Lists out there in the world. I am not talking about the Peyton List who is on Disney Channel's Jessie and has been in the Diary of a Wimpy Kid movies. Nope, this is the older, brunette Peyton List and she's been in all your favorite TV shows (not that Jessie couldn't be your favorite show, too).

This Peyton List has been in shows like Mad Men, The Tomorrow People, and FlashForward. No offense to the other Peyton List, but I think prefer the new Flash star's projects. Here's a rundown of some of the best things she's done so far.

As a huge Mad Men junkie, I immediately recognize List as Roger Sterling's second wife, Jane. You know, the firm's secretary Jane who then wound up marrying that silver fox. She's been on and off the show since 2008.

In the "Brilliant, But Canceled" category we have The CW's The Tomorrow People, which was taken from us too soon. List had one of the lead roles, playing Cara Coburn through its first and only season.

Am I the only one who really enjoyed ABC's second go at creating another Lost? Probably. But List played Nicole Kirby, a college student, who saw herself drowning in her "flashforward" and then tried to alter her fate to not die.

The plot of the canceled Big Shots doesn't even matter, because it had Michael Vartan and Dylan McDermott and Joshua Malina in it. Yet somehow, it was canceled. It lasted for 11 episodes, and List played McDermott's character's daughter.

Way before List got into acting, she began modeling (even appearing on the cover of Girl's Life, so we all probably saw her when we were like, 11) and also studied ballet at the School of American Ballet in New York City. Maybe we'll get to see her put some of those ballet skills to use when she makes her debut as Lisa, aka Golden Glider, on The Flash.