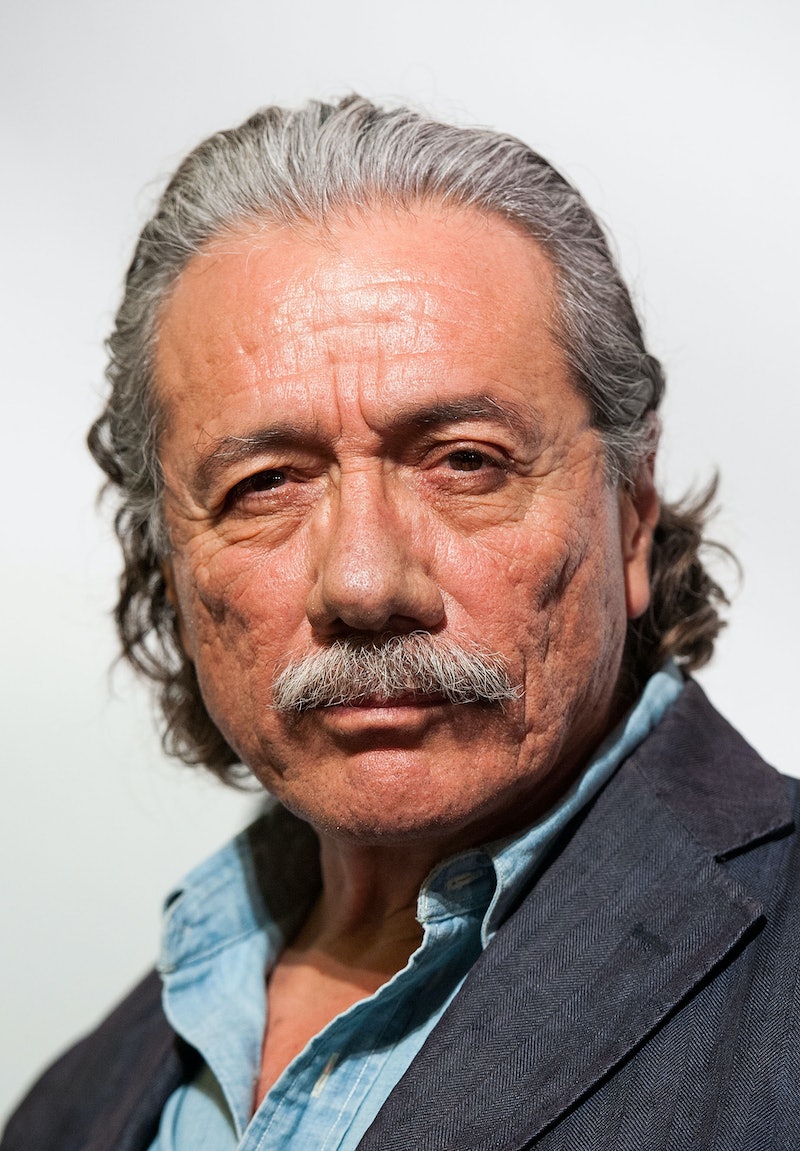 It's always a cause for celebration when nerd worlds collide and the Marvel Cinematic Universe consistently delivers on that front. This Tuesday, Battlestar Galactica's Edward James Olmos will join Agents of S.H.I.E.L.D. as Robert Gonzales. Who is he? This season, we've seen guest appearances from Inhumans, Kree, unidentified gifteds, and Asgardians. However, it appears that Olmos' character is human and heads the "real S.H.I.E.L.D." that Bobbi and Mack are working for, rather than Coulson's. ShieldTV speculated that the stars on their swanky new logo, after going through a Mockingjay-esque transformation, could mean that Captain Steve Rogers is leading this faction. I've given up hope that Chris Evans will be on my television screen, but that is a pretty cool and highly likely theory.

It seems logical that many S.H.I.E.L.D. factions split off and formed their own divisions after Hydra tore the organization apart. It was a complicated time, most channels of communication could not be trusted, and S.H.I.E.L.D. has a global presence. Olmos is the kind of guy that I'd vote for and follow into battle based on his presence alone. He just exudes power and leadership. It makes sense that he would play this kind of character on Agents of S.H.I.E.L.D. Why do I think that Gonzales is in this leadership role? Check out the promo for Tuesday's episode "Love in the Time of Hydra." Thanks to the magic of editing, I think his role is pretty heavily implied, and Comicbook.com agrees.

I've said it before and I'll say it again — Phil Coulson may walk this earth as casually as a clam, but the Avengers still don't know that he's alive. In fact, Nick Fury is presumed dead by most folks as well. S.H.I.E.L.D. loves secrets, but I don't think Captain America, Black Widow, and Hawkeye (I'll never forget you, Hawkeye) would stand for working under not one but two unidentified bosses. According to the official ABC press release for "Love In The Time Of Hydra," Agent Weaver from the S.H.I.E.L.D. Academy will be in the episode as well. She's trustworthy. I don't think this S.H.I.E.L.D. is evil. It's just different.

It would be cool if Coulson and Gonzales could reconcile and merge their branches of S.H.I.E.L.D. once they "discover" each other. Somehow, I think a certain quaking S.H.I.E.L.D. Agent is going to be what causes conflict between the groups. Civil War is coming, and the treatment of superpowered individuals is a big part of how that is going to shake down.

It is also worth noting that there is a Gonzales family in Marvel comic books. Vin Gonzales is a police officer who is at odds with Spider-Man. He believes the webslinger to be a criminal. His sister Michele Gonzales dated Peter Parker for a short period while Vincent was in jail. Now, I don't necessarily think that this character and Robert Gonzales are one and the same. However, if anyone in the Agents of S.H.I.E.L.D. cast was going to cross over into movies, he would be on my list.

The Marvel Cinematic Universe is going to have to start bringing Spider-Man in eventually. While I'm willing to bet that our first bit of information about him will come at the end of the credits sequence in Avengers: Age of Ultron, what if Robert Gonzales crossed over to his story? What if "the real S.H.I.E.L.D." is trying to hunt Parker down? What if Robert has a son named Vincent whose roommate (the adversaries lived together in the comics too) has an unexplained arachnophilia? That would be a really cool way to bring him into the MCU, and Agents of S.H.I.E.L.D. is the best way to make it happen.