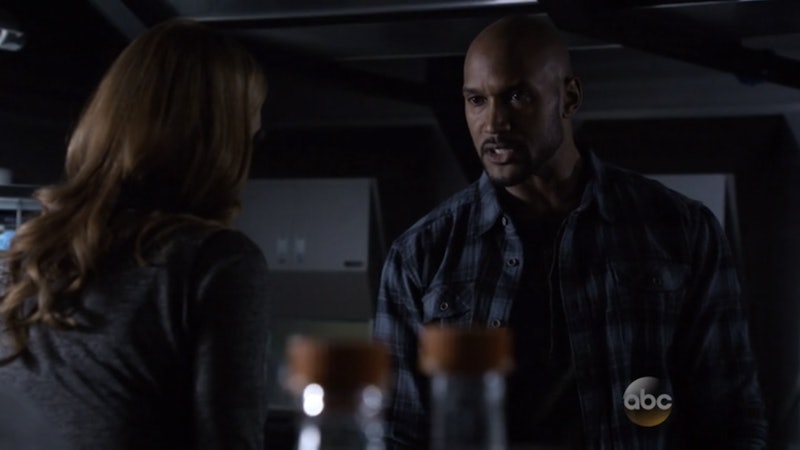 Since before its winter hiatus, Agents of S.H.I.E.L.D. has been dropping hints about Mack and Bobbi’s secret side project. It’s a mystery in line with the rest the show has thrown at us so far. We’re talking global secret organizations here; it’s no surprise that much of the show’s action revolves around one question: Who’s working for who? In this case, the answer may be that Mack and Bobbi are working for S.W.O.R.D.

The Marvel universe provides a lot of possible answers, making it all the easier for us to wildly speculate. We know that the Coulson-led rogue S.H.I.E.L.D. isn’t the only game in town. We also know that goodies and baddies are not so cleanly divided. There are organizations at odds with Team Coulson, who don’t necessarily consider themselves remorseless murderers. In Joss Whedon’s Agents of S.H.I.E.L.D. comics, that list includes the Sentient World Observation and Response Department, or S.W.O.R.D. (Killing us with these acronyms, Whedon.) S.W.O.R.D. has a mission to identify and neutralize extraterrestrial threats to our planet (think an American Torchwood ); it’s a purpose that a couple of agents might see as ranking a little higher in importance than covering things back at home. (Aliens > everything.)

My theory is that Bobbi and Mack are working within Coulson’s team to complete missions for S.W.O.R.D. This other agency was originally conceived as a part of S.H.I.E.L.D., but has now spun-off on terms that aren’t very friendly. This would explain how the agents knew about S.W.O.R.D. in the first place, and why Mack would refer to it as “the real S.H.I.E.L.D.” It also seems likely that Agents of S.H.I.E.L.D. would choose to dig in to an agency originally devised by Joss Whedon himself; why not develop the seeds he planted in the comics?

Based on the episode promo above, it seems that S.W.O.R.D. might be headed up by Edward James Olmos’ character, identified as Robert Gonzales. In an interview with Comic Book Resources, Olmos had a grand old time messing with fans. “Well, I'll just put it to you this way: When he smiles, the whole world smiles with him,” Olmos said. The whole world, huh? Sounds like the head of a global counterterrorism unit to me.

Whatever Bobbi and Mack have up their sleeves, it’s bound to shake up the team like it already shook up Bobbi and Lance’s tentative reconciliation. Love hurts — especially when it gets in the way of saving the world.