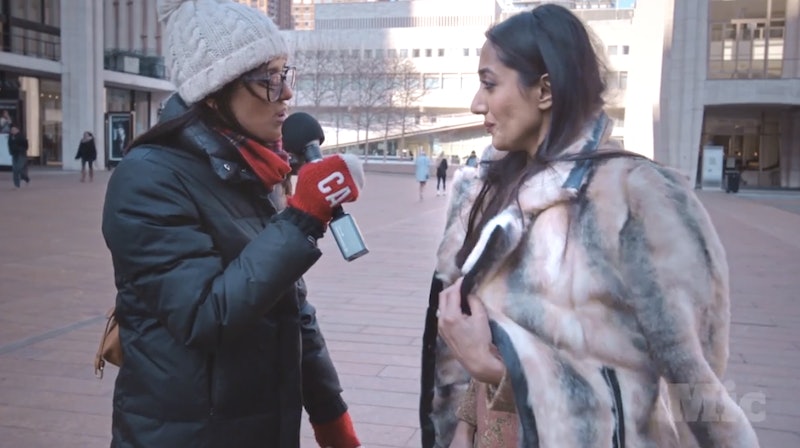 Diversity in the fashion industry has been a hot topic as of late, with praise for this year's slightly more inclusive set of runway models at NYFW piggybacking on claims that the industry hasn't made much progress in their effort to showcase models of color across the board. But this awesome video from news site Mic, which is equal parts snarky and informative, proves that fashion hasn't yet solved its diversity problem.

Despite the how many strides the industry has taken in terms of featuring catwalkers of color and models with disabilities in recent runway shows, journalist Liz Plank from the Mic's new video series, Flip the Script, proves the fashion community just isn't there yet (although things are slightly better than they were before).

The video shows Plank journalist and black model Yomi Abiola counting the number of white women vs. models of color in an issue of Vanity Fair (94 to an abysmal 13 and a half) and highlights diversity advocate/model Bethann Hardison's 2013 open letter calling out colorless fashion houses by name in an effort to explore the industry's distinct lack of diversity across the board. Spoiler Alert: things haven't changed much in the past twenty years.

"[When] I saw Naomi Campbell on television, I was mesmerized," remembers Abiola. "But I want every single woman to be able to have that experience of having your beauty - but beyond your beauty - what you look like, validated. You exist and you're seen, and you're part of society. It's time to wake up."

Calling out offenders by name seems to provide a desperately needed wake up call. Flip the Script notes that the industry does tend to improve when they're being held accountable for their problematic practices.

After Bethann Hardison named specific designers who included zero to one woman of color in their recent runway shows, the diversity of the models in those particular fashion houses increased by a whopping 347%. Though the industry is far being colorblind, it seems that the secret weapon is refusing to become complacent.

Some other people that could benefit from a wake up call? These street style fashionistas who Plank caught up with during NYFW.

"Oh, we're definitely seeing a whole lot of diversity in terms of clothes!"

"We had one Asian, one red hair, colored, blonde. We had all of them!"

Liz: "Are you excited that there's no more racism in the fashion industry?"