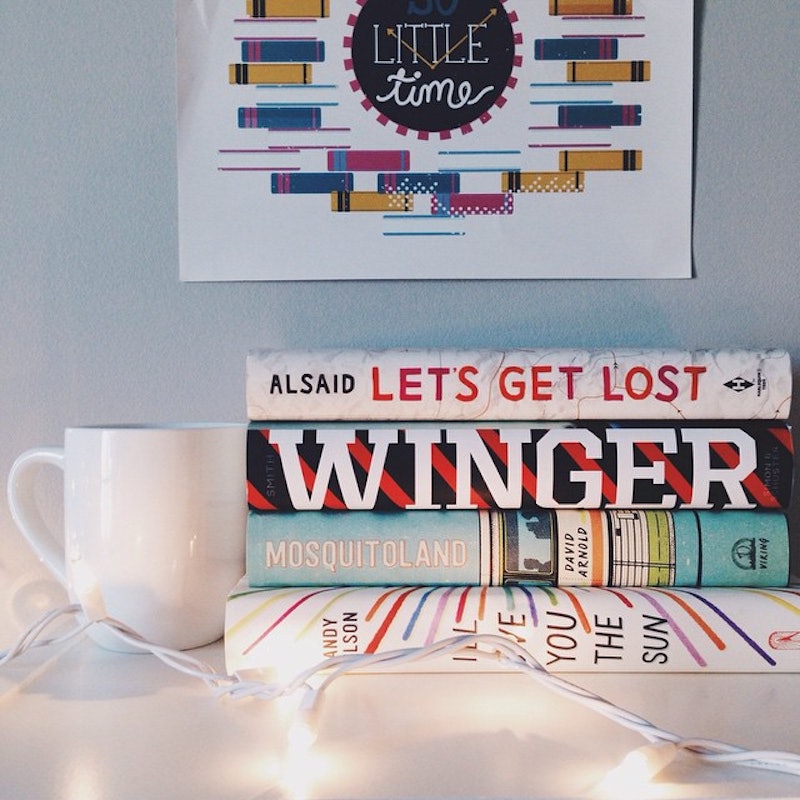 When the warm weather rolls around, spring cleaning is as much of a mental exercise as it is a chance to remove any physical clutter from your life. It's a season to donate the crap you never use, and make room for more crap you'll probably never use. More importantly, it's about shedding the excess stuff that you don't think you'll ever truly need. It's a healthy activity and something in which all of us should partake.

The flipside is making sure you don't get rid of the wrong things. You don't ever want to look at that empty space on your shelf with longing and regret. For instance, one year during high school I eyed my entire collection of Goosebumps books and thought, I'm too old for these and will never want to read them again. Time to toss. And you know what? I did. And I wish I hadn't because they were a major part of my childhood and I still have a major soft spot for all of those fictional ghosts and goblins. They made a very uncool bookworm child feel like less of an outcast and for that, I will be forever grateful.

So to keep you from making any massive errors in judgement when evaluating the books section of your house during spring cleaning, here are all the books you should definitely put in the "Keeper" pile.

1. The One That Left You With a Severe Emotional Hangover

You know the one. It took days (maybe even weeks) to get over and you're certain you couldn't go through that roller coaster of feels ever again. But a book that made such an impact on your life should not only be kept, it should be re-read... the next time you're in need of a good cry.

2. That YA Novel You Read in One Sitting

It was so thrilling that you couldn't put it down. You devoured it all in one day and don't even remember eating or taking bathroom breaks. Because you read it so quickly, there are probably TONS of little nuggets you missed. Jack's right, it's time to go back.

3. The Classic Everyone Has Read (But You)

You've made your peace with being one of the only people who hasn't read it and you don't even care anymore. So who needs it? Well, someday you might. Don't give up on it just yet. It's a classic for a reason.

4. The One Recommended By Your Ex

You hate your ex and want to get rid of Every. Last. Memento. I totally get it. But don't let him or her ruin a perfectly good fictional adventure for you. You might end up loving it even more than you ever loved him.

5. The One You've Seen the Movie Version of, But Haven't Yet Read

Accurate book-to-film adaptations don't come around often... which is a kinder way of saying that the book is almost ALWAYS better than the movie. This one probably is, too.

6. The 5-Year-Old Bestseller That You Had No Time to Read When it Was Popular

It was all anyone talked about in 2010, and you were left out of all those timely references thinking that you would read it soon. You still haven't, but this could be the year that happens. Plus, even if a movie was made at the time, it's probably almost time for a reboot anyway so....

7. The One You Were Supposed to Have Read in High School, But Didn't... Until Now

You didn't read Hamlet back then because you were too busy making out with that hottie after the soccer game. But then it shows up in present day as a parallel to a show like Sons of Anarchy and you don't understand the comparisons. NOW IS THE TIME.

8. That Old Fad Diet Book That Makes No Sense Today

Any fad diet is probably a bad idea because the only reason they become a "fad" is because they are extreme. So when health standards are updated via science and the world discovers just how ridiculous a current fad diet is, then the book recommending such a radical change in lifestyle becomes a hilarious relic. Keep.

9. The Cheesy Romance Novel with All the Sexiness

You publicly pretend you hated it or maybe that you didn't read it at all. But privately, you thoroughly enjoyed all the sex and the super cheeseball dialogue was kinda funny. Well, the world doesn't need to see your personal book collection, so save this sexy book for a rainy day.

10. The Self-Help Book That Got You Through Your Last Rough Patch

Even if you've moved on from whatever it is, you will forever appreciate the wisdom this self-help book provided. And don't get it twisted, life is full of obstacles, so you might need this book again one day.

11. The Book That Changed Your Perspective on Something

Knowledge is power and the act of reading a book can only expand your already spectacular mind. If there's a book that drastically changed your stance on something, cherish that book for all eternity, because the author is amazing and this is a rare experience.