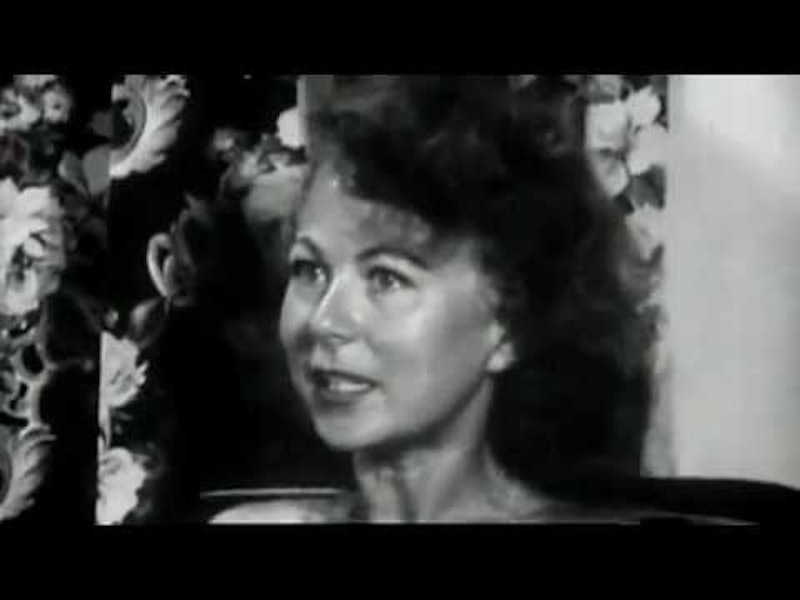 Ever wonder what June Cleaver would look like on acid? Wonder no more, friends. Don Lattin, an author writing on Aldous Huxley and other prominent thinkers on the effects of hallucinogenics in the 1950s and 60s, stumbled upon something surprising during his research: video of a 1950s housewife high on LSD. The footage, dating from 1956, shows Dr. Sidney Cohen, an expert in LSD and other mood altering substances, administering LSD to a young housewife. Three hours later, she appears to be, as the cool kids say, tripping balls.

At the beginning of the clip, Cohen assures viewers that his subject is “normal”: a series of tests have shown that she is a “stable and well balanced person.” He has her take a tiny amount of LSD, odorless and colorless, with a glass of water. According to Psychology Today, common side effects of LSD (lysergic acid diethylamide) include intensified perceptions of colors, sounds, odors, and other sensations, as well as synesthesia (the feeling that senses have crossed, allowing one to “touch sounds” or “hear images”).

The test subject clearly experiences altered perceptions. When Cohen asks her to explain what she’s seeing, she replies,

I just couldn’t. I couldn’t possibly tell you. It’s here, can’t you feel it? This whole room, everything is in color, and I can feel the air, I can see it, I can see all the molecules… I’m part of it, I’m… can’t you see it? [I’m trying] Oh, it’s just like you’re released or you’re free or… I don’t know how I can tell you.

When asked, “How do you feel inside?”, she rejects the interior/exterior duality:

While “bad trips” — characterized by paranoia and fear — can certainly occur, this woman’s experience seems to be overwhelmingly positive, even transformative. When Cohen asks her whether what she’s experiencing is pleasant or unpleasant, she seems affronted by the question, saying,

Later, she remarks, “I wish I could talk in Technicolor, or […] I can’t tell you about it; if you can’t see it, then you’ll just never know it. I feel sorry for you.”

LSD has been classified as a “Schedule I” controlled substance since the Controlled Substances Act of 1970 was passed, effectively banning the use of the drug in laboratory and experimental settings. In recent years, researchers have been campaigning to put an end to the ban on LSD and other mood-altering drugs, arguing that these substances could potentially be used to treat a variety of mental disorders, including depression, anxiety, post-traumatic stress disorder, and obsessive compulsive disorder.

Watch the whole thing below.