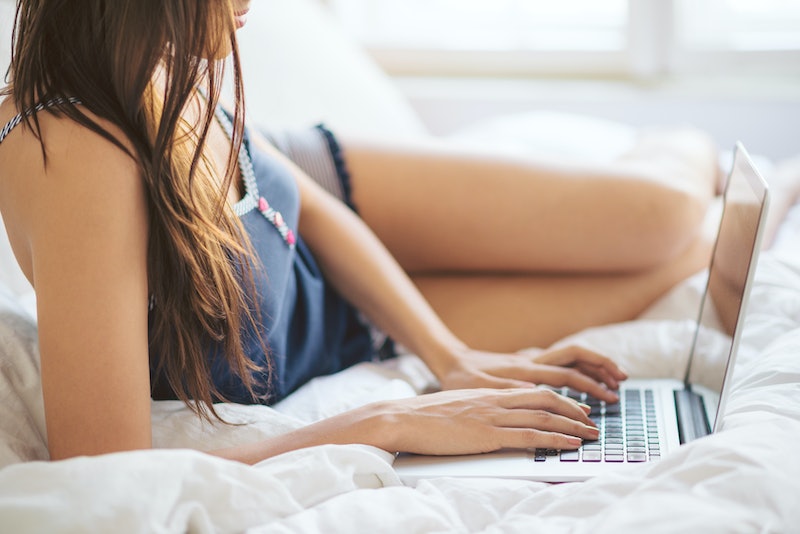 In this cyberstalk-able age, I don't Google stalk my dates in advance. Whether I met the guy through friends, at a party, or online, I prefer getting to know him as the actual person sitting across from me versus whom I read about on my laptop via an Internet search. Conversely, I want him to get to know me the same way — authentically.

You may remember the How I Met Your Mother episode, “Mystery vs. History,” where Ted meets a woman in a bar, Janet, asks her out, and decides not to Google her before their date. After all, his parents didn’t do so back in the day, he says. He asks her to do the same and she agrees. We learn that, in the past, Barney and Robin would research Ted’s dates and dig up undesirable characteristics of theirs. (Barney even called the background checks “standard operating procedure.”) This would sabotage Ted’s opinions of the women and then he couldn't give them a real chance.

On the date, Ted loses his ability to make conversation with Janet, believing it’s because he didn’t Google her, which he thinks would have helped direct their discussion. When she’s in the bathroom, he looks at a link his friends sent him and gets super overwhelmed — Janet graduated Princeton at 15, donated a kidney, climbed Mount Everest, etc. She returns, Ted's demeanor changes, and he reveals the things he now knows about her. She sees how intimidated he is, mentions how this happens with men a lot, and the date derails.

I’m with Ted and prefer the mystery over history. If you want to try it, too, here’s how.

1. Create a dating name — and don’t give someone your last name or real email address.

Even if you resist Googling them, once they have your last name, they can still Google you and the date will be lopsided in who knows what about the other person. To be the most natural getting-to-know-each-other experience, like Ted taught us, neither of you should do pre-date “research.” Also, if you met the person online and have decided to start emailing each other offline through your Gmail or Yahoo account instead, create another email account with a fake name (a variation of your first name, your middle name, or your favorite name) and an initial or a common name (like Jones or Smith) as your dating last name. (This also comes in handy in case the guy becomes a stalker, which is no fun at all and for another article. Let’s just say it’s amazing how much someone can learn about you through knowing your last name.)

2. Use a pseudonym if you have a common first name.

Maybe your name is not too common, so even if you sign your Match or OkCupid emails with only your first name, the person can still find you on the Internet. When online dating, I don’t use my “real” name until I meet the person in person and use a variation of it when signing emails, or I sign emails as my username.

For instance, if you Google me and just type in “Natalia Los Angeles” I appear on the first page, toward the bottom (the 10th search item that comes up as of the publication date of this article). If you type in “Natalia writer Los Angeles” I appear in the middle of the first page (the fifth search item). Of course, there is only one “Natalia Lusinski” when you look in Google (except for my niece, who doesn’t come up), so lots and lots of things come up immediately, both writing-related and not. All benign (I think).

3. Google yourself as a test of what someone will find.

It didn’t occur to me to do this until a friend Googled me and said, “I didn’t know you were on Blind Date!” And, I didn’t know that that was on my IMDB page and also comes up when you Google me. So, as an experiment, Google yourself and see what appears in the first few pages.

Let’s say you do know your date’s last name (or maybe just the first not-too-common one, like mine).

Here are 4 reasons NOT to Google your date:

1. Your conversation won’t be as natural.

Sure, some would say pre-date research could become conversation topics for the date, but then where’s the element of surprise and spontaneity? After all, like Ted said, his parents didn’t do online investigating before their first date, so why should we? The more we date the person, the more we’ll learn all the Google-able things, anyway, and with even more enthusiasm, sidebars, and extra details thrown in that the computer version can't provide.

2. You judge their online persona before their in-person one (i.e., something iffy that you find online could have been way in the past).

Yes, you may think Googling will help see if your date is crazy, has an arrest record, or is wanted for a crime, but the chance of this is minuscule. Maybe you discover that they never graduated high school or didn’t go to college. But would you have been able to tell that just by talking to them or by the type of job they have now? Maybe he or she got a DUI. But, maybe they also learned their lesson by paying all the fines and going to AA. Finding these things out online may make you dismiss the person before you even give them a chance. And you don’t want to be judged for your past, do you?

3. You uncover so much, you fall in love with the fantasy of the person, not the reality (and seeing, IRL, is believing).

A friend of mine, "Tracy," once stayed up all night Google-stalking a guy she was messaging online. She found several pictures of him cycling competitively and participating in various charity marathons all over the country. Instead of being intimidated like Ted in our example above, Tracy envisioned weekends of bike riding, training for marathons, and traveling with him. She planned their whole future before they even met! (I'm sure you know people who have done the same — I think we all have.) And guess what? In "real" life, he tore his Achilles tendon and no longer rode and barely traveled. So, sometimes online advertising is false advertising.

You won’t have to fake reactions to things you already know from stalking. The guy or girl sitting across from you can genuinely respond to things you reveal about yourself, and vice-versa. They'll fall in love with the three-dimensional you, not your online persona.