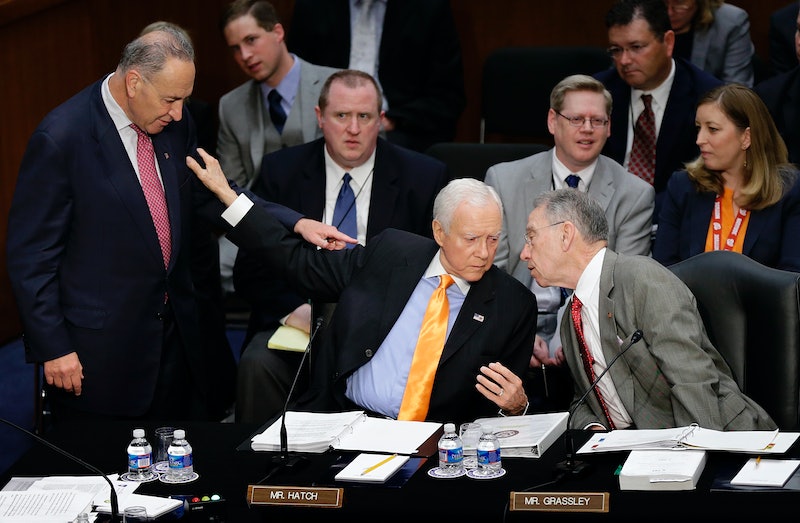 As the Senate adapts its dramatic immigration bill to include severe border-strengthening measures Thursday, many House Republicans continue to blast reform regardless. The game-changing "Gang of Eight" bill, which would probably reduce the deficit by millions, all seems a bit much to some Republicans: “We don’t do big things very well around here,” as Mike Kelly (R-PA) put it. Yeah, you're only THE GOVERNMENT.

The Senate's reported add-on to the bill—which would, in an effort to pacify the Republican House, double Border Patrol security and construct hundreds of miles of fence—would add tens of millions of dollars to the gargantuan reform. As the Senate reportedly closes in on the deal, Senator Chuck Schumer (D-NY) hinted that the reform had been met with approval by the opposing party, saying discussions "have been really productive," and that "we've made a lot of progress in the last 24 hours."

The bill is expected to pass next week, just in time for the Fourth of July recess. Proponents of the bill are hoping for a thumbs-up from the majority of the Senate: if at least 70 members of the 100-strong Senate approve the bill, the 234 Republicans that make up the brunt of the House Of Representatives will be less able to stand in its way.

And stand in its way they will—as they are already. "Mother always told me that if 70 people jump off a cliff, you shouldn't follow them," Rep. Tom McClintock (R-Calif) Forrest-Gump-idly recalled. Even the Congressional Budget Office's estimates that the bill would likely reduce the deficit by $700 billion in a decade hasn't halted the bill-blasting: "It's not a rational study," insisted Rep. Mo Brooks (R-AL) calling it a haze of "smoke and mirrors."

Some Republicans have charged that the measure would hurt the U.S. job market (the CBO study concluded that unemployment would briefly rise) and bruise the economy. (The economy, the CBO also noted, would benefit from the taxes paid by now-undocumented citizens; and GDP would be boosted by about five percent over the next decade.)