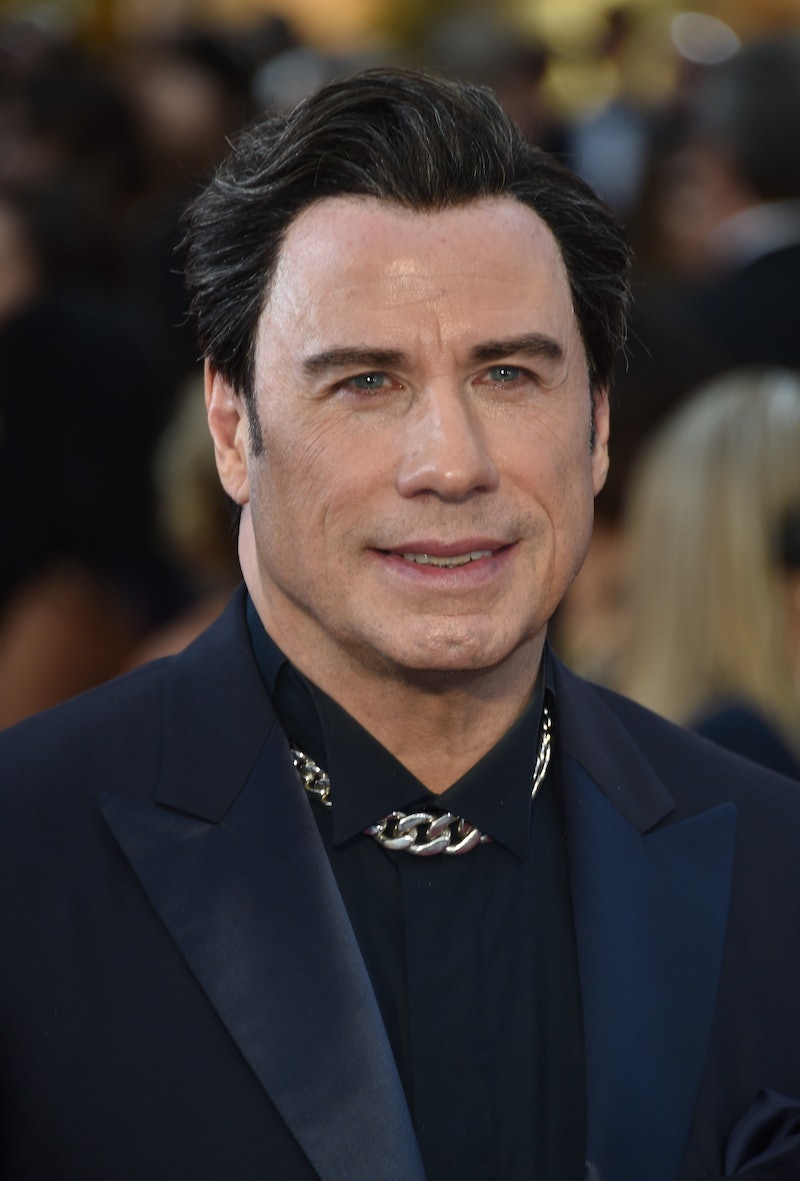 There are a lot of questions about the "behind-the-curtain" ideas of Scientology, which the HBO documentary Going Clear will address. Another topic of conversation in the film is the Church's interactions with celebrities. One famous Scientologist, John Travolta, will be focused on in the documentary. The documentary alludes to the fact that the Church of Scientology allegedly has dirt on John Travolta, through talk therapy sessions called audits, that allegedly allowed the church to have a control over Travolta from straying too much from the church. So has Travolta spoken out on Scientology before, and if he has, what has he said? UPDATE: The Church of Scientology has reached out to Bustle, stating: "The accusations made in the film are entirely false and alleged without ever asking the Church."

In the documentary, an interview with Travolta, from a movie set, is featured, showing Travolta talking about how Scientology is inspiring and how it helps the world. That's not the only time that Travolta has mentioned his thoughts on his church, in fact, he has been quite talkative about Scientology in the past. Going Clear is sure to raise some eyebrows about Travolta's participation with the religion, which will probably lead people asking about his viewpoints. Here are some times that Travolta has spoken out on the subject of Scientology, his beliefs within the church, and what the religion brings to the world, so let's piece together what exactly he thinks of it.

On Staying Positive, And Being A Catholic Before A Scientologist

Being Positive: "My religion has helped me, tremendously, keep positive. Because they’ve helped me combat the pressure of being famous..."

Scientology vs. Catholicism: "Scientology is a workable technology as well. You have tools to actually use in life, for life, and they’re designed for every aspect of life. So it’s much different, there’s actually things you can use."

On Why People Are Freaked Out By Scientology

On The Church After Losing His Son Jett Travolta

Providing Support: "Our Church has helped us tremendously. We’re in a special program designed for loss. We’ve been helped tremendous amount."

On Being A Healer

Being A Healer: "I’m not really a healer, I just have some techniques that I’ve borrowed from Scientology, that quickens healing. Meaning like, if you weren’t feeling well, maybe I could help you get better quicker. It’s no talent of mine, it’s something I study and learn, and you could study and learn it too. If you were feeling under the weather, I could probably do a few things to help you out."