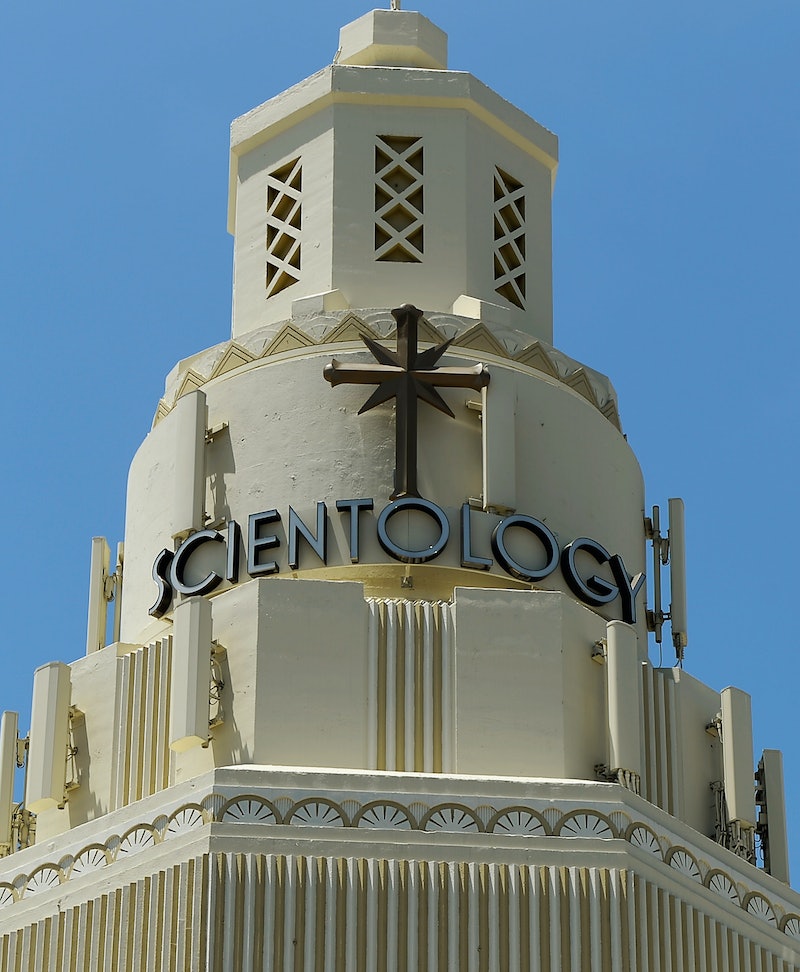 If the new HBO Scientology documentary Going Clear is to be believed, the Church of Scientology is not just shady, it also allegedly keeps people held captive under inhumane conditions — in other words, it's allegedly made several human rights violations. In the documentary, former Scientologists discuss things that they say happened to them while in the church, including several who describe being sent to live in de facto prisons, supposedly "for their own good."

One woman says she had to work manual labor jobs for 30 hours at a time and then was allowed only three hours of sleep. Several former high level Scientologists claim they were kept in "The Hole," two ant-infested trailers with a guard outside, where they say they were routinely mistreated. The Church of Scientology, for its part, released the following statement about Going Clear and its claims:

Though there is no hard evidence to definitively prove these claims, the accusations are disturbing. If they are true, however, it wouldn't be the first time people used religion to justify human rights abuses. In fact, just about every religion in the world probably has at least one shameful episode in its history of people using their religion to justify doing terrible things to other people — and of religious leaders using their power and position to harm their own followers (though being common obviously does not make it OK). Here are just a few examples from the world's four largest religions.

There have been numerous groups that have used Christianity to justify atrocities, from the Spanish Inquisition to European colonization of the Americas to the Nazis to the modern Catholic Church's protection of pedophile priests. But perhaps one of the most familiar examples are the witch trials in Salem, Massachusetts in 1692, when town leaders — including religious officials — declared numerous members of the community to be witches. Twenty were executed, and several others died while in prison, including one infant. While today it's seen as a monstrous abuse of power and an example of mass hysteria, the men in charge at the time thought they were protecting their faith and their community.

Much like Christianity, people have used Islam to justify terrible things — just look at the Taliban as a case in point. But also like in Christianity's case, the phenomenon is not a modern one. Although Islam has always been tolerant of other "people of the book," Muslims who expressed ideas perceived as heretical have not always been so well treated. For instance, in 922 the Sufi mystic Mansur al-Hallaj was executed for declaring "I am the Truth," which was considered by mainstream Muslims at the time to be a claim to divinity and resulted in his conviction and execution for heresy.

Although the Hindu caste system is no longer written into the legal code, and although conditions for the lowest caste, known as "untouchables," has been improving somewhat over the years, many inhumane conditions still persist, including those that are explicitly forbidden under modern law. And members of the community still face violence and discrimination, including police brutality.

Unlike many other major religions, Buddhism has historically been a peaceful faith, one that does not drive its members to violence. However, in recent years, some Buddhist monks in Burma have participated in — and even encouraged — violence by the Buddhist majority against the Muslim minority. It seems that not even Buddhists are immune to getting caught up in politics or from using religion (or religious identity) to justify violence.

It is worth pointing out that abuses of power are everywhere, and have been throughout all of history. And human rights violations by various religions are not what you'd call new.