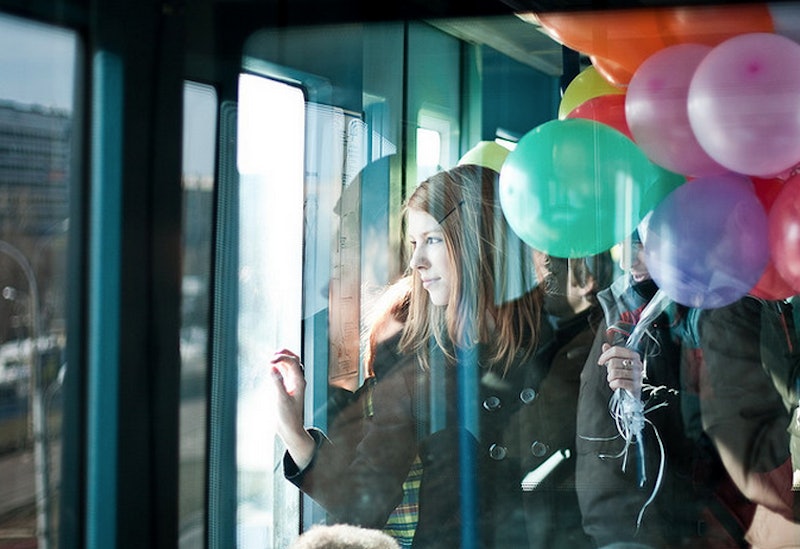 There's a Kimmy Schmidt in every friend group, and in my friend group, it happens to be me. I wake up early and I wake up happy. I love smack-you-in-the-face, bright, happy colors and making friends with babies in elevators. I like laughing and aggressively sharing funny links with friends and foot-tapping to the absurdly happy American Authors songs that are blasting in my headphones more often than not. I've always been an optimist, and I don't have a problem with who I am. That being said, I do have a little bit of a problem with people who misinterpret my attitude or make assumptions about me that aren't true.

Somewhere down the line, being an optimist became unfashionable (I blame Grumpy Cat). I remember as early as fifth grade, people would get annoyed with me for being "too happy," and by junior high, there were bullies telling everyone I was "on drugs". When I was growing up, I spent a lot of time trying to hide my enthusiasm for preeeeetty much everything, and—SURPRISE—I was super bad at it. Playing it cool was not an evolutionary skill I was ever equipped with, it seems. I've since learned to just own it, because seriously, f*ck anyone determined to bring another human being down. Still, it is a bit disappointing to get misjudged by other humans, so there are a few things I could do without hearing ever again:

"I wish my life were as easy as yours."

This is the notion that I just want to address right off the bat: Nobody's life is "easy". And optimists take all the same crap everybody else does. It's not like we live in this Oompa Loompa bubble world where nothing bad ever happens to us. We struggle for the same things, endure the same sadnesses and disappointments, and get Starburst packs mostly full of yellow ones just like the rest of the world. We just happen to deal with it differently, is all. Don't invalidate our challenges and struggles just because we've found a better approach to dealing with them. It undermines the very real strength and courage that it takes to be a happy person.

"It's just because you're so sheltered."

Every now and then I get this holier-than-thou attitude from someone who considers themselves a cynic, and I don't know why somebody would even take that tone other than to be insulting. There is no correlation between being sheltered and being an optimist. I think some people are just born predisposed to being that way, regardless of what life throws at them, and it isn't fair to diminish someone's life experience by implying that their happy attitude is a result of being limited in some way.

Again, this is mostly middle school bully talk, but also just rude on so many levels. A lot of people who are suffering from depression do rely on medication, to help an illness that they don't have the power to change. There is nothing wrong with taking drugs when it might literally be life-saving, and people who say stuff like this have zero respect for that struggle. In my case, they were just plain wrong; I don't take drugs, legal or otherwise. But how do they know that? In someone else's case, saying something like that runs the risk of shaming a person for something nobody should ever be ashamed of.

"Don't you know bad stuff happens in the world?"

YES. We are well-informed humans who watch the news and are just as horrified by what we see as everyone else. Optimism is not born out of some willful ignorance on our parts. To be honest, the world sucks sometimes. Optimists are not ignorant to all the grossness in the world—it's just that we also have some faith in the world's ability to get better.

I have literally no idea why people seem convinced that they have to break optimists like they are race horses, but it's upsetting and weird. Of course we're going to cry about something at some point (we are humans), but not in front of people who make us feel like they are deriving some bizarre smug pleasure from it.

"Of course you're this way—nothing bad has ever happened to you."

It's as simple as this: Not all optimists have had peachy keen lives, the same way not all cynics have had horrible ones. I don't think your attitude and ultimate sense of self is entirely determined by what goes on around you. Just as many "bad things" happen to optimists as they do to everyone else, but everyone has their own way of coping with them. Ours is to get excited about stupid things and celebrate tiny victories (and possibly bake too much).

Why is it that people think Zooey has some sort of trademark on happiness? I was being chipper and chubby-cheeked way before that killer set of bangs was lighting up the screen. Seriously, I don't know why we feel the need to accuse each other of copycatting when there are only so many different types of personalities that can even exist in the world. Even if we are, what's the BFD? People emulate their role models all the time. It's why good role models exist. I could be trying to imitate Darth Vader, so I mean, count your lucky stars, y'all.

Anybody who say this is, ironically, the person who needs to "grow up".

"Has anybody ever told you how annoying you are?"

WOW NO! MUCH SHOCK VERY SURPRISE nobody's EVER said that before!!!

Seriously, I get that being friends with an optimist is not for everyone, and believe me when I say we're not on some optimist mission to aggressively befriend the world (just babies, puppies, and Taylor Swift). It's totally fine if we are not your jam. Just, like...don't be an ass. It's not like we did anything wrong.

"Whoa! I never thought I'd hear you say something so dark."

I mean, I guess this is more amusing than anything, but people are always unduly shocked when sunny people turn around and tell killer dark jokes or cuss up a storm. Optimistic is not the same as innocent. Not so deep down we are having the same hilariously horrible thoughts as the rest of the human race.

"No offense, but I could never be like you."

Well, DUH. Nobody chooses to be a certain way. I didn't wake up one day all, "HEY, I think I'm going to be an optimist. Great. That's decided forever." If it were that easy then wouldn't we all just be ridiculously chipper all the time?

"It must be nice to be so happy all the time."

I think this is the misconception that bothers me the most: We're not happy "all the time." Optimists experience all the same doubt, misery, and occasional self-hatred that everybody else does. We fall down just as hard and pick ourselves up just as messily. There would be no fun in being an optimist if we didn't also have that experience in our lives to balance it out. Yes, our happiness is extreme, but it does nothing to dull out the very real emotions in the human spectrum we also feel. It is nice to be happy, but definitely not "all the time".

More like this
The 19 Best Tweets & Memes About Bisexual Awareness Week
By Lexi Inks
3 Zodiac Signs Most Likely To Be The Center Of Attention
By Nina Kahn
This Psychological Effect Might Be Keeping You From Hitting Your Goals
By Lexi Inks
The 8 Best Crystals For Confidence, According To Experts
By Megan Gray
Get Even More From Bustle — Sign Up For The Newsletter