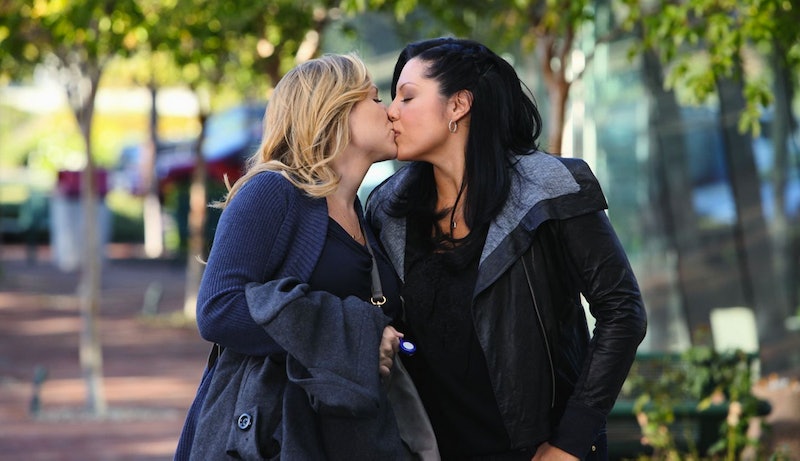 Grey's Anatomy is an interesting beast. There is no doubt that Shonda Rhimes is the reigning queen of television, or that the early mass success of Grey's Anatomy is the thing that kicked it off years before Scandal. But in a world where Scandal and How To Get Away With Murder do exist, Grey's has in many ways sidelined like a forgotten eldest sibling, mentioned more as an afterthought in thinkpieces about Shondaland's prominence than as the show that started all. And yet the show still marches on, currently airing Season 11 on ABC, with no clear end in sight. Friday is the 10th anniversary of Grey's Anatomy's first airing on television, so let's seize the occasion to talk about Shondaland's original story — because, considering Grey's Anatomy 's best plot decisions, it's no accident this series is still around.

Many shows that have the kind of intense zeitgeisty first seasons that Grey's Anatomy have don't last eleven seasons — just look at, say, Glee or The O.C., which petered out hard and (relative to Grey's Anatomy) fast despite the amount of love and attention its first seasons brought. And Grey's has not been without its own notable missteps — I personally have quit the show multiple occasions, I'd wager around the time hordes of other fans who came to the show during the heights of its buzz did. (Do I have to remind you about the ghost sex?)

Now, however, I find a more loyal viewer than ever. Grey's Anatomy won me back through a lot of trial and error, because this is a series that allows itself to evolve — and evolve it has. Through all its ups and downs, Grey's continues to be a solid character drama beneath (and sometimes — just sometimes — because of) its soapy packaging. It's also shown a resilience almost as impressive as that of its characters. So on its tenth birthday, here are some of the best decisions Grey's Anatomy ever made, all of which have contributed in some way or another to the show's longevity.

As the show's title character, Meredith Grey is inseparable from Grey's Anatomy. She set the emotional tone for a show about frequently broken people trying to forge a life for themselves despite the horrific things that have happened to them — and Meredith Grey has faced a disproportionate amount of horrific life events. The thrusting force of her romantic drama for many years (aside from that whole pesky hidden marriage thing) was the fact that Meredith was deeply petrified of the backlash that would come if she emotionally committed to the person she believed to be the love of her life. And that worked as drama for multiple seasons. But staring down the barrel of the series' success, the show had to make a choice — keep dragging along Meredith's resistance to romantic emotional intimacy, or let her dig around in herself, identify the core of the issue, and move forward. They chose the latter and sent her to therapy.

It hardly solved all of Meredith's issues (she remains human and continues to screw up from time to time), but it breathed new life into the show's main character by laying her emotional issues bare and allowing her (and us) to work through them. Her past is dark and twisty, and that will always be a part of her, but the decision to let her confront that and work to move on from it gave audiences a lot more to root for in her.

Just as change was required with Meredith, a certain consistency was required with her best friend and "person" Cristina Yang. Cristina grew throughout the years, of course, and that maturation was important. But so too was the thing that had always been true about Cristina: That she valued her career and her ambitions as a surgeon about practically all else, and that she did not want to compromise those things by having children. This provided for major conflict when she married a man who tried but couldn't let go of the vision he had for a future with kids, and their marriage ended because of it. Cristina's life was hit with just as many speed bumps as the rest of the characters, but her arc followed that which fit her most: An ascendence from talented and driven intern to a Harper Avery-nominated surgeon highly respected by her peers and making making genuinely huge medical advancements. She was never anything less than human, and she got to stay Cristina.

One of my favorite processes in Grey's history was watching them figure out what to do with Callie Torres. I'm gonna be honest, it was a bit of a trainwreck at first, and the first time I quit Grey's in a huff was right about the time they were executing that dreadful chemistry-less affair between Callie's husband George and Izzie. But a character who entered as somewhat of a shoehorned love interest eventually developed into one of the show's greatest, most magnetic characters — and one of Shondaland's best heroes.

Figuring out exactly how they did this involves the very imprecise science of analyzing Sara Ramirez' performance and the conversations in the writers' room, but the flip happened right around the time Callie developed a best friendship with Mark Sloan and started exploring her bisexuality. The character was suddenly charming, hilarious, her drama relatable and so much more real. Now I care about Callie and her happiness just as much as I ever cared about Meredith's or Cristina's, and her story is actually what brought me back to Grey's after that aforementioned quitting-in-a-huff. It's also why I'll continue to defend latter-day Grey's to all the naysayers who quit after the infamous ghost sex but before Callie hit her peak.

Willingness To Value Stories Outside That Of Its "Main" Character

If I can guarantee you one thing, it is that this show would not have lasted eleven seasons (and going) if the only person people cared about was Meredith Grey. I will likely defend Meredith as a valuable character 'til the very end, but Grey's is nothing if not an ensemble drama. This has been true since very early on, but it's especially true for for the latter half of its run so far. There have been hits and misses in this ensemble — not every character or actor is equally intriguing, to say the least. But the hits, when combined with this show's longevity, have allowed for some of the best long-term character growth I've seen on television, and for more than just Meredith Grey. This show's name requires that she'll always be at its center, but she is far from the only one keeping this ship running.

Being Willing To Write Off Dead Weight

Of course, not every new influx of characters works out. Some people just don't mesh with the rest of the cast or have the kind of spark that makes the audience care, which is where this show's revolving door comes in handy. Some actors choose to leave, which is not what I'm counting here (with the possible exception of Katherine Heigl), and it can hardly be called easy for those who are asked to leave. But whether they move away or just plain get shot or blown up or drowned in this fictional version of Seattle (which has a horrible record for safety, I must say), so many characters who just weren't clicking have said their goodbyes. It doesn't hurt that one of the episodes designed to do this — the Season 7 finale in which a shooter takes to the halls of the hospital and kills several doctors — remains one of its greatest and most arresting.

(This next photo comes with a Season 11 spoiler alert)

Grey's Anatomy has a lot of what fan culture calls "OTPs." In other words, there are plenty of people on this show who could, when paired together, be considered the loves of each others' lives. But this show understands — I'm sure partially through the necessity of needing story material when your show's going on for all of eternity — that deep, life-changing love does not always mean a romantic relationship has to last forever. Marriages end on Grey's Anatomy, and not just when an actor decides to leave the show. It doesn't mean a failed marriage — most of them have had their upsides and their solid eras (some of them epically so, like Callie and Arizona).

But when your show goes on eleven years, the fairy tale façade a lot of shows build up around their romantic relationship has a tendency to flake away — and if the show is smart about it, it happens much as it does in life, through time and trial. Grey's lets relationships end, and spends time critiquing the relationships that need work but will (likely) continue on. This show's romance reflects real life in a way a lot of shows don't: No relationship is perfect no matter how deep the love and commitment goes, and no one's safe from the massive ebbs and flows life doles out.