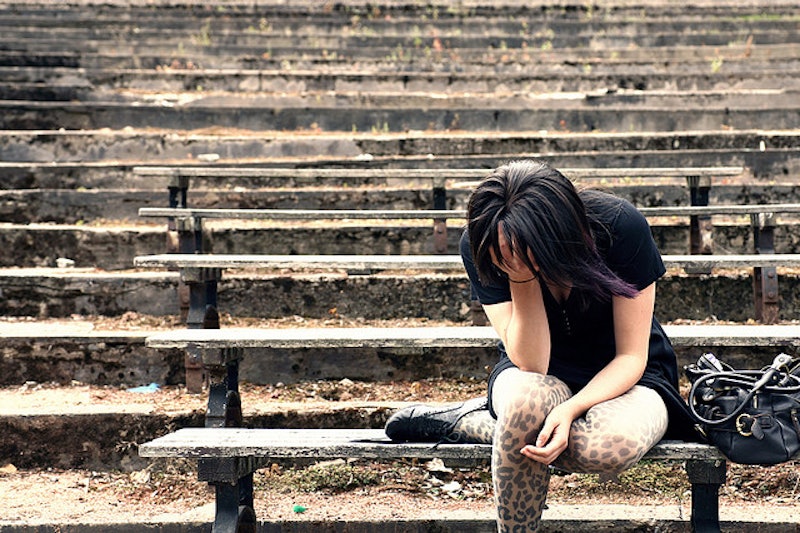 It’s part of the process: To sign up for online dating is to sign yourself up for some flops. Unfortunately, things can get way uglier than just a flop. We all have some ridiculous stories from dating on OkCupid and Tinder; the funny thing is that we never tire of hearing them, or telling them. They just don’t get old. Everyone I know who has ever met someone from the internet has had a few successes, a few failures — and then there are the true horror stories.

When I was in the fray, I very rarely went on more than one date with someone. Thankfully this was less because of anything ghastly and more because there was no real spark. That said, I do have a couple of particularly terrible stories, and so do all of my friends, and their friends, and — well, you get the idea.

Sites such as Tinder Nightmares, Bye Felipe, and Not OkCupid document abysmal messages sent from weirdos, but what about when people appear to be perfectly normal until they show up for a date? The following are some truly awful first dates, culled from women showed up and made an effort for this nonsense — and lived to tell the depressing tale.

I’ll start with my favorite dating tale of woe. My friend Mara* went on a date with a guy in New York who can only be described as someone who could star in his own personal rendition of American Psycho. He had the clenched jaw and ice blue eyes of a psychopath. Things started out fine, but it quickly became clear that this guy was a stage five crazy. Things got heavy over pizza. All he could talk about was how messed-up society is. He told Mara that she should do ayahuasca, and accused her of “not being in the moment.” Then, when she said, “Thanks for this, but I’m going to go,” he got hostile. “What? You don’t want to hang out with me? Did I do something?” he said. Mara told him, “Sometimes it works, sometimes it doesn’t; it’s not working.”

To finish things off, he started talking about how he never goes out anymore, because people always want to fight him, and that he attracts a lot of “bad energy.” She tried to leave the restaurant solo, but he left with her. Things were starting to feel kind of menacing. He walked all the way to the train with her, but thankfully didn’t insist upon taking the same train. After she finally got away from him, she texted me: “Now I’m freaking out that he spiked my Diet Coke, because he refilled it for me.” While I talked her down from the ledge on that one, real talk: this is a valid concern, because this dude was clearly insane.

2. Unstable and Married, Party of One

Or how about this one: my friend Amanda* thought she’d found a great guy online. She was living in Santa Fe; he was in Albuquerque, about an hour’s drive south. They exchanged messages for a couple of weeks. They had tons of things in common, and he was cute and smiled a lot in his photos. But every time they discussed meeting, he’d pull out at the last minute. After this happened three times, Amanda figured he was probably a scary old guy or something. But then he asked if they could have dinner. That night. In Santa Fe.

With some trepidation, Amanda met him at a taco place. From the minute he walked in, she knew something was wrong. First of all, he looked nothing like his photos. He was shorter than he’d said by several inches. Most disturbing was that he’d portrayed himself to be a happy-go-lucky kind of guy, but he was actually super glum. Within five minutes, he admitted that he’d been hesitant to meet Amanda because he was married. And had two kids. When Amanda got up to go, he started crying. When she tried to leave, he got angry. “What’s wrong with having a wife and kids?” he said. “I have needs.” She was so shaken, she worried he’d follow her home, so she followed a very meandering route and kept her eyes on the rearview mirror.

I’ll end with a story of my own, from my very short-lived experience with online dating. This one was such a nightmare because it made me so sad— the last thing you want to feel after a first date. I had lined up a date with a man who gave great profile picture. He was tall, with a strong jaw and nice eyes. We’d exchanged a handful of messages — enough to make me think he was smart and sane, and I was excited to meet him. We agreed to meet for coffee at a place in New York, where I would be writing all afternoon. My first hint that something was off was that he texted to say he’d be 20 to 25 minutes late just before our designated meeting time.

When he arrived half an hour late, he was sweaty — and smelled disgusting, like some horrifying amalgam of patchouli and body odor. He was a good 20 pounds heavier and five years older than he was in his photos. And then he proceeded to rant about clearing out his father’s apartment on the Upper West Side, how hard it is to live in New York, and a panoply of other problems for fifteen minutes. Normally I would have gotten up and left after five, but I felt really sad for this guy. He seemed really lost and alone. He also depicted himself completely differently online — so much so that I suspected he had very little self-awareness. While he was not unkind, he seemed really out of it and alone. I wound up letting him walk me to the train. When he went in for a hug, I ducked away and down the stairs. The kicker: He sent a text the next day, expressing what a lovely time he’d had.

To be sure, online dating comes with inherent peril. But perhaps the greatest issue is that it’s impossible to weed out all of the crazies from calculated photos and pithy messages alone. The same person I’d never give a second glance at a party might come off as fine online. Crazy people are part and parcel of online dating, but then again — we wouldn’t have it any other way. After all, we all love a juicy story. *All names have been changed.

More like this
10 Ways To Be More Empathetic To Your Partner
By Raven Ishak and Lexi Inks
Think Your Partner Is Cheating? These Tarot Cards May Confirm Your Suspicions
By Kristine Fellizar
Why A Libra & Libra Couple Might Become Codependent
By Kristine Fellizar
30 Clever Ways To Slide Into Your Crush's DMs
By Griffin Wynne, Carolyn Steber and Lexi Inks
Get Even More From Bustle — Sign Up For The Newsletter