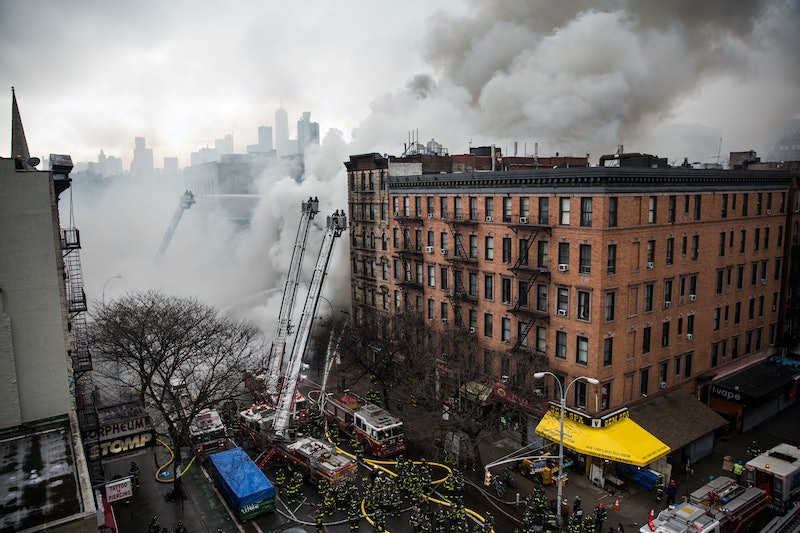 On Thursday, an explosion caused a building to partially collapse and catch fire in New York City's East Village. The destruction on 2nd Avenue and 7th Street was called into 911 at 3:17 p.m. as a possible gas explosion. The number of casualties remains unclear, but the New York Daily News reported that seven people were taken to the hospital.

The chief spokesman for the New York Fire Department, Francis X. Gribbon, told The New York Times that the first reports to the fire department was for a building collapse, with residents climbing down fire escapes and others running out of the building. By 4 p.m., it became a seven-alarm fire, meaning that about 250 firefighters were working the scene. In a press conference, Mayor Bill de Blasio said that "preliminary evidence suggests a gas-related explosion” caused by plumbing and gas work underway at 121 Second Avenue. He also said that there were no calls made beforehand about a gas leak.

The neighboring building, home to Pommes Frites, was also engulfed in flames and two other buildings were damaged, with one in danger of collapsing. The surrounding streets were blocked off by the authorities in case one of the buildings completely collapses and sends rubble flying.

Here's a timeline of the events in photos so far.

More like this
The Most Powerful Photos From The Weekend’s Abortion Rights Protests
By Melanie Mignucci
'Line Of Duty's Writer Just Dropped A Bombshell About Steve & Kate
By Catharina Cheung
15 Years Of The iPhone, In Pictures
By Emma Carey
Police Shove 'Full House' Star Jodie Sweetin At An Abortion Rights Protest
By Radhika Menon
Get Even More From Bustle — Sign Up For The Newsletter