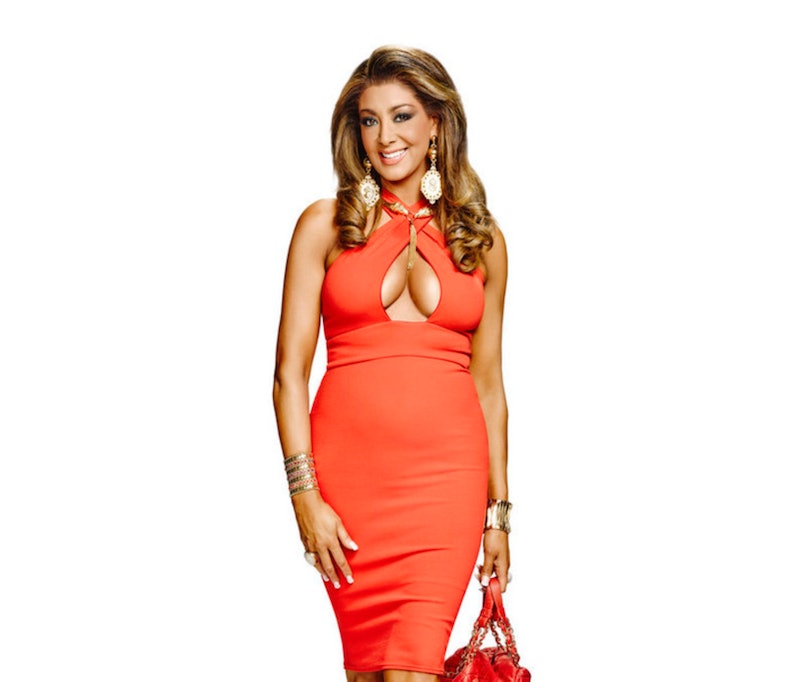 Toss on your terry cloth-lined visor and your crispest polo, because we’re going golfing, everybody in Melbourne! On Thursday night’s episode of The Real Housewives of Melbourne, a majority of the cast (where the heck were Pettifleur and Lydia? I need more Forced Family Fun Time!) attended the golf outing organized by Janet. I was very excited for this outing because it required a golf outfit. And I love it when these glamazons wear a themed outfit. I couldn’t wait to see the Melbourne Housewives’ golf costumes.

Namely, I couldn’t wait to see Gina’s golf costume. Because if I know her like I think I do, Gina isn't about to put on a pair of sensible shoes and a sweater vest. Gina is at maximum fabulousity 24/7/365. Gina doesn't do athletic wear. Gina does Gina wear.

As you may recall, in Season 1, Gina refused to wear tennis shoes at Andrea's tennis get-together. Would this be a repeat scenario? Would she wear proper footwear this time around? Or would she dig her literal heels into the grass and wear some stiletto pumps on the golf course, Gina-style?

Gina did not let me down. This is the outfit she rolled up in:

Heels! Summer dress! Perfectly coiffed hair! Not golf attire, but who caaaaares. Yeah, she was filming something after this golf event, but I would expect nothing less from Gina regardless.

Here's another screengrab of the dress:

But she didn't change right then and there in front of the other Melbourne Housewives. She excused herself to the restroom and changed into her flat footwear there. I respect that move wholeheartedly.

Even though the soles of the golf shoes were flat, Gina walked on the balls of her feet. Like she was wearing heels.

If anyone can pull off a golf shoe + summer dress combo, it's Gina.

If this show gets a third season (warning: I will be a WRECK if it doesn't), I hope one of the Melbourne Housewives decides to host a synchronized swimming party. Because you KNOW Gina would wear heels and a dress. And you KNOW the Melbourne Housewife who's hosting the part would ask her to change into a swimsuit. And you KNOW Gina would throw on a stunning monokini, leave her stilettos on, and strut into the swimming pool. Ugh, my jaw drops at the thought of it.

More like this
'The Great British Sewing Bee' Semi-Final Is Extra Special For This Reason
By El Hunt
These 10 Wild Real Housewives Fights & Moments Are Andy Cohen’s All-Time Faves
By Grace Wehniainen
Only 3 Of The One That Got Away Couples Seem To Still Be Together
By Brad Witter
Which RHODubai Housewife Has The Biggest Net Worth?
By Hugh McIntyre
Get Even More From Bustle — Sign Up For The Newsletter